God Blessed the Male and the Female – Here’s the Meaning 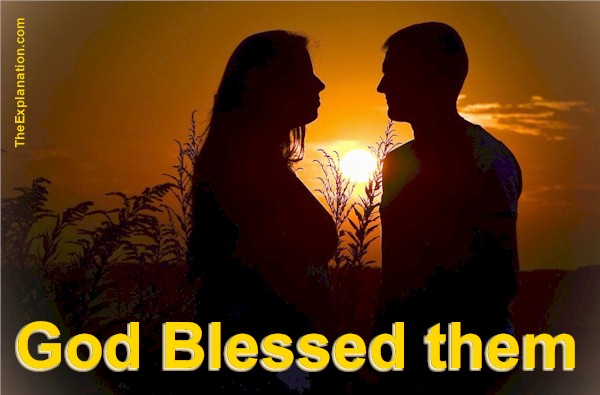 God blessed the first two humans, male and female. That blessing is the starting point of human society and social relationships.

God blessed them. What is the meaning of God blessing the male and female?

Blessed by God on the sixth day of Creation week is the act that launched human society and social relationships on Earth. For humans, it was the momentous impulsion of a growing world population and stupendous world affairs.
(Origin of Humankind, chapter 1.9)

If you’ve come across this blog post for the first time, then please know that it is part of more extensive work. To see the entire context, which you can read online, click here.
You can follow along by using the online Bible, the Interlinear Bible, Strong’s Concordance and the Hebrew/Greek Concordance at UnlockBibleMeaning.com
To understand how I’m using Biblical Hebrew, read this short presentation of 7 keys to Master Biblical Hebrew
Dig for Bible Study gems to enhance your understanding: See ‘Further Study’ suggestions at the end of this blog post.
Galacti is our fictitious time-traveling, investigative, roving reporter who lends his insights and voice to the development of the narrative
The couple blessed by God was the next step in His master plan. On the sixth day He first created individuals, male and then female (verse 27), now He establishes the twosome union. Genesis 1 is an overview. We have to add other contexts to see the details of this big picture.
In Genesis, in the beginning, God blessed the first two humans, male and female. That blessing is the starting point of human society and social relationships. Click To Tweet
God blessed the fish and fowl the previous day. Is there a difference between these two blessings?
Genesis 1:22, 28

28 And God blessed (H1288) them [male and female], and God said to them, Be fruitful, and multiply, and replenish (H4390) the Earth, and subdue it: and have dominion over the fish of the sea, and over the fowl of the air, and over every living thing that moveth upon the Earth.

Unless you look at the Biblical Hebrew, you’d never know that blessed, fruitful, and multiply in verses 22 and 28 are identical in both Hebrew and English. On the other hand, fill (verse 22) and replenish (verse 28) are identical in Hebrew–H4390, but different in English. You have to ask yourself the question, why did the translators translate blessed, (H1288), fruitful (H6509), and multiply (H7235) with the same words, but for H4390 they chose TWO DIFFERENT English words: fill and replenish for מָלֵא mâlêʼ maw-lay’?

They realized that humans are not and don’t do what animals do precisely, hence the fish and fowl fill, while humans replenish. What’s the difference? I’m going to show you how the Biblical Hebrew answers this, but first, I want you to notice a significant difference in the creation of all the fauna and the two humans.

In rereading Genesis 1:20-25, you’ll notice that God created great whales (plural), every living thing (many), fowl after their kind, beasts, cattle, creepy-crawlers after their kind. God created all these creatures abundantly (verses 20-21). The point being, God created both genders of all the animals and multiple numbers of each kind all at once. From the start of creation, there were many, many fish, birds, and animals. Impossible to say how many millions, billions of creepy-crawlers, ants, worms, who knows.

NOT SO WITH HUMAN BEINGS. For humankind, created in the image and likeness of God, He created ONE male and ONE female. This difference in numbers generated during creation week is vital. It teaches us some important principles.

Now, with the above in mind, let’s look at the meaning of blessed fish and fowl, compared to blessed humans. First things first, read Genesis 1:23-24, (click here and go to UnlockBibleMeaning.com if you don’t have your Bible handy) the creation of land animals and notice that God did NOT bless them. Hmm, why not? God blesses the creepy-crawlers, but not the cows!

בָרַךְ bârak baw-rak’; a primitive root; to kneel; by implication to bless God (as an act of adoration), and (vice versa) man (as a benefit); also (by euphemism) to curse (God or the king, as treason):

A blessing is a figurative way of saying kneeled down. We see this in Genesis 24:11, And he [Abraham’s servant] made his camels to kneel down (H1288) without the city by a well of water at the time of the evening, even the time that women go out to draw water.

In this context of the camels, H1288 has nothing to do with blessing in the traditional sense of the word. H1288 is simply a verb, to make kneel down. In Genesis 1:22 referring to the fish and fowl, God does NOT talk to the fish and fowl; essentially, He says their benefit or the way they will kneel down is by filling the water (fish) and filling the Earth (fowl). When you consider all animals, they hunt, eat, sleep, and reproduce.

Of course, it’s much more complex than that because they play an important role in ecology, as I pointed out in Audit of the Universe. But animal reproduction is NOT a decision animals make. They have a reproduction cycle that can go from all the time to once per year. But animals have no say in birth control. The animal blessing was to be able to reproduce and FILL the sea, sky, and Earth to maintain the ecological balance.

Now, look at Genesis 1:28, God blessed the couple. And God said to them, ‘… be fruitful, multiply and replenish the Earth.’ No time to broaden the subject, but God added, and subdue it, which fish, fowl, and fauna cannot do, this is specific for humans. Notice that first on the agenda; God blessed them, THEN He gave them an order: Replenish the Earth. I’ll get to replenish later because if you take this word literally, it sounds like the couple needed to REfill the Earth, which is not the case.

This blessing means God took the two individuals, male and female, and made them into one integral unit.

Wow, Sam, an inseparable couple? I don’t see that here. Correct, this is an overview. In the next chapter, Genesis 2:24, there’s a little more detail. ‘Therefore shall a man leave his father and his mother, and shall cleave unto his wife: and they shall be one flesh.’ That’s the establishment of the husband-wife ONEness, inseparableness.

This blessing means God took the two individuals, male and female, and made them into one integral unit. Matthew 19:3-8 is a corroborative context that clearly shows this means God performed a marriage. Click To Tweet

Here’s a key corroborative text that indicates that when God blessed the male and female, He performed the first-ever marriage.

Matthew 19:3-8
3 The Pharisees also came unto him [Jesus Christ], tempting him, and saying to him, Is it lawful for a man to put away his wife for every cause?
4 And he answered and said to them, Have ye not read, that he which made them at the beginning made them male and female,
5 And said, For this cause shall a man leave father and mother, and shall cleave to his wife: and they twain shall be one flesh?
6 Wherefore they are no more twain, but one flesh. What therefore God has joined together, let not man put asunder.
7 They say unto him, Why did Moses then command to give a writing of divorcement, and to put her away?
8 He saith unto them, Moses because of the hardness of your hearts suffered you to put away your wives: but from the beginning it was not so.

Did you see verse 4, ‘…at the beginning made them male and female.’ That’s the same text as Genesis 1:27. Christ is referring the Pharisees back to Genesis and the context of MARRIAGE and DIVORCE. In verse 6, ‘… what God has JOINED TOGETHER,’ that’s ‘God blessed them,’ let no man put asunder. That’s as inseparable as it gets.

However, Christ confirms there is a command about divorce in the Old Testament law (Deuteronomy 24.1), because of the HARDNESS of YOUR HEARTS, BUT in the beginning, it was NOT intended that way.

Read this post for details of hardness of your heart. Suffice to say here, those four words are the root of ALL HUMAN PROBLEMS. We shall return to this and, believe you me, expand this ad infinitum because of its relevance and importance.

When God blessed the male and female, they were joined together both physically and especially on a mind level. They were bound in marriage to form a new independent unit: a twosome group, husband and wife.

We’ve already discussed that these events of the physical description of creation have a spiritual counterpart. All of this convergence of humans and God is under the umbrella of humans, male and female, created in His image with His likeness. Again, the quoting of Ephesians 5 is necessary.

31 For this cause shall a man leave his father and mother, and shall be joined unto his wife, and they two shall be one flesh.

32 This is a great mystery: but I speak concerning Christ and the Church.

There it is, quoting the Genesis context in the beginning. The preeminent male and the appointed female The couple is now one prefiguring Christ and the Church. The mystery is great, but The Explanation, as did the Apostles and the New Testament, is helping you to solve it. There is just one Jesus Christ; hence just one male, There’s just one Church founded by Jesus; hence just one female. You cannot separate Christ from His Church, so; you cannot separate a male and female in marriage—as it was from the beginning.

The biblical beginning ideal for marriage can take no other format. Humans have the marriage institution, this fundamental structure of human society, because God set in motion when He blessed the first male and female.

In today’s society, a lot of marriages and, to a great extent, the marriage institution is in shambles. The reason is there are a lot of concrete hearts—hardness of heart—that’s the Audit of Humankind concerning marriage. The state of affairs today no more changes the original intent of marriage from the beginning than it did in Jesus’ discussion with the Pharisees.

God blessed the male and the female and opened up the way to the proper structure for human society and social relationships. Other forms, including divorce, because of humankind’s hardness of heart, if properly handled by the rules, can bring relative stability, but it cannot bear full peace and prosperity. The human record is evidence of this.

It is impossible to consider Jesus without the Church and vice versa, so the husband without the wife and vice versa are incomplete. Together, the two, in mutual love and respect, represent the whole. As with the male and the female, as with Christ and the Church.

This blog post is an excerpt from chapter 1.9 of the book Origin of Humankind.

Since you read all the way to here… you liked it. Please use the Social Network links just below to share this information from The Explanation, God Blessed the Male and the Female – Here’s the Meaning