Epigenetics – ‘Junk Genes’ Responsible for Regulating the Genes Themselves. 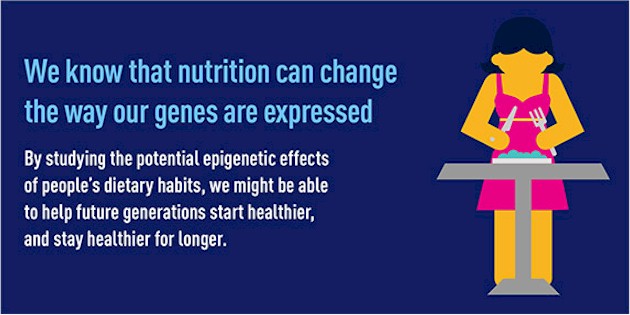 Epigenetics, the study of ‘junk genes’, has made science realize they actually regulate the genes themselves. They are at the origin of ‘gene expression’, turning genes ‘on’ and ‘off.’ Epigenetics, the study of ‘junk genes’, has made science realize they actually regulate the genes themselves. They are at the origin of ‘gene expression’, turning genes ‘on’ and ‘off.’ Image credit

We’ve discussed how DNA has a length of three billion base pairs of nucleotides, which until recently included 98.5 percent of what we referred to as junk genes. The study of this enormous extraneous segment of DNA is known as epigenetics, “epi” coming from the Greek meaning “outside of ” or “around.”
(chapter 7.14)

Scientists now realize that these nucleotides outside of the genes actually regulate the genes themselves, via chemical reactions, by turning on or off certain nucleotides in the genes in DNA and RNA.

At least 80% of 'junk genes', these nucleotides outside of the genes, actually regulate the genes themselves. Click To Tweet

Whereas the traditional view was that genes alone determined heredity, we now realize that the environment affects the 98.5 percent of nucleotides turning on or off certain portions of the genes—hence the term regulation of gene expression.

Simply put, this means that a myriad of internal body processes, as well as environmental factors (e.g., diet, sleep, stress, etc.) have a direct effect on the nucleotides that regulate how the genes express or process proteins that run your body.

Here is one of the most comprehensible definitions of epigenetics I’ve seen from Thomas Jenuwein of the Max Planck Institute of Immunobiology and Epigenetics in Freiburg, Germany:

However, each individual reader of a given book may interpret the story slightly differently, with varying emotions and projections as they continue to unfold the chapters.

In a very similar manner, epigenetics would allow different interpretations of a fixed template (the book or genetic code) and result in different read-outs, dependent upon the variable conditions (nurture) under which this template is interrogated.

If there’s one point I’d like you to retain from this definition, it is the relationship between nature and nurture that we spoke about and whether everything is genetically predetermined or whether environmental influences significantly impact who we are. Both nature and nurture—transposable elements and social behavior—shape life and our bodies, brains, and minds.

Both nature and nurture play interwoven roles in shaping our lives, bodies, brains, and minds more than we ever imagined Click To Tweet

Both play much more interwoven roles than we ever imagined, and we are only now beginning to unravel them, if they can indeed be unraveled. For now, we know that both are in play.

We know that related individuals with the same DNA can be lightly or heavily influenced by environmental factors. In this chapter about life, I am limiting myself solely to physical influences.

All the universal phenomena we’ve elaborated in previous chapters of Inventory are involved. For example, sojourns in space and especially prolonged habitation, such as on the International Space Station, affect the body; weather conditions like too much rain or not enough daylight affect melatonin and vitamin D production; drinking clean water or carbonated sugar products causes fat cells to decline or increase; and eating fresh, seasonal food or fast or processed foods in various proportions provides or deprives the body of vitamins and amino acids.

Expanding this, we can say partaking or not partaking of animal products as well as the animals’ origins and treatment has an effect on our protein and hormone intake and resultant health.

These and many other factors like sedentariness or activity, city or country, coastal or mountain, tropical or desert living, and so on affect our epigenetic makeup. Genetics and environment play critical interactive roles in our lives.

The simple examples of overweight, sedentary people or smokers with breathing difficulties being able to change their lifestyles and thereby, over a period of time, literally change the physical state of their bodies by changing their habits, reveal the impact of nurture in epigenetics.

The term plasticity is made in reference to the brain, and I will discuss this in chapter 9. For now, I submit to you that plasticity is just as appropriate when referring to epigenetics and the makeovers the human body can undergo within a lifetime and even between generations.

Our bodies are malleable; when we step back a little to think about what we put our bodies through, such as diets, pollution, stress, heavy surgery, injury, change of lifestyle, and so forth, we realize that this plasticity is not only a long-term property but a second-by-second and day-by-day attribute of physical life.

A second point to cull from Jenuwein’s definition of epigenetics is that an “individual reader of a given book may interpret the story slightly differently.” This is why fraternal twins with identical DNA end up with different readouts; they have various likes, dislikes, and experiences that give rise to different interpretations of their original DNA.

This is why even within our various races, nations, and ethnic groups with their own physical traits, every person walking the face of the Earth is an individual with his or her specific traits, which are the result of the interaction of nature and nurture.

The concept in the last sentence is as earth shaking as the idea thatNoncoding regions of DNA play a massive role in the regulation of what we are and will become. Click To Tweet

Galacti is marveling. “Since we now see that there’s plasticity in gene expression, these multitudinous possibilities of the mechanisms to express or suppress these various physical
traits of the body must all be there latently awaiting activation. I wonder how these characteristics, systems, and procedures got there in the first place.”

Multitudinous possibilities to express or suppress these various bodyily traits must all be present latently awaiting activation. Where did they come from? Click To Tweet

All I can say for now is that another discovery of science is epigenetic marks. These are markers on various parts of a gene that are comparable to volume control sliders on a music mixer board that move up and down and amplify or silence properties in a gene in conjunction with environmental influences that the body experiences.

For instance, physical activity, whether swimming or working, or nicotine intake can modify these markers over time.

And so genes, or specific sections of DNA, establish our hereditary traits with uncanny accuracy, but they are also under outside nurture influences.

Nucleotide manipulation from the not-so-junk part of our DNA is induced both from within the body and via external signals. Second by second, minute by minute, and day after day, the environmental experiences we are subject to, or put ourselves through, penetrate to these markers and modify gene expression.

Small wonder, then, that epigenetics has opened up a whole new areas to investigate. Science now recognizes that the Human Genome Project was only the tip of the double helix.

A multinational consortium has been set up, and next in line is the Human Epigenome Project, whose goal, as expressed by their website, is to “identify, catalog, and interpret genomewide DNA methylation patterns of all human genes in all major tissues.”

Methylation is a biochemical process I won’t develop here, but we now know that it plays a determining role in embryonic development. To briefly explain, the embryo is composed of one specific and famous, as well as controversial, type of cell called an embryonic stem cell.

From these cells come all the other branch or daughter cells, as we discussed above: muscle cells, neurons, epithelium, endothelium of blood vessels, and so forth. What we need to know here is that the embryonic stem cells divide and are definitively and stably differentiated by this methylation process that activates or suppresses the expression of certain genes or gene markers.

The result gives rise to each of our specific tissues. Gene expression is modulated by multiple regulatory sites located both near and far and, according to the latest findings, even within the gene itself.

The DNA code and gene and protein regulation are superlatively more multifaceted than we ever imagined. We have more questions the deeper we go and the more answers we obtain.

Consider that the FANTOM (Functional Annotation of the Mammalian Genome) project, launched in 2000 to establish a library of information about human genes, has located hundreds of thousands of regulators (e.g., promoters, enhancers, and repressors) that affect the expression of genes.

Research papers published in March 2014 attest to the levels of complexity in the locating, gathering, and assembling of DNA and RNA segments. The combinations that come from various sections of the DNA, including from within what we thought were inviolable genes and the not-junk genes, are meticulously regulated.

“You’re repeating this theme, but there’s a progression to it,” Galacti says. “Everything you’ve just pointed out tells us there’s a highly organized and complex cell and protein maintenance system in which at least 80 percent of the DNA nucleotides participate.

What we tend to call ‘gene expression’ is somewhat of a misnomer in that this expression goes far beyond the 1.5 percent of DNA we considered to be genes!”

Galacti scratches his forehead. “We have the nature-versus nurture piece of the puzzle as well and this top-down coordination, so genes are not the be-all and end-all that we think they are.”

This post is an excerpt from chapter 7.14 of Inventory of the Universe.

Below is a video, it’s clear, funny and enlightening. If you want to be entertained and learn about one on the least understood but key phenomenon in genetic transmission of hereditary characteristics then Nessa Carey is a must watch.

Below is an infographic by a very large food company. As you know, this is not for advertising purposes but because I found this document particularly simple to read and helpful to grasp this rather ethereal subject. You can click here or on the image to download the entire infograpic about epigenetics. Since you read all the way to here… you liked it. Please use the Social Network links just below to share this information from The Explanation, Epigenetics – ‘Junk Genes’ Responsible for Regulating the Genes Themselves.