A Mouse has more Genes than a Human Being – That should Humble Us. 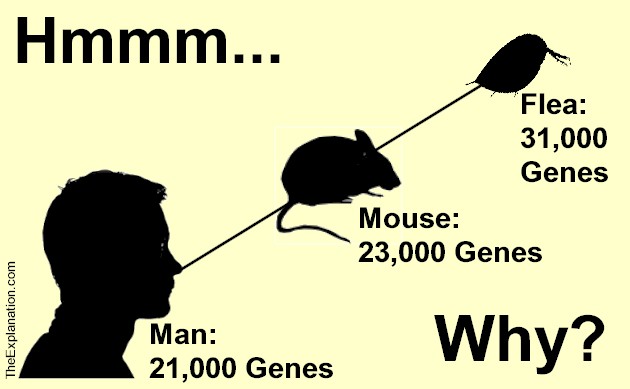 The number of genes in living organisms, humans, animals, flora does NOT correlate with intelligence. Some plants have many more genes than mankind. How do you explain that? One thing we can say for sure is that genes are certainly not the central focus of heredity. A red flag should’ve gone up with a simple numbers comparison of human genes, chromosomes, and DNA base pairs to those in other living entities.
(Inventory of the Universe, chapter 7.15)

How Many Genes, Chromosomes, and DNA  Base Pairs Do Other Organisms Have? The relative importance of numbers of chromosomes, DNA and genes in living organisms.

There must be some hidden ingredient that allows humans not only to think about but also to try to attain peace and prosperity.

You have to stop and do a double take to realize that humans are at the summit of the cognitive thinking chain, yet mice, dogs, water fleas, and even rice have more cellular parts than we do. Why does a rare flowering plant in Japan called Paris japonica have the largest genome of any living organism that we have measured?

Galacti is showing us a chromosome, a long column of base pairs and sequences color coded according to the specific genes. This chromosome, containing fifty million base pairs, is one morsel of the broad human genome and represents the first of twenty-two chromosomes sequenced by scientists, or one section in the human instruction manual.

We wonder why there is such variety in the world and why chromosomes allow the differences we see and my genome to differ from yours at about every twelve hundred to fifteen hundred A-T or C-G base pairs, and yet the basic structure is similar for all humans.

We ponder why the structure of chemical ingredients such as deoxyribose (sugar) in DNA and the small nucleotide molecules are universal.

Why is it that the structure of chemical ingredients such as deoxyribose (sugar) in DNA and the small nucleotide molecules, that give rise to such diversity, are universal? Click To Tweet

As we consider this, we reflect on animals, which also have DNA and a genome. Everything living on this earth, from wheat to bacteria to humans, possesses, in its cells, combinations of DNA. Our complex cells possess DNA in the same way as single-celled bacteria.

For example, the wheat from chapter 5 contains seventeen billion base pairs, more than five times the size of the human genome. We wonder at this as we examine a stalk of the harvested wheat under a microscope. Surely we are more complex creatures than the wheat! Does a larger genome indicate a more sophisticated organism? This is a question for chapter 10, when we discuss humans compared to animals.

What about the rudimentary, irregularly shaped Amoeba dubia that contains 670 billion base pairs of nucleotides, the blueprint for everything from its irregular one-celled shape to its tentacle-like pseudopodia that help amoebas move?

How can amoebas possibly have a larger genome than we do? We are even eclipsed by the common toad Bufo bufo with more than double our genome and 6.9 billion base pairs. To give us an idea of the scale of these genomes, a lab display shows us the marbled lungfish genome has 132.8 billion base pairs, or forty times the amount of DNA that humans have, per cell.

However, the existence of more base pairs does not necessarily indicate a more complex or smarter organism. While humans have genetic variations among populations, there are multiple combinations of DNA that differentiate us from the earthworm, the yeast, the mouse, or the fruit fly.

Although we can see in Galacti’s display the overlapping of the genes, we can also perceive the differences, and we know that we are dramatically different from an earthworm. What we don’t know is why the genes arrange to create the earthworm rather than a dog or a human.

We realize that in order for the 100 million base pairs and the genes in the six chromosomes of a nematode to combine and produce that specific organism as opposed to another is a singular event, like finding a needle in ten haystacks of DNA.

How do the base pair combinations in the DNA alphabet of a dog, which differ from a worm’s, produce the ears, nose, fur, and wagging tail of a specific dog breed, as well as the blood cells that differ from human cells? Or how do the genes control the specific head and thorax configuration of the fruit fly?

We know that the fruit flies have white eyes or red eyes depending on genetic combinations. Scientists have determined how it works, but we are more interested in the why.

Exactly how and why do the genomes and DNA produce the variations around us? Again, we turn to nitrogen, hydrogen, and the most basic elements of life inherited from the stars, but there’s something we haven’t seen yet or scientists have not discovered yet.

Science has figured out a lot of things but, exactly how and why genomes and DNA produce the variations around us is yet unanswered. Click To Tweet

I’ll divert from that intriguing hint to life itself. Peace and prosperity in a global sense have to do with human life, not grass or horses; even health, economy, and leadership are only parts of the whole. Peace and prosperity have to do with each individual life. You and I have to acquire them. First we have to know what life is and how it works—hence this Inventory of the Universe.

The realization of complexity, intricacy, organization, and stability coupled with malleability in the whole system of life makes us think that life is strong and fragile at the same time—fragile because of the one cog or even several that could disrupt the processes and create an entirely different picture of life.

We’ve investigated the mechanics of human Life: DNA, proteins, amino acids, and the genome. We examined the major elements at the beginning of this odyssey: hydrogen, oxygen, nitrogen, and carbon. Add so-called toxic elements to this composition, and you have a puzzle of human life.

We have traveled from the four basic elements to the blood contained in my fingers that activate the lab displays. But it is still a mystery how these elements come together in the right sequences to ensure both the variety of existence and existence itself.

As you breathe, as you touch this screen or book, you are aware of your own body and of everything from the twenty-two amino acids to the 100 trillion cells assembled in the correct proportions to fashion your body and brain. As you breathe, you move your body around and are curious about your own physical form now that we’ve broken it down into its most basic components.

Save or bookmark the questions we’ve posed in this chapter because they will become relevant later in the book. However, we’re moving on. Don’t stop thinking about the body, because it is our next destination on this journey.

This post is an excerpt from chapter 7.15 of Inventory of the Universe.

Today I have a couple of videos for you both from Alex. This first one gives information about this blog post discussing comparative gene sizes of various living organisms.

Nice explanation, a little technical BUT… just listen to Alex at 2 minutes where he talks about ‘4 letters: AT-CG’ that are the basic composition of every living organism. How he’s amazed at the complexity of life based on their organization. The initial image above could’ve expressed this idea as well. As he says ‘ridiculous’… except that we’re all here! How? Why?

Since you read all the way to here… you liked it. Please use the Social Network links just below to share this information from The Explanation, A Mouse has more Genes than a Human Being – That should Humble Us.