Prison Rehabilitation Effectiveness, is it Possible? 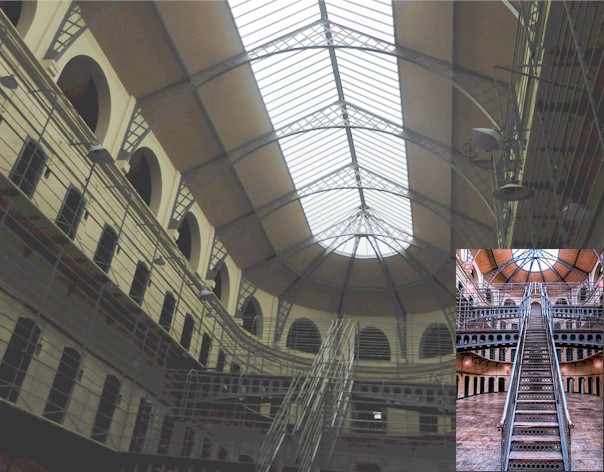 As prisons worldwide literally overflow, the major question of prison rehabilitation effectiveness hits us squarely in the face. Prison rehabilitation effectiveness—how can it be improved? How do you point men and women and even teenagers in the right life-leading direction?

I just returned from an interesting and enjoyable stay in Ireland. One of the more unusual visits I made consisted of a tour of the Kilmainham Goal or Jail.

This jail actually summarizes the rather turbulent and eventful history of Ireland, both Northern Ireland, which is a part of the United Kingdom and the Southern part of the island, the Republic of Ireland with its capital in Dublin where this jail is situated.

It’s a small country but has been fraught with inter-clan fighting, during medieval times and inter-religious strife and social upset while hit by one of the worst famines in the mid-1800’s.

The Jail has been home to prisoners on all sides of the political spectrum, including people looking for a daily meal simply trying to escape the clutches of the potato famine. One of the ‘prisoners’ was a hungry seven-year-old boy condemned for having stolen some food.

The country and the jail are recitals of the Audit of the Universe: human nature, the endeavors of man and the practice of man’s wisdom to solve social issues. The Explanation is detailing a part of the exhibit you can see should you visit this reconstructed exhibition. I thought I was just going to see a rehabilitated jail and was more than surprised to find some basic questions, like the use of the death penalty, broached on panels with a for/against vote—the number of votes against was ahead but only by a short leg. I certainly would recommend such a visit. It’s about prison rehabilitation.

In this blog post, what I want to discuss are the opposing views of two major ‘tendencies’ in society: Believers and non-believers. The first would fall into the ‘religious’ category, while the latter would fall into the ‘social’ category. Their opposing approaches reveal two different ways to try to solve problems.

The basic problem here is that of prison rehabilitation effectiveness, how to rehabilitate individuals who have gotten off of the societal pathway‘. In other words, who have committed some sort of crime, in the eyes of those who condemn the detainees.

The diversity of societies around the world including systems of justice (or injustice) and condemnations of and by itself are all other questions. In this post, I am only discussing one issue, the opposing ways of handling prison rehabilitation effectiveness with regard to prisoners. Which method to use to restore deviators to societal standards.

On the Social side (Pain – Pleasure) the plaque reads:

Jeremy Bentham, 1748-1832, A non-believer.
His regard to the reason for the prison: A Machine for Grinding Rogues Honest.

The Nature of Man:
Men are rational, sensory beings who judge all things in terms of pleasure and pain. It follows that Man’s thought and behavior can be controlled through the senses.
Government exists to create a system of rewards (pleasures) and punishments (pain) in a way that promotes the greatest happiness of the greatest number in society.

The Function of Prison:
To create a totally controlled environment in which deviant behavior can be remodeled or reconditioned into socially acceptable behavior.

The Means are:
A new kind of prison design (The Panopticon, or ‘all-seeing eye’) that controls all aspects of the prisoner’s sensory experience. The includes separation in cells, constant observation, the rule of silence.

On the Religious side (Sin – Penitence) the plaque reads:

John Howard, 1727-1790, A Christian
I could not enjoy my ease and leisure in neglect of an opportunity offered me by providence of attempting the relief of the miserable

The Nature of Man:
All men are sinners.

The Function of Prison:
A means of enforcing repentance and reformation on evil-doers.

The Means are:
The prevention of ‘communities of vice’ by separate confinement in cells.
The bringing to bear of strong moral influence for reformation of the isolated prison (the Chaplain, the Bible)

There you have it, two concepts of human nature, of how men and women function at their most fundamental level, their motivations, desires, and inclinations. The ‘social man’  judges all things in terms of pleasure and pain, while the ‘religious man’ is a sinner.

On the one hand, the social man’s ‘behavior can be remodeled’ and on the other, the religious man needs ‘enforcing of repentance and reformation’

In Audit of the Universe, I broach the impact of ‘social’ and ‘religion’ on society today. In religion, the terms ‘conversion‘ is used to refer to religious rehabilitation. From a social point of view I’ve coined a phrase ‘secular conversion’ to refer to non-religious methods, or, as we’d call them today, ‘social methods‘ to rehabilitate people.

I believe we can say the motivation and desires of both parties are praiseworthy. We would definitely like to see all people act in a more worthy way.

We have both social and religious workers helping remodel behavior and teaching repentance and reformation and look at the results.

Do your own analysis, I don’t want you to take for granted what I think or may write. Look at it for yourself, you decide whether prison rehabilitation effectiveness is happening. In this sophisticated age of social and religious welfare, are we and can we reach the goal of correcting the wrongdoing-ways of those unfortunate enough to wind up in prison?

These subjects are basic questions The Explanation asks and answers.

Since you read all the way to here… you liked it. Please use the Social Network links just below to share this information from The Explanation, Prison Rehabilitation Effectiveness, is it Possible?