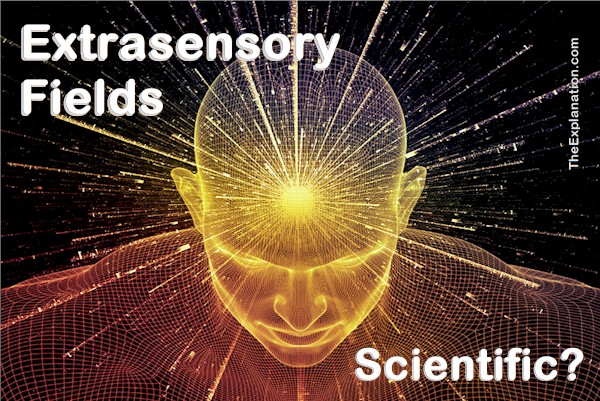 Extrasensory is a phenomenon that cannot be measured by any scientific methods. The question is, does it exist?

Extrasensory fields. Do they really exist? Are they scientific or just a hoax?

Extrasensory perception is a well-known practice. Often associated with magic or even black magic. It sets off arguments between classical scientists and alternative scientists. Some would say, charlatans.
(Audit of Humankind, chapter 5.11)

This paranormal activity is at the center of some of the biggest TV programs today. We hear about it but is it true? Sensory science feels it’s a hoax but can we say for sure there’s something, whatever it might be, beyond the scope of our normal five senses? If so, that puts sensory science in a bind with regard to a full explanation of the universe. In fact, it opens up Pandora’s Box for science and most people’s worldview.

Throughout Audit of the Universe, I’ve tried to avoid giving Sam Kneller’s opinion on controversial subjects. I’ve interjected my thoughts and reflections but have tried to remain as objective as possible. To discuss extrasensory phenomena, I’m practically going to turn this post over to Lynne McTaggart and a resume of her book, The Field. Her original profession was that of a journalist. She straightforwardly admits to not being a scientist, but she is a tremendous investigative journalist. The Field is the story of her progressive project of tracking down extrasensory perception for a purely scientific explanation.

Let me say, from the start, The Explanation does not concur with some of Lynne McTaggart’s conclusions and certainly not with her present practice. However, this resume of her quest is scientific and follows the trail of traditional scientists who, because of their accidental discoveries, tumbled into the realm of the extrasensory field.

It starts off with the realization that in the metaphysical realm of telepathy, regression psychology, out-of-body experiences, beyond the hype and trickery, there is enough evidence to warrant investigation. To try to simplify, telepathy presupposes the transmission of data from one person to another over a distance which can be halfway around the world. From a scientific point of view this brings up the question, is there anything that literally joins 2 people halfway around the world from each other?

And the amazing scientific answer is yes! The Field. At this point in McTaggart’s quest, it put her in touch with Hal Puthoff and the zero-point-field. A scientific name for what we’d call a vacuum. To cut a long story short, a vacuum is not empty. We consider a space to be a vacuum if there are no, or very few, atoms. However, quantum physics considers atoms and quarks as packets of energy. These packets oscillate on fields. These fields are in perpetual movement. The consequence of this is that even Outer Space, which is supposedly mostly a vacuum, is actually full of oscillating fields.

I realize that this is difficult to grasp. Even the Wikipedia author of Puthoff’s article seems to be cynical. However, the concept of oscillating fields crisscrossing the entire universe is an accepted fact in quantum physics circles.

The next step was to understand if data or information could be transported rapidly, even instantaneously, by these fields over small or large distances. In quantum terms, this is called entanglement. The idea being that these information-carrying fields are intermingled. It’s like typing an SMS and then sending it via a different medium, electromagnetic radio waves, to the receiver’s mobile phone.

McTaggart consulted Jacques Benveniste, who had experimented with the memory of water. He too was a classical scientist until he ran into this strange but provable phenomenon. He too was rejected by classical science as you can see via the linked video. He found that chemical substances have a unique energetic frequency. Water can transmit biological information in the form of its frequency. Further experiments proved that water has an electromagnetic memory system like a tape recorder which therefore stored this frequency, and that biological data could even be transmitted over phone lines. Other scientists have subsequently repeated his experiments.

When you think about this, it has huge implications regarding the human brain and body. Being composed of so much water, what we have considered as chemical reactions are actually electromagnetic transmissions between cells. We’re talking about quantum physics, oscillations, and fields within our bodies, even of which our bodies are composed. This is incredible depth into understanding.

McTaggart’s next step was to take a closer look at brain research. In particular, the relationship of the brain to how it received and transmitted information. She was in contact with Karl Pribram, who had discovered that the brain responds to only a limited bandwidth of frequencies (we now know this is 0.5 to about 42 hertz). What is happening is that biological and other information in the form of energy waves, which are specific frequencies, are being carried and transmitted via the quantum fields.

McTaggart is now involved in helping people discover and exploit this avenue. If you wish to pursue that course, a link to her book is available. She delves into information about the holographic brain, memory, mind, and consciousness and how this could all be in The Field. However, The Explanation stops at this juncture. In chapters nine of both Inventory and Audit of the Universe, I pointed out that mind is separate from the brain. In that, The Explanation shares an idea with McTaggart. But, not beyond that. The whole goal of this post is to reveal that there is scientific evidence for extrasensory activity within and beyond the body and the brain.

This is a very controversial subject as we’ve seen specifically with the example of Jacques Benveniste. in 2019, 30 years after his initial findings, his work is now proven and accepted. Science has come a long way, but it still rejects the extrasensory and paranormal aspects.

Extrasensory really has a double meaning. Firstly, it refers to quantum phenomena which are beginning to be more and more accepted in scientific circles. Secondly, it refers to what some would call spiritual phenomena. These are activities that have no sensory explanation whatsoever, not even quantum explanations. For instance, miracles, like the virgin birth, (if they exist) would fall in this category, which we will discuss in the fourth and final part of this chapter devoted to religion.

Lynne McTaggart spent years of journalistic uncovering and went a long way to discover the underlying scientific evidence for certain extrasensory phenomena. We now know that what she discovered is at the heart of quantum physics. The field is actually one of many fields that are part of the Quantum Field Theory. It considers particles as excited states (quanta) of their underlying fields, which are—in a sense—more fundamental than the basic particles.

So far, this is the best theory that science has developed to explain the universe and life. It is a new scientific paradigm, especially for the uninitiated like you and me. Where we have to be careful, this is what’s hard, to sort out what is true science from fake science. Extrasensory science, as we’ve seen with Jacques Benveniste, is a very fine mixture that can fool even sensory scientists.

This blog post is an excerpt from chapter 5.11 of Audit of Humankind.

Since you read all the way to here… you liked it. Please use the Social Network links just below to share this information from The Explanation, Extrasensory Fields in Spiritual Science. A Brief History