Limits of Science. Origin of the Universe and Mind? 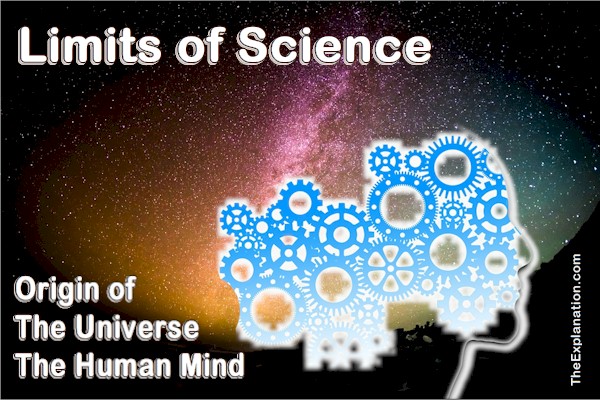 Limits of science. The paradox of incredible progress coupled with hitting the material barrier where there’s no more matter to investigate.

Limits of science. This discipline uncovers knowledge of the physical universe of which humankind seems to be the highest intelligence. Science limits itself to the visible, measurable and testable. We’ve reached the quanta level, We don’t have the tools to go beyond, assuming there is more matter to be discovered.
(Audit of Humankind, chapter 5.12)

Myriads of words have been written about science. The pros and cons. Its feats and prowess and the limits of science. The intention of The Explanation is not to repeat or even to add to those words. Don’t lose sight of our quest. How can human beings bring peace and prosperity to Earth? This 14th and final chapter of Audit of the Universe discusses whether the best human reasoning can accomplish this daunting task. It asks the question whether experience, philosophy, science and in the next section, religion can find a solution.

Science has brought much to the table towards answering the deeper questions in life. The last two posts about quantum fields in both material and non-material spheres are the epitomai of this type of knowledge. To realize that everything in the Universe consists of packages of energy is truly mind boggling, in my opinion. It is taking the point-wave theory to its culmination.

How the energy is propagated as a wave and when we measure it, we’re only measuring one specific point on that wave. In a nutshell, science defines how that is possible and it’s majestic. We cannot and must not take anything away from the incredible contribution science has made to humanity and, indeed, the quest for peace and prosperity.

Conversely, we need to consciously (use of this word intended) be aware of the fact, not fiction, of the limits of science. The definition of science itself tells us that.

These limitations (of science) are based on the fact that a hypothesis must be testable and falsifiable and that experiments and observations be repeatable. This places certain topics beyond the reach of the scientific method. Science cannot prove or refute the existence of God or any other supernatural entity.

For instance, at the heart of modern cosmology is a mystery: Why does our universe appear so exquisitely fine-tuned to create the exact conditions necessary for life? Some use this to prove there’s an intelligence (G/god) behind these circumstances. And some others have explanations to the contrary. In science, as in so many other disciplines, you have anything and everything.

And within this vast mystery that revolves around the questions and theories related to our Universe lies the crux of the issue. How humans reason. How we discover facts, how we establish facts, how we use facts and how we interpret facts.

The limits of science are such that reasoning scientists are human beings, and their reasoning runs into exactly the same hurdles and barriers as any other group of the population. What is a fact and how to deal with facts?

I will let David Tong sum up the situation when it comes to the Universe, the matter it contains and where we’re at today. The end of this video lecture sums up the limits of science. We’ve undoubtedly hit the limits of discoverable physical matter. What next?

The demise of the Mind controversy

Science is many folded. Cognitive science studies the human mind, bringing together insights from the associated sciences of linguistics, neuroscience, artificial intelligence, philosophy, anthropology, and psychology. It is one, if not the only of the last frontiers of science left to conquer.

In this ultimate section about the limits of science, I’ve chosen the Universe and the Human Mind for a particular reason. The former being the outermost part of what is materially known with the latter being the innermost part of what humans are. The two extremes. According to physical science, the Universe somehow gave birth to the Mind which can, in turn, contemplate the Universe. It’s like we’ve gone full circle from a straight line (Universe to Mind). Now Mind meets Universe, and everything else is within that circle.

I present this because when scientists talk about the Theory of Everything, it includes the equations, laws, and mathematics about the Universe from the smallest to the largest. But it in no way includes anything to do with human nature, free will, behavior, and the human mind. Science’s last frontier of discovery, the mind, is an attempt to fill this gap. But will it be added to the Theory of Everything? I leave that for you to answer.

The Explanation, as you know, is a big proponent of the Universe and an even bigger proponent of the Human Mind. The Theory of Everything must include the Human Mind and, in fact, linguistics, neuroscience, artificial intelligence, philosophy, anthropology, and psychology. Otherwise, it’s incomplete. The limits of science don’t even permit it to broach the origin of the interconnection of Natural Science (the Universe) and Social Science (the Human Mind). Yet, peace and prosperity depend entirely on both of these branches of science. They must be brought into harmony.

The Explanation will go beyond the limits of science and bring both these branches together. It will help you discover the coherent completeness between the Universe and the Human Mind. It will show you why the two ends of the straight line bend to form a circle. How the Universe and Human Mind were made to meet. In fact, they must meet or there’s no point to the story of the Universe and Humankind. In fact, if you want to jump … way ahead … The Explanation is already broaching this exact subject in Origin of Humankind.

But back to the limits of science and the mind. Frankly, I prefer to let scientists give you their viewpoint to show that some have simply accepted the fact that a human being might not be able to comprehend itself. We simply might be incapable of analyzing and understanding what the human mind is and how it works.

Listen to eight minutes of Steven Pinker on the Mind and Consciousness.

Here’s a transcript of the last minute or so. The conclusion of this part of the interview.

I’m suggesting namely there may just be some facts about the universe that are true and we’ll never be satisfied that we intuitively understand them. Not because there is some mystery in the sense of undiscovered scientific principle, but just that our very way of grasping reality might make certain things puzzling to us even though we know at a more explicit cognitive level that they’re true.

So a heap of neurons that registers the environment, that organizes the information, acts on it including a model of itself from my point of view. It feels like something. Why that should be true I don’t know but then again, here I am inside me and almost by definition there’s going to be some things about the view of me inside me that the me doing the viewing is not going to be able to articulate because the part that would do the articulating is part of the me trying to explain it. (laughter)

I think there are some cases where human intuition hits a wall and this is one of them. The nature of time. What could have been before the Big Bang if that was the beginning of everything? How can the universe be either finite or infinite? There’s no reason to think that every aspect of reality will be intuitive. There may be some aspects where our best science will give us a characterization and we’ll always scratch our head as we appreciate that it’s true, but it never feels totally satisfying.

Steven Pinker thinks we may never get a satisfactory answer to the question of Human Mind. As I’ve written before, science has oriented the study of the mind to computational analysis.

One of the key proponents of this concept is Yuval Harari. He goes further, eliminating one of the key characteristics associated with the human mind, free will. Thirty-two minutes into this video he says,

The dilemma in the 21st century. Science now tells us there is no free will (32.40 let the information flow freely and let individuals etc make their own decisions.) and feelings are biochemical algorithms. given enough data and computing power, an external system can understand me better than I understand myself. Organisms are algorithms and algorithms can hack organisms.

Many other scientists readily disagree with Yuval and prone the human mind as being an entity outside the physical realm. They clearly state that the memory is in the mind. One such scientist is Alan Wallace.

Another scientist will have the final word about the limits of science. The title of Noson Yanofsky’s book is enlightening not just for science but for the key subject of this chapter, the limits to human reasoning, The Outer Limits of Reason.

Many books explain what is known about the universe. This book investigates what cannot be known. Rather than exploring the amazing facts that science, mathematics, and reason have revealed to us, this work studies what science, mathematics, and reason tell us cannot be revealed. In The Outer Limits of Reason, Noson Yanofsky considers what cannot be predicted, described, or known, and what will never be understood. He discusses the limitations of computers, physics, logic, and our own thought processes.

Yanofsky describes simple tasks that would take computers trillions of centuries to complete and other problems that computers can never solve; perfectly formed English sentences that make no sense; different levels of infinity; the bizarre world of the quantum; the relevance of relativity theory; the causes of chaos theory; math problems that cannot be solved by normal means; and statements that are true but cannot be proven. He explains the limitations of our intuitions about the world—our ideas about space, time, and motion, and the complex relationship between the knower and the known.

This blog post is an excerpt from chapter 5.12 of Audit of Humankind.

Since you read all the way to here… you liked it. Please use the Social Network links just below to share this information from The Explanation, Limits of Science. Origin of the Universe and Mind?