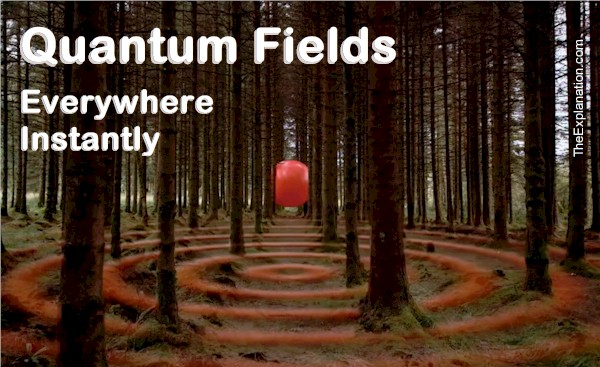 Quantum fields, and how they function dumbfound scientists. Science understands how they work. Now it’s your turn.

Quantum fields, the quantum wave, moving in all directions at the same time.

Quantum fields are certainly one of the most fascinating subjects in the realm of physics if not in all knowledge. I will illustrate what I mean with an example from Inventory of the Universe. In chapter 7, Human Life, we broached protein folding. How it’s possible for a chain of hundreds of amino acids to fold into an intricate protein machine in a millionth of a second. Amazing, when I wrote that a few years ago I had no idea how it was possible.
(Audit of Humankind, chapter 5.10)

Well, quantum fields are the answer. Not that this is any less amazing, to the contrary. In this chapter, we’ve discussed the controversy around science. But, let’s not forget there’s been tremendous progress and research has made discoveries that have far-reaching implications. Quantum fields are key to what is unfolding with The Explanation. The next books are Origin of the Universe and Origin of Humankind. We cannot discuss origins without understanding what is at the very base of the pyramid. What substance, or as it’s referred to, fields, quantum fields, is the Universe composed of. I’ll be referring back to quantum fields in Origin of Humankind. Let’s understand what you and I are composed of.

As science and physics have progressed over the past couple of centuries, scientists have searched for answers. Always trying to look for the simplified common denominator that neatly tied everything together. The most fundamental well-known structure of matter is the atom. Here’s the Bohr model, which is what a lot of us are familiar with.

The Bohr model changed as we had electronic equipment that peered deeper and deeper into the atom. Electronic microscopes and the very sophisticated Large Hadron Collider revealed that protons and neutrons (in the nucleus of an atom) were made of even tinier particles called quarks. Quarks and electrons are the tiniest visible, measurable pieces of our Universe. They are known as fundamental particles. Because they are particles, I entitled this Sensory Science. Quarks and electrons can be detected by our senses. They are obviously invisible to the naked eye, but we can see them with the right equipment. This is in opposition to Spiritual Science, which I’ll evoke next week.

The next jump was understanding that the particles are not only point particles but ALSO waves. Frankly, this is where it begins to get weird. Why? because particles are physical or material whereas waves are not material, they’re invisible. The term quanta, from which we get quantity, means small packets, in this case, of energy. That’s how we now describe quarks and electrons. These minute packages of energy are the building blocks of our Universe.

Here’s another short video that graphically explains the basis of quantum physics.

This next video by David Tong, Quantum Fields: The Real Building Blocks of the Universe is a must see. It’s a lecture that brings quantum physics to an understandable level. He covers a lot of ground. It’s a lecture that you almost need to listen to a few times to absorb the important basic scientific knowledge he disseminates. If you haven’t heard or are not aware of quantum fields, they will turn your world upside down.

Here are a few pointers:

The fundamental building blocks, out of which all the material universe is made, are nebulous and abstract. They are fluid-like substances, the quantum fields, which are spread throughout the entire universe and ripple in strange and interesting ways. The ripples and waves of this fluid get tied into little bundles of energy by rules of quantum mechanics, and those bundles of energy are what we call particles like electrons. Get your mind around that.

David Tong explains that what we think of like a vacuum when all air is removed and nothing remains is actually seething with activity. There are quantum vacuum fluctuations. You’ll see an animation of this about 23 minutes into the video, and he says they are very complicated. These fluctuations can be measured so we know they’re there. They are the quantum fields and are so complicated; we don’t know where to begin in how to explain them. Just try to get your mind around the fact that a vacuum is full of activity and there’s plenty of stuff there.

The bottom line here is that the reality of quantum fields is a revolutionary idea regarding the understanding of what solid matter really is. Not solid at all. But rather vibrations of intermingled fields throughout the universe. Frankly, it’s a concept that is very difficult to grasp.

This last video, yes, there are a number today because they do an excellent job explaining such a complex subject, is also a must-see. Professor Al-Khalili has a whole series of videos in the Spark series and they’re all worth watching. This one is very practical because it shows us graphically quantum fields in action. How robins use their eyes to capture information from the electromagnetic fields to navigate during migration.

There’s the example of the method by which a tadpole transforms into a frog and how quantum fields play a role in breaking down the collagen in their tails. This is very similar to apoptosis, or the loss of cells of the web-like hands of a fetus, to form the fingers that I discussed in Inventory of the Universe. The most amazing part of this video, in my opinion, is at 37 minutes when discussing photosynthesis and how energy particles from the sun travel across a plant by wave smearing. Instead of blindly trying to find their way to their destination, they ripple in every direction at the same time.

Each energy particle follows ALL paths to a cell at the same time. You can’t say it goes from A to B, in a straight line, it doesn’t. The featured image above shows this quantum field wave and how it spreads out in every direction at the same time. Consider that these vibrational waves are jiggling billions of atoms and molecules simultaneously.

David Tong ends his lecture by displaying a short, but complicated, mathematical equation. He says that every single experiment ever done by scientists can be explained by this equation. That it’s the best, most complete presentation of the universe we have today. As I wrote above, we want to encapsulate our understanding in the simplest presentation possible.

But, scientists know, and David Tong admits, there is much that is not understood, many problems that have not been resolved. It seems the deeper we go, the more complex it gets. And indeed that’s the case. Next week we’ll see there’s a spiritual science dimension that most sensory scientists are not willing to assume.

Vibration is energy. Energy is vibration. What does vibrate then?

The moderator of the physics Q and A section closed comments on this question.

This question appears to be off-topic. The users who voted to close gave this specific reason:

Yes, it is probably not mainstream physics. But what if we asked the question, what is dark matter or dark energy? Just like vibrations, we know that, like quantum fields, dark matter and energy are there. But, we’ve never seen or measured them. They are mathematical calculations that fit into the quantum physics equation. They beg answers which today we are not able to supply. But tomorrow there will be answers.

This blog post is an excerpt from chapter 5.10 of the book Audit of Humankind.

Since you read all the way to here… you liked it. Please use the Social Network links just below to share this information from The Explanation, Quantum fields in Sensory Science. A Very Brief History