Fallen from Heaven – The Fate of Lucifer 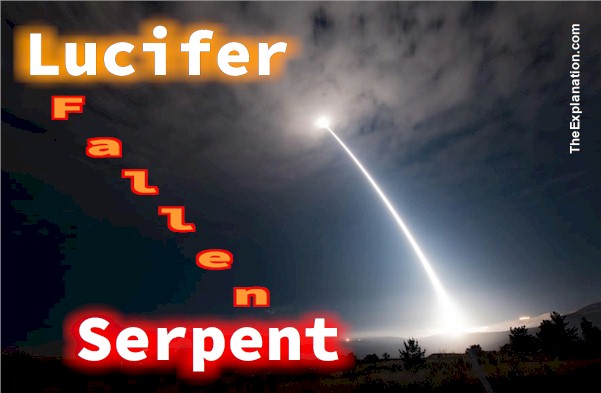 Fallen, or cast out of the third heaven, Lucifer undergoes a name makeover. Serpent is the new name of this former Cherub; this reflects its deceptive nature.

Fallen from Heaven. Cast to Earth. Lucifer has its name changed to Serpent. Nachach the Enchanter.

Fallen from heaven is the fate reserved for this high-ranking spirit being in Ezekiel 28. In verse 16-17, God casts it to the ground, to Earth. In this first duality context, we saw the reference to the powerful King of Tyre paralleled by a powerhouse Cherub who was very close to God’s throne until it followed a downward spiral of iniquity into oblivion.
(Origin of the Universe, chapter 7.6)

In this second scenario in Isaiah 14, we find a similar dual context. The text starts out referring to the king of Babylon and in verse 12, fades in to a detrimental character entitled Lucifer in the King James Bible. Different translations (NIV, God’s Word, Complete Jewish Bible) refer to it as the morning star, son of the dawn. Lucifer, from the Latin lux and fere, means light bearer/bringer. We shall see the implication of bringing light when we discuss the first day of creation. Keep in mind what we just read in Ezekiel 28.17 about the Cherub: “…you have corrupted your wisdom by reason of your brightness.”

4 That you [Isaiah] shalt take up this proverb against the king of Babylon, [Nebuchadnezar] and say, How has the oppressor ceased! the golden city ceased!

11 Your pomp is brought down to the grave, and the noise of your viols: the worm is spread under you, and the worms cover you.

12 How are you fallen from heaven, O Lucifer (H1966 see Further Study below), son of the morning! how are you cut down to the ground, which did weaken the nations!

13 For you have said in your heart, I will ascend into heaven, I will exalt my throne above the stars of God: I will sit also upon the mount of the congregation, in the sides of the north:

14 I will ascend above the heights of the clouds; I will be like the most High.

15 Yet you shalt be brought down to hell, to the sides of the pit.

16 They that see you shall narrowly look upon you, and consider you, saying, Is this the man that made the earth to tremble, that did shake kingdoms;

17 That made the world as a wilderness, and destroyed the cities thereof; that opened not the house of his prisoners?

Who was Lucifer, and what happened?

The inducer of a rebellion the likes of which we have never seen, “I will ascend to heaven; I will raise my throne above the stars of God; I will sit enthroned on the mount of assembly, on the utmost heights of the sacred mountain. I will ascend above the tops of the clouds; I will make myself like the Most High” (vs. 13-14). Imagine the unimaginable, Lucifer imagining, having reached the point where he had convinced itself, it can replace God.

The term Lucifer is only used once in the Biblical Hebrew Old Testament in Isaiah 14:12. It is a flashback to past times with a rapid–very rapid–explanation of this light-giving Cherub. There’s more space devoted to his downfall and an enormous amount of space to the new role it plays in God’s plan. This new role is wrapped up in a name.

Names change because an individual’s character changes. A key to understanding is: Names define who the individual is who carries a name. In Hebrew, it’s much more than just a physical identifier like a social security number. A Biblical Hebrew name tells a lot about who the person is from a character point of view.

The first direct Bible reference to this fallen Cherub is Genesis 3:1 with a new name: “Now, the serpent (H5175) was more subtil than any beast of the field …”

Check out the meaning of enchanter: a person who uses magic or sorcery, especially to put someone or something under a spell. An individual who manipulates other individuals under their control. If you know the nature of the serpent, even considering his intervention with Adam and Eve. That’s precisely what it did. It’s new names: Serpent, dragon, devil describe it’s character to a tee.

The light bringer is now the dark bringer; the total character makeover is visible in its name change.

Here is the forerunner of the coup d’état; this being became ridden with violence and corrupt with power, remember Ezek. 28:16: “…you were filled with violence, and you sinned.” No wonder the New Testament tells us that Lucifer, there referred to as the fallen devil, became the father of liars and murderers (John 8:44).

It succumbed to negative preferences that it allowed to well up within itself. The magnificently created Lucifer put together a plan to overthrow the one true Creator who sat (and who still sits) on the throne of the spiritual and physical universe. If you are reading this for the first time, I’ll grant you this is hard to believe; this sounds stranger than any story or science fiction novel you’ve ever read. Yet, it’s right there in your Bible.

Galacti is all excited: So, when we bond the two contexts in Ezekiel and Isaiah, we see from the fade-in descriptions that together they’re talking about the same powerful spirit being. The Cherub is Lucifer; Lucifer is the Cherub. It started wonderfully and, by its own volition, extinguished his bright light into dark obscurity, transforming its wisdom into foolishness, truth into lies, life-helper into a murderer. It hit rock bottom, twisted, warped, perverted so much so that it felt it could replace God, its very Creator. Unimaginable, but that’s Bible reality. It became the fallen Serpent.

Lucifer is the Cherub. It started wonderfully and, by its own volition, extinguished his bright light into dark obscurity, transforming its wisdom into foolishness and truth into lies. Click To Tweet

Cinema and electronic games have made interstellar warfare rather routine subjects.  Interplanetary conflict is, however, anything but banal. To combat, one must first put together a fighting force. In the somewhat enigmatic chapter 12 of Revelation there is the distinct indication that Lucifer, now referred to as Satan which means Adversary, (evidence that it had fallen) garnered one-third of the angels to his cause, “…an enormous red dragon (The great dragon…that ancient serpent called the devil, or Satan, who leads the whole world astray, Rev 12:9)…his tail swept a third of the stars [angels] out of the sky…” (Rev 12:3-4).

On different occasions, the devil has and will use this incredible fighting machine to wreak havoc on a heavenly scale, “And there was war in heaven. Michael and his angels (this is another spirit being and a heavenly army faithful to their Creator God), fought against the dragon, and the dragon and his angels (the third of the stars from verse 4) fought back. But, he was not strong enough, and they lost their place in heaven (Sam: fallen). The great dragon was hurled down…” (Rev 12:7-9).

No created being, no matter how powerful it is, can defeat God, their Creator. However, the unleashed destructive energy of such a confrontation defies the imagination and certainly the penmanship of this author. This warfare, instigated by the Dragon, Lucifer, Satan, produced the tohu and bohu.

No created being, no matter how powerful it is, can defeat God, their Creator. However, the unleashed destructive energy of such a confrontation instigated by the Dragon produced ‘tohu and bohu.’ Click To Tweet

This blog post is an excerpt from chapter 7.6 of the book Origin of the Universe

At UnlockBibleMeaning.com, go to Isaiah 14:12 and look at the Biblical Hebrew for Lucifer (H1966) and its root H1984. H1984-Halal reveals one of the Keys to mastering Biblical Hebrew. The key that one Biblical Hebrew word describes OPPOSITE CHARACTERISTICS. Here, this root has the contrasting meanings: shine and boast, celebrate and fool, praise and rage.

This opposition is important because it shows the dual nature that can characterize all beings (human and spiritual) who possess free will. It also explains why such beings possess the trait of the plasticity of mind; this allows intelligent beings to make and change decisions, for better or worse. That is the essence of free will, and Biblical Hebrew is the quintessence of this by plasticity with vocabulary that can express BOTH sides of human and spirit nature.

There’s no way to see this in a language other than Biblical Hebrew. And frankly, most who refer to Biblical Hebrew don’t understand this key of the plasticity of the language and miss the meaning of the Bible.

הָלַל hâlal haw-lal’; a primitive root; to be clear (orig. of sound, but usually of color); to shine; hence, to make ashow, to boast; and thus to be (clamorously) foolish; to rave; causatively, to celebrate; also to stultify:
KJV – (make) boast (self), celebrate, commend, (deal, make), fool(-ish, -ly), glory, give (light), be (make, feign self) mad (against), give in marriage, (sing, be worthy of) praise, rage, renowned, shine.

I don’t want to get too deeply into this next point here, but in this same verse, Isaiah 14:12, in the same context, we find the term fallen (H5307) from heaven.

Since you read all the way to here… you liked it. Please use the Social Network links just below to share this information from The Explanation, Fallen from Heaven – The Fate of Lucifer