Each Biblical Hebrew Word is a Precious Jewel to be Discovered 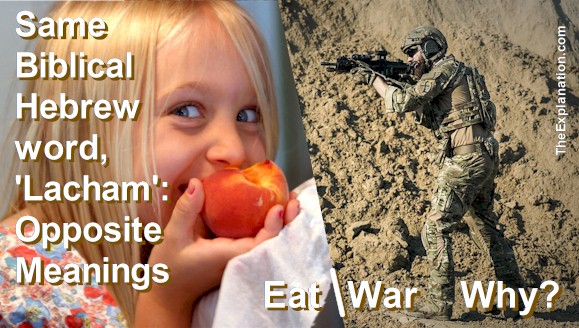 A Biblical Hebrew word is like a door, waiting to be pried open, eager to ramble across the threshold and explore the dazzle of a thrilling discovery. The same Biblical Hebrew word, ‘lacham’ means both ‘eat’ and ‘war’. How can the same word have such opposite meanings?

Each Biblical Hebrew word is like a rough stone to be dug up, cleaned off and viewed under a magnifying glass to reveal its glitter and perfection. We continue with four more principles to master Biblical Hebrew: Points 2-5
(Origin of the Universe, chapter 3.2.2)

I suggest you read part one of this series here: Fullness of Biblical Hebrew

2. A Biblical Hebrew word can have Opposite Meanings

Here’s a word most people are aware of: elohim. If you asked someone for its translation I think 100% of the time you’d hear ‘God’ and that is correct. But it can also refer to angels, judges, gods and goddess.

In Gen 31.30 the translation ‘gods’ refers to idols. Ex 12.12 talks about the ‘gods’ of Egypt using the word elohim. Obviously this has nothing to do with ‘God’ (whether you believe in idols and God or not). In fact, even the context shows that ‘gods of Egypt’ is the opposite as the verse says the Lord will smite their gods-elohim.

Go to UnlockBibleMeaning.com and check Psalm 82:6, human-beings are called ‘elohim’… how do you explain that? As an added interesting biblical fact, in the New Testament we see the term ‘god of this world’ (2 Cor 4.4) with the Greek ‘Theos’ which refers to ‘God’ but in this verse, God is in opposition to ‘god’. Do you know who this ‘god of this world’ is (even from a literary point of view)?

Thinking that ‘elohim’ is ‘God’ is correct, but that comprehension is not complete. Not understanding the total opposition of the meaning of Hebrew words can lead to serious misunderstandings. This is just one point in what I refer to as coherent completeness. Elohim = God is correct but INcomplete.

Furthermore, these ‘oppositions’ go further, in that they teach us lessons about life. Another translation example amongst dozens that I’ll show you how to spot in the Bible course: The biblical Hebrew word for ‘eat’ and ‘war’ is ‘lacham’, the common word used in modern Hebrew today for bread derives from this: lechem. We all eat, basically every day, even multiple time in a day. It is one of the most common human activities. Why is the same Hebrew word also used for ‘war’?

In Biblical Hebrew 'eat' and 'war' come from the same word: 'lachem'. Why such different concepts? Click To Tweet

Why did the author leave such ambiguity? What is the implication of this?

3. The same Biblical Hebrew word can have both a Concrete and Abstract meaning.

How would you express ‘hand’ on a piece of paper or stone? You’d draw its outline, A hand is very ‘concrete’ you can see and touch it, you can easily picture it and envision its outline. But now, how would you represent the concept of success, or the idea, ‘you did it’. Well, you could use a variation of something concrete to denote a notion, sentiment or feeling like this: 👍 thumbs up. Just like the sentiment of love is expressed with a very concrete and tangible heart ❤. We’re even using the word ‘concrete’ (cement and gravel) here in an abstract way.

Today we use all sorts of pictograms, icons and smilies and think this is a ‘modern’ form of expression, In fact it goes back to the origins of written language itself when the formation of alphabets began.

Biblical Hebrew goes back to those origins when letters and root words represented concrete, tangible, visible items like a: hand, house or a head 🤦. A Biblical Hebrew word is replete with the concrete expressing the abstract. Here are just a few examples:

Like today we use a light bulb 💡 to depict a ‘bright idea’ or that Eureka, eye-opening, aha moment. The real and visible representing sentient and invisible.

The English word ‘head’ comes from the Hebrew ‘rosh’. Here’s how ‘rosh’ is translated in various places in the King James version of the Bible: band, beginning, captain, chapiter, chief(-est place, man, things), company, end,  excellent, first, forefront, (be-)head, height, (on) high(-est part, (priest)),  principal, ruler, sum, top. Did you know that the first word of the Bible, in the book of Genesis, is actually this word ‘head’ (beraisheet … slightly different pronunciation which I’ll explain later), there translated by probably the best known Bible quotation: “in the beginning…”.

Understanding some of the 17 translated words above in your native language helps comprehend that this ‘beginning’ is somehow related to the notion ‘excellent’, another rendering of this same Hebrew word. I won’t get into the association of these two variant translations for the same Hebrew word now, suffice to say, there’s a relationship.

But this is important considering the very next verse in Gen 1.2 tells us: the earth was ‘without form and void’. If the beginning is associated with ‘excellent’ how do we explain the presence of this chaos? This is what I mean by grasping some meaning from a translation, but not full comprehension. As a result, Gen 1.1 has more interpretations than ever … and if you get the first sentence in a story wrong, how can you really understand the rest? You’ve missed a key point.

For now, retain this third key: That the concrete, tangible, physical words that your hands can reach out and touch like ‘head’ represent abstract conceptual ideas that emanate from the mind like ‘excellent’. We shall see the relevance of this key shortly, when I get into Gen 1.1.

4. The same Biblical Hebrew word can have both a Literal and Figurative meaning

This is not unique to Hebrew, we find it in English and other languages too. For example:

Case in point: Gen 1.2 where we read: darkness was upon the face of the deep. I will show you, and you can check it for yourself, but not only was there ‘absence of light’ but darkness figuratively means to destroy, and make a noise.

If all you grasp from this verse is the literal ‘darkness’, you’ve missed at least half of the meaning which is not transmitted by the translations. And it’s quite possible that the figurative comprehension might be equally if not more important than the literal translation. What have destruction and noise got to do with creation? What is the implication of this? What does it do for comprehension when we miss 50% of the author’s meaning?

5. Names of men and women have meaning

Just one example. Noah, as you know, was instrumental, the main character, in the story of the worldwide flood that covered even the mountains. I’m just repeating what the book of Genesis says. Whether you believe it’s true, a legend, a lie or if you’ve never read it or can’t make up you mind, doesn’t matter at this time. There are numerous statements in the Bible that say there was a flood.

What I want to draw your attention to is that the word ‘noah’, yes, with a small ‘n’. It is first and foremost a derivative of a Biblical Hebrew word ‘nooach’–not just a name. This word ‘noah’, and its other derivatives, are used over 70 times and they have been translated by: cease, be confederate, lay, let down, (be) quiet, remain, (cause to, be at, give, have, make to) rest, set down.

When you understand just this one point you can realize that a recent blockbuster film which depicts God and Noah as putting a definitive end to all of mankind is incorrect. Yes, God destroyed mankind, at that time, according to the Bible story (it doesn’t matter now whether you believe this piece of literature or not) but, if you understand the meaning of Noah’s name you realize that somewhere in this story, there are ‘quiet and rest’.

Maybe you don’t understand how and where the ‘quiet and rest’ fit in (that’s where ‘Unlock Bible Meaning’ comes into play) but, if you know the meaning of Noah’s name, the central figure in this account, that should give us a certain comfort. It also should make us wonder why a man named ‘quiet and rest’ was the key figure in a massive destruction.

Two major questions that are misunderstood, with regard to the flood episode, are:

Coupled with this is the concept from point 3 that these names can have both literal and figurative aspects to them. The point being that one name, identity, descriptive for a man or woman can have multiple meanings.

Translations capitalize the ‘word identifying an individual’ (Noah) and we tend to take it solely as a name. Well, in Biblical Hebrew, there is no capitalization! It’s just another word like all the others including all the nuances that these 7 keys to mastering Biblical Hebrew will unlock for better Bible understanding.

For now, incredible as it might sound, whether you believe it or not, the meaning of ‘Noah’—referring to comfort, and that whole episode, as gruesome, as you might consider it, has some incredibly comforting lessons.

But, you’ll have to be a little patient until we reach Genesis 6. There is so much to unlock before then to put the Bible story in context and give its theological perspective.

Last 2 keys to master Biblical Hebrew next week. I suggest you read the third part of this series here: Roots to anchor Bible comprehension

This blog post is an excerpt from chapter 3.2.2 of Origin of the Universe

Since you read all the way to here… you liked it. Please use the Social Network links just below to share this information from The Explanation, Each Biblical Hebrew Word is a Precious Jewel to be Discovered