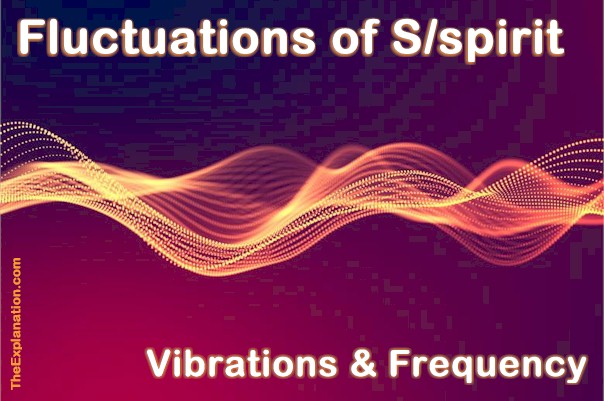 Fluctuations of the power of the Spirit of God and the spirit of humans and the Universe are Bible reality. Here’s why.

We’ve discussed how God’s Spirit moved on the face of the waters. There’s an interface between the spiritual world of God (His Spirit) and the physical world of humankind on Earth. In other words, between God’s Spirit, quantum energy packets, and the spirit in humans (Job 32:8). According to the Bible, there are two different but related phenomena that are real and interactive. We’ve established the following regarding spirit.
(Mind-Body Problem Solved, Chapter 31 – Table of Contents)

Ruach, Strong’s H7307, starting in Genesis by moving over physical water and ending in Revelation as the Power of spiritual conversion, sets the stage for the whole story of the Spiritual working with the physical.

Now for an additional contour in the shape of the ruach puzzle piece. The fluctuations of the spirit. How its power changes; turning it up and down, as we’d say with a dimmer switch on a light. Yes, this sounds strange, but let’s take a look.

Notice the fluctuating nature of R/ruach. God can modulate its power, that’s fluctuations. The translations used for ruach indicate this: air, breath, wind, windy, blast, tempest, whirlwind. That list of modulations goes crescendo. Once again, this is not Sam Kneller’s idea. All I’ve done is take the KJV translations we find for Strong’s H7307 and placed them in ascending rather than alphabetical order, which is what Strong does.

From air to whirlwind, with increasing speed and directional movement. From the stillness of air to the tourbillon of a tornado or hurricane. From the silence and tranquility of the eye of a cyclone to the din and uproar of its outer towering thunderstorms. Notice also that wind and breath (unless in icy cold conditions) are invisible, while a whirlwind is visible to the naked eye. Now that you know this Bible fact of fluctuations of the Spirit of God, you will see it in your study.

Here are a few verses that refer to the Spirit, even if they don’t all directly use that word. Search for others at UnlockBibleMeaning.com

The Spirit of the LORD came upon him [Samson] mightily, so that he tore him [a lion] as one tears a young goat though he had nothing in his hand…

An ordinary man can’t rip up a lion. With the additional power of a certain amount of the Spirit, this becomes possible.

Zechariah 4:6 Then he [God] said to me [the prophet Zechariah], This is the word of the LORD to Zerubbabel saying, ‘Not by might nor by power, but by My Spirit,’ says the LORD of hosts.

Not by human power, but by God’s Power. This reminds us of Mark 5:30 where Jesus immediately recognizes that some of His spiritual Power transferred to a woman with an issue of blood and healed this physical problem instantaneously. Christ’s Power diminishes, transferred to transforming the physical. This variation of the Power of the Spirit of God and its impact on the material is a reality. Through God’s Spiritual Power, Zerubbabel rebuilt the Temple in Jerusalem following the return from the Babylonian exile.

In Mark 9:28-29. The disciples could not cast out a powerful demon (even demons have authority). “And when he [Jesus] was come into the house, his disciples asked him privately, Why could not we cast him [the powerful demon] out? And he said to them, This kind can come forth by nothing, but by prayer and fasting.” The implication is the disciples did not have enough spiritual power. One way to receive more of God’s Spirit power is by prayer and fasting.

Here is another example of fluctuations with the added solution of how to maintain, stabilize, and increase the power of God’s Spirit.

Christ was brimful with the Power of the Spirit, as John 3:34 tells us “For he whom God has sent speaks the words of God: for God gives not the Spirit by measure to him.” This is the fullness of the Holy Spirit also referred to in Acts 10:38 “You know of Jesus of Nazareth, how God anointed Him with the Holy Spirit and with power, and how He went about doing good and healing all who were oppressed by the Devil, for God was with Him.”

This power is the means whereby the spiritual acts on the physical. It is what makes miracles miraculous. Human beings can receive this same Power of the Spirit in proportion to the role God calls them to accomplish. Some receive more, some less, these are the fluctuations.

4 Now there are diversities of gifts, but the same Spirit.

7 But the manifestation of the Spirit is given to every man to profit withal.

8 For to one is given by the Spirit the word of wisdom; to another the word of knowledge by the same Spirit;

11 But all these work that one and the selfsame Spirit, dividing to every man severally as he will.

In chapter 23, We discussed the ability, dunamis, and power that every human possesses because of the spirit in humans.

And unto one he gave five talents, to another two, and to another one; to every man according to his several ability (G1411); and straightway took his journey.

Do you see the modulation of God’s power? The different levels of power or energy needed for the following results? Various abilities, skills, talents, and mighty works.

For our gospel came not to you in word only, but also in power, and in the Holy Ghost, and in much assurance; as you know what manner of men we were among you for your sake.

The Apostle Paul spoke words in Thessalonica. And, through the power of the Spirit, he did much more than that. He had the assurance to speak boldly despite persecution (1 Thes. 2:2). Paul referred to the possibility of quenching (lowered fluctuations) of the Spirit (2 Thes. 5:19). He noted that there is also the wrong use of this spiritual power (2 Thes. 2:9 – G1411), talking about a false prophet with all power and signs and lying wonders. Someone filled with much more negative power (this power is not from God but instead from Satan) than others in their entourage.

The Biblical Hebrew word ruach represents both the spiritual and the physical. It represents power or energy that fluctuates, flutters, and shakes. Question: On the physical level, how can we express this? I’d suggest:

Fluctuations of Waves or Frequencies

Sound, light, movement, sea waves, heartbeats, breathing, a pneumatic drill, and a mixer all have cycles or frequencies and waves. They have regular motion. We can feel the recurring pulse of a heartbeat and see the wave pattern at the seaside. Other systematic movements, like a swing, pendulum, and printer head, take longer. Light oscillations are so rapid and short-lived that it is impossible to see the individual waves; we see them as a beam or stream. This short video is a practical example of wave fluctuations.

I don’t want to get into too much physics here, but let’s realize that all this oscillating movement (vibrations) is because there’s more or less energy involved. It takes more energy to keep your TV functioning than a light bulb. There are more varieties and quantities of fluctuating vibrations going on in your TV than in your light bulb. Expressed another way, we could talk in terms of vibrations and frequencies as well. That’s where it begins to get intricate. To keep it simple, it takes more power and different circuits to run a TV compared to a light bulb.

They are two different environments, but the key is to see there’s a continuity between the two. Spiritual God created physical Earth; God’s Spirit moved on the waters. That Spirit flutters and fluctuates from the transformation of Earth to the healing of a woman with an issue of blood to distributing joy and hope, just as waters can be still, rippled, or tumultuous with waves depending on the energy deployed. So, Earth is transformed, or healing is accomplished depending on the amount of Spirit deployed.

This video will give you some idea of the intricacies of frequencies and fluctuations, and the vibrations behind the energy of our physical world.

The spirit realm consists of an unbelievable variety of power that goes far, far beyond our imagination and descriptive possibilities. Similarly, the physical realm is also an incredible variety of energy that goes far, far beyond what we imagined. An image of a black hole in outer space has been published. An incredible feat. Due, in part, to the energy of gravitational waves that bend light. Another testimony to the immense power of the physical universe.

The Explanation is bringing the spiritual and the physical into coherent completeness. This fascinating subject will continue.

Since you read all the way to here… you liked it. Please use the Social Network links just below to share this information from The Explanation, Fluctuations of S/spirit. Astonishing: Vibrations & Frequency