Energy, the Astounding Origin of Our Material World 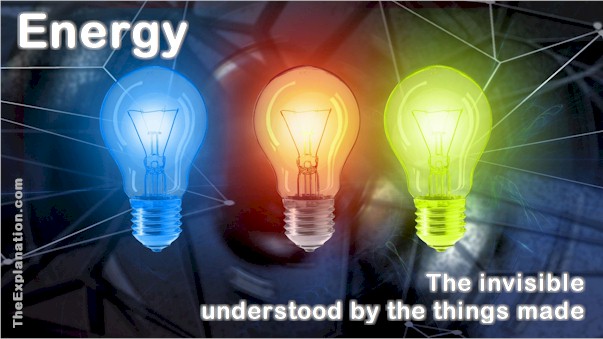 Energy spheres are the source of our material world. Our solid physical foundation isn’t solid at all. Its composition is so tiny, that it will always be invisible.

24 But Thomas, one of the twelve, called Didymus, was not with them when Jesus came.

26 And after eight days again his disciples were within, and Thomas with them: then came Jesus, the doors being shut, and stood in the midst, and said, Peace be unto you.

28 And Thomas answered and said to him, My Lord and my God.

29 Jesus said to him, Thomas, because you have seen me, you have believed: blessed are they that have not seen, and yet have believed.

30 And many other signs truly did Jesus in the presence of his disciples, which are not written in this book:

31 But these are written, that you might believe that Jesus is the Christ, the Son of God; and that believing you might have life through his name.

The above example is Biblical spiritual and physical reality. Christ’s physical body was put in a burial cavern, He rose as God, a Spirit Being, and entered rooms with closed doors. He appeared and disappeared, transforming from one state to another, at will.

There has to be an interconnection between the spirit and the physical realms. That role is occupied by the ruach-spirit. In our physical world, this has a small s. The Power of God’s Holy Spirit produces the invisible spirit which takes on two forms.

This diagram helps focus on this setup. 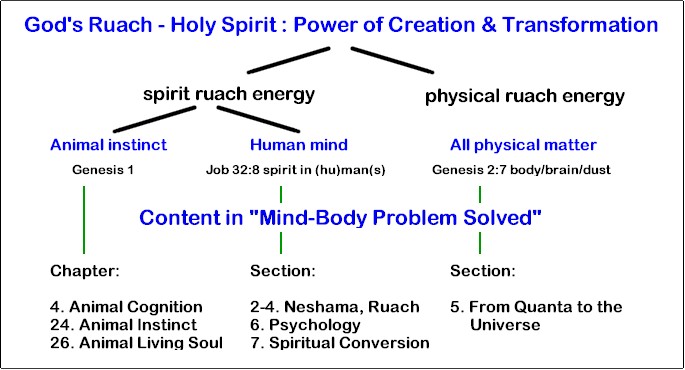 The Material World from nothing or what?

Science cannot answer this question but it recognizes that in not answering it, there’s a significant problem. This quote comes from Wikipedia. I realize that some people don’t appreciate Wikipedia, especially on such profound scientific issues. It is layman science I’m using it to make this information as accessible as possible.

Vacuum fluctuations appear as virtual particles, which are always created in particle-antiparticle pairs. Since they are created spontaneously without a source of energy, vacuum fluctuations and virtual particles are said to violate the conservation of energy. This is theoretically allowable because the particles annihilate each other within a time limit determined by the uncertainty principle so they are not directly observable.

The law of conservation of energy, first proposed and tested by Émilie du Châtelet, means that energy can neither be created nor destroyed; rather, it can only be transformed or transferred from one form to another.

The theory, as expounded by the above quote, says that vacuum fluctuations (the minutest form of energy) are created spontaneously without a source of energy leads to the often-heard conclusion. Something from nothing. If you are interested in this debate, do an internet search for something from nothing in science.

ruach solves both these most fundamental problems. It is spirit energy that gives rise to quantum fluctuations: something from something. It is spiritual energy converted to physical energy thus respecting the law of conservation of energy.

The nature of the minutest form of energy, quantum fluctuations

Sam’s confession: I’m going to try and do something. I don’t know how exact this is scientifically and I don’t know if I can make it understandable for readers. Consider It a draft that will need revisions and editing. Here’s a layman’s explanation of quantum physics :). No equations, just concepts to understand how the physical world is constructed. Wow!!

The same Wikipedia article above starts with this phrase. Please forget about all the jargon.

In quantum physics, a quantum fluctuation (also known as a vacuum state fluctuation or vacuum fluctuation) is the temporary random change in the amount of energy in a point in space.

The first concept. Focus on point in space. In my opinion, understanding starts with grasping what this point or pinpoint is. It’s the SMALLEST possible space. This point is impossible to calculate. The shortest length so far is the Planck length 1.6 x 10-35 meters (the number 16 preceded by 34 zeroes and a decimal point). Don’t try to figure it out, but this length is used in various aspects of physics. Just realize the point is tiny, tiny, tiny. So, how many points are there in the universe?!!

This brings us to the second concept. Quantum field. When we use the term field, we conjure up a two-dimensional image like a soccer field. This is further lodged into our minds by two-dimensional graphics of magnetic fields. Science, though, describes a quantum field as a fluid. In other words, something that completely fills any container.

It’s everywhere at the same time. It’s THREE-dimensional. Now, try to get your head around this. The three-dimensional space is fully occupied by all those Planck length points from our first concept. That’s a lot of points, whatever the space! Imagine it’s the entire Universe filled with these tiny points, that’s the quantum field.

The third concept. Quantum fluctuations. The quote above explains what this is, random change in the amount of energy in a point. So, EACH of those minuscule points is emitting energy. Let’s pause here and consider what’s happening. What does a point emitting energy look like?

Any point emitting energy resembles a firecracker exploding, or the tip of an antenna emitting waves.

Remember, this image is two-dimensional (width and height). But, in reality, the explosion is three-dimensional (including depth). This is what it means when you throw a pebble into a pond; you see TWO-dimensional ripples spreading out from the point of impact, but the reality is, the ripples ALSO spread out in the water BELOW and the air ABOVE, we just don’t see them. It’s really THREE-dimensional ripples. Even the word ripples is misleading because of its two-dimensional implication.

Often, here’s the way these points are presented graphically as a quantum field. it is TWO-dimensional.

Graphic presentations have their limitations and therefore, we, the uninitiated in this complex dimension can have misinformed ideas. Thus similar to the fields, waves are very often present in TWO-dimensions.

This is normal, the image of vibrations and TV waves in the last chapter are presented this way. but, it is vital to realize that, in reality, this is not the case. Points of energy and waves are up-down, right-left, and everywhere in-between.

I’m going to coin a couple of terms here to help us grasp what I’m trying to show. energy spheres (what science calls energy packets, particle-like packets) and sphering. Here’s the point (oops). Every single one of those minuscule points is a quantum sphere, emitting energy in ALL directions like blowing up a balloon. It expands in a spherical shape. Hence the term sphering energy.

A quantum wave smearing itself out across the cell. The energy doesn’t simply move from A to B, it heads in every direction at the same time. it’s spreading itself out as a wave so that it can explore all possible routes simultaneously. This strikes at the very heart of what’s so strange about quantum mechanics.

The wave is following all paths at the same time that’s what gives it such incredible efficiency. It’s trying every route to the reaction center at once; it’s bound to find the fastest possible way to deliver its energy.

This video will start with the above concept, but I suggest you watch the entire video to get a better understanding of quantum physics in everyday life.

To describe this movement of energy, science uses terms like fluctuations, ripples, smearing, spreading itself out, all possible routes simultaneously. The only way this can happen is by what I call sphering. The energy expands like the explosion of a firecracker covering all space in every direction. It’s an inflating sphere, it’s sphering.

Here’s one of the reasons why I’m explaining this. Once you grasp the concept of sphering, you immediately understand that each INDIVIDUAL point sphere intersects and interacts with every other sphere! This sphering energy is in the form of waves.

Now I want to take your imagination to the nth level. Imagine that each sphering point can emit energy

on EVERY FREQUENCY, from the lowest of low to the highest of high. All the waves are superimposed one on the other filling the Universe. As the energy spheres intersect they INTERACT (see the image). bringing into existence all the MATTER in the Universe.

Science has revealed the smallest of small. We can’t see it, but we know it’s there. There’s no such thing as a space with nothing. Today we know a vacuum (an item from which all air has been removed) is not empty. The above quote gives a description of what’s happening.

In quantum physics, a quantum fluctuation (also known as a vacuum state fluctuation or vacuum fluctuation) is the temporary random change in the amount of energy in a point in space,

In the accompanying image, we

visualize the physical fluctuations in a vacuum. The sphering of energy spheres all those points that constitute the quantum fluid. Please note this animation is within a cube so we picture the visible physical fluctuations/vibrations hitting the side. In reality, there is no side to SPACE, these fluctuations continue on their way ad infinitum filling the entire Universe.

For the invisible things of him from the creation of the world are clearly seen, being understood by the things that are made (Sam: the visible things), even his eternal power and Godhead; so that they are without excuse:

For further information about energy composed of quantum spheres, see.

Since you read all the way to here… you liked it. Please use the Social Network links just below to share this information from The Explanation, Energy, the Astounding Origin of Our Material World