The Incredible Universe and the Forces Holding It Together 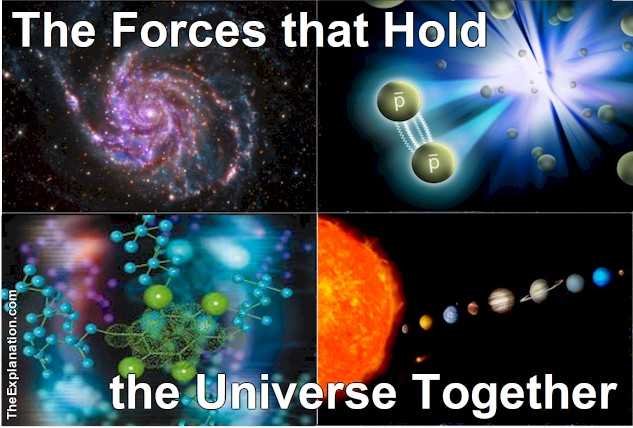 The Four Main Forces Holding the Universe Together

In the nuclear realm of the Universe, that of atoms, we’ve identified three amazing forces that organize the elementary particles—this microworld which is composed of composite particles and atoms that populated the original space microseconds after Big Bang. The Four Powerhouse Forces that Hold the Universe Together: Strong, Weak, Electromagnetic Forces and Gravity.

Now, 13.8 billion years later, they fill the macroworld, an observable universe with a diameter of ninety-three billion light-years (8.8×1026 meters). These three forces of the microworld are carried by elementary waves and particles. We’ll leave gravity—which organizes the macroworld—out of the picture for now.
(chapter 1.5-6) The Strong force, Weak force and Electromagnetic force are the three forces
that ensure the stability of all physical substances.

The chart above gives some details of, and the image below from the digital library of the universe shows these forces and gravity maintaining the equilibrium of your average, garden-variety atoms and, indeed, the entire universe. a proton, with the strong force
represented by the wavy lines holding together the three quarks like glue;

To the left is our familiar image of a proton, with the strong force represented by the wavy lines holding together the three quarks like glue.

What’s even more amazing is that the strong force is the gluon, a massless, weightless particle/wave. It is an entirely different animal than electromagnetism, a concept with which Galacti and you are familiar. Electromagnetic particles/waves are electric charges with two states: positive and negative.

Gluons are entirely different. Gluons have three charges or “colors” that are different than any of the other forces. More importantly, these forces are unique: they can act only on quarks within the range of an atom’s nucleus.

Even more implausibly, their pull increases as quarks get further away from each other—unlike magnets, which are easily separated the farther apart they get. Not so with quarks—the farther apart they are, the more attracted they are to one another—absence truly does make the quark grow fonder.

Galacti recalls that quarks were separate in the Big Bang, and he could therefore see them. In the present, we cannot separate two quarks long enough for one to be visible. Even though we can splinter a proton with a billion-volt charged beam of electrons, quarks remain “glued” to each other by means of the strong force.

A Chat between Galacti and the Author

“Let me be personal here,” I interrupt Galacti in the present. “I’m neither a scientist nor a mathematician. I find this subject fascinating and stimulating, but once it goes any deeper, I’m lost!”

“Then why delve into this subject?” Galacti is brimming with curiosity.

“In order to search for The Explanation, we need to know something about where we came from and the environment in which we grew up,” I opine.

“‘We’ as in the human species?” Galacti guesses. I grin. “That’s right. This chapter and this first book set the stage. They give us the background, without which we can’t give a suitable Explanation arriving at a proper conclusion.”

“Only to a point,” I reply. “This background information is not intended to explore the minutest aspects of everycog and wheel. When you change the oil in a car, you don’t have to know how many times per minute the pistons pump up and down in the chambers.”

“What’s important is that the Big Bang seemed to unfold in a way that set up the forces of the universe as we know it, and did so in such a way as to create the conditions of life that we’ll talk about later in the book. With this initiation into the workings of the Big Bang and other phenomena, we won’t go into any more detail than you’ve done with your report. We’ll just set the stage,” Galacti agrees, “After all, there are many books and you’ll probably include some in the bibliography, yes?”

“That’s right,” I say, “as well as TV documentaries, movies, and seminars explaining the details with graphic animations that our audience can view with the same wonder you experienced witnessing the Big Bang.”

“Not the exact same wonderment,” Galacti interjects.
“Indeed not!

However, I think the background information will jolt us out of our day-to-day lives. As we say in France, our “métro, boulot, dodo” (underground, work, sleep) modern world. In other words, the daily grind. In this book, we’re stepping away from that.

We’re taking Inventory of the Universe and having a closer look at what makes our environment, near and far, tick. And I want our readers to be thinking about how intricately intertwined our universe is.

Do we realize that, in the vastness of the relative strengths (1 to 1038) and range (10-18 to infinity) of these four fundamental forces that govern the entire universe that, if we modify them in the slightest, our universe would simply not exist? There would be no stable atoms; no compact astral bodies.

That does get us away from “métro, boulot, dodo,” and even farther—away from our city, our country, our continent, our planet, and even our galaxy. Our tunnel vision of our pimples and warts gives us a distorted image of what the big picture really is.”

“You mean things like life, our place on Earth, Earth’s place in the galaxy, and how the galaxy fits into the universe,” expands Galacti.

“Yes. If we want big answers to big questions, then we need to start by bringing the big picture further into focus.” “So I should conclude my description of elementary particles,” Galacti finishes.

This post is an excerpt from chapter 1.5-6 of Inventory of the Universe.

Since you read all the way to here… you liked it. Please use the Social Network links just below to share this information from The Explanation, The Incredible Universe and the Forces Holding It Together