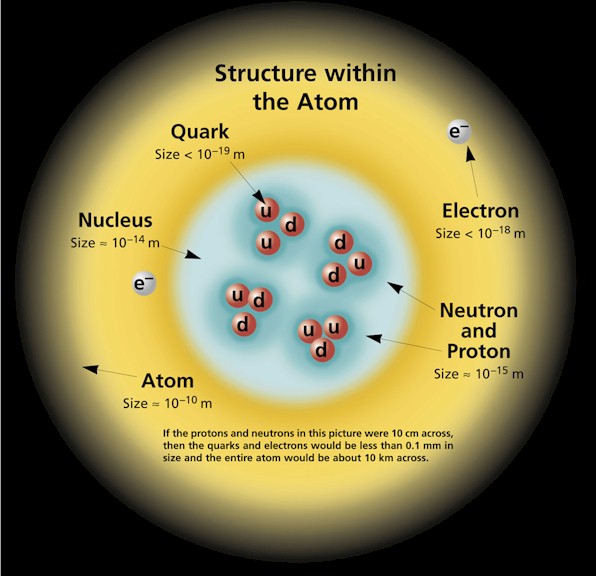 The first atoms protons neutrons and electrons. Big Bang… and our Universe is on its way… and what a way. Structure within the atom with protons, neutrons and electrons. in fact, an atom is mostly air… and that’s the basis of every animate and inanimate object in the universe.

As the Big Bang pinhead expands, creating space for short-lived elementary particles to move, they collide into each other, decaying into composite particles compiled of two or three quarks. These are more stable living combinations called “hadrons,” as in the Large Hadron Collider, and they fall into two categories: mesons and baryons.
(Inventory of the Universe, chapter 1.3-4)

Galacti reports that most mesons and baryons last for a fraction of a second, but we are constantly discovering new ones. Further, Galacti illustrates the myriad varieties of baryons and mesons that can be composed of any combination of six quarks or six leptons, with the maximum possible number of such composite particles calculated at a staggering 66.

As of the publication of this book, we’ve discovered thirty two types of mesons and forty types of baryons, with more undoubtedly to follow thanks to the aid of the LHC. There remains good potential for new findings.

Within the baryon group we find two well-known friends: protons and neutrons. As the Big Bang pinhead expands, creating space for short-lived elementary particles to move, they collide into each other, decaying into composite particles compiled of two or three quarks.

Among these, only protons are stable, with a life span estimated at 1033 years. All the rest have lives in the split-seconds except for the neutron in one particular situation: when it combines with a proton to form the nucleus of an atom.

Galacti realizes that these same miniscule particles, along with the elementary electron, form the paper or electronic screen on which these words appear. In fact, they form all future matter and every single inanimate and animate object in the entire universe. Quarks and Leptons, Elementary Particles, combine to form Composite Particles of Protons, Neutrons and Electrons… and we have Atoms.

Atoms are on their way. We’re now 10-6 seconds—or one-millionth of a second—after the Big Bang. The temperature has dropped, but is still at a whopping 1013 or ten trillion degrees. The entire universe now has a diameter of six million kilometers, which is about the size of our present solar system. Imagine all this taking place in one-millionth of a second!

Inside that single solar-system-sized space, the elementary particles are flitting about, careening into each other, and decaying into composite particles. Quarks adhere to each other, flipping into protons and neutrons like the most miniscule roller derby.

One proton and one electron are attracted to each other, and the first hydrogen atom exists.

The proton inside this hydrogen atom is 1,837 times heavier than the orbiting electron; almost the same mass and size as a neutron, which we find in other atoms. However, as massive as protons are, they’re infinitesimal, with a size in the minitude of 2.5 × 10−15 meters—mini-mini miniscule!

From the digital library of the universe, we find the image below: a helium atom composed of two heavy protons (dark gray), two heavy neutrons (lighter gray) and two electrons (white). Actually, the electrons move about in a kind of orbital “cloud” rather than having fixed orbits as shown in the picture, and they can even be located right inside the nucleus.

Galacti’s size and distance in the diagram below points out the staggering amount of empty space in an atom. If you scaled a quark to measure one millimeter in diameter, a proton, in which there are only three miniscule quarks, would be 1,000 times larger, measuring one meter in diameter. Distances show the staggering amount of empty space in an atom.

Our intrepid, most miniscule quark would have to cross an astounding void of one hundred kilometers, or about the distance from Earth’s surface to where spaceflight begins, to reach any electrons that may be located on the outer layer of the atom.

But wait a second. Remember that our two protons in the helium atom are relatively heavy, and that both have positive electric charges.

Like the positively charged ends of two magnets, they repel each other. Imagine a helium atom nucleus with two light gray magnets instead of protons. How can this nucleus stick together instead of the protons pushing each other apart?

Neutrons have a neutral charge, so they’re unpredictable. What keeps them bonding to the mother nucleus? The electrons are little, white, negatively charged magnets that should cling to the positive mother nucleus instead of moving about the empty space of the atom.

Imagine our reporter shrinking down to the same size as the elementary particles and zipping back to the first nanosecond of the Big Bang. From this “point particle view,” he understands what is happening.

Inherent forces are set in motion between the elementary particles, conflicting but equilibrating forces that pull them together and tear them apart. We refer to these pull-push forces as energy.

Energy takes the form of both physical particles and nonphysical waves. A rather difficult concept to grasp, energy is both material and nonmaterial, tangible and intangible. Unimaginable, yet real, and proven by the reproducible two-slit experiment which reveals that energy is, at the same time, a wave and a particle.

This post is an excerpt from chapter 1.3-4 of Inventory of the Universe.

Since you read all the way to here… you liked it. Please use the Social Network links just below to share this information from The Explanation, On Atoms Protons Neutrons & Electrons. Our Amazing Universe