From Phytoplankton to Algae – How Humanity Affects Plants 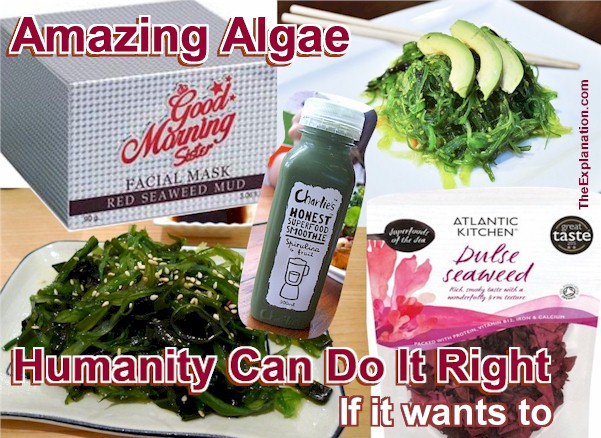 Flora, represented by phytoplankton and algae two of the most prevalent plants on Earth. What impact is humankind having on their well-being?

Amazing algae food and products. Seaweed is a useful resource, and humanity can do it right if it wants to.

“Each plant algae is itself a wondrous system processing air, water, and nutrients to feed all living things,” Galacti lectures. “Together, they form a greater and interconnected cycle that becomes the basis for the cycle of life. Air containing oxygen, water cleansed of contaminants, and food carrying vital nutrients all come from plants.”
(Audit of the Universe, chapter 5.1)

“You also rely on plants and algae for many of your accomplishments. Natural medicines, lumber, clothing, and rubber are just a few examples. Without this web of life support, the Earth would be as deadly to man as the coldest depths of space.”

He’s right. Flora forms a pivot point of life on earth, a choke point, a point of vulnerability. It is the intermediary between the air and man, and between the Land and us. It refreshes our oxygen supply and absorbs the nitrogen that makes animal life possible. Everything is interconnected; flora is another puzzle piece that is part of the entire picture. We’re auditing the whole framework of the Universe to see where humanity stands–is the glass of peace and prosperity getting fuller or emptier?

Is the system healthy? If not, are we working to repair it? If so, are our actions and decisions contributing to its continued health? Or are we pushing the system out of balance?

All Flora Small and Great

Flora on earth ranges from minute one-cell plant spores to the most significant plant with is a tentacular mushroom covering almost 1000 hectares or the equivalent of some 1700 football fields. Each plant possesses its challenges and value. Let’s take a closer look and see how they are faring.

Phytoplankton is a microscopic flora that inhabits every drop of the top 100 meters of every ocean on the planet. It is the largest field of plant life in the world, alone responsible for drawing as much CO2 out of the atmosphere as all land plants combined. The various species adapt to different climates and conditions, but the effects of human pollution and global climate change are reducing all of them.

Phytoplankton, microscopic plants in the top layers of our oceans, is the largest field of plant life in the world, alone responsible for drawing as much CO2 out of the atmosphere as all land plants combined Click To Tweet

The world’s population of phytoplankton has dropped by 40 percent in the past half-century, a fact with alarming implications both for the growing CO2 imbalance and for the ocean animals that rely on phytoplankton as their primary food source. That list includes sea stars, shrimp, snails, many species of fish, and even whales.

Humanity has responded to this discovery with funding, research, and experimentation into what is causing the phytoplankton to die-off and what we can do about it. We understand the importance of this microflora to the ecological balance of the earth. As of this writing, restoration projects have begun testing hypotheses–but we are just at the beginning of the journey toward a solution.

Algae are slightly larger, but still tiny, flora that can warn observers about the overall health of water ecosystems. Under healthy conditions, algae provide oxygen and food for aquatic animals while growing in a controlled fashion.

Unhealthy conditions cause algae to “bloom” in a massive slick that destroys the entire local aquatic ecosystem. The slick blocks sunlight from reaching beneficial underwater plants, which can then no longer produce enough oxygen for local fish.

Even in healthy quantities, algae can become a hazard when interacting with human behavior. Algae eat and concentrate whatever substances are in the water. If they grow in an area that is taking in a safe amount of sulfuric acid from a nearby factory—say 1 part per million—they will concentrate that dangerous toxin within their mass. The algae can then burn or poison swimmers, pets, and livestock that swim in it. When the algae die, the dangerously concentrated contaminant sinks to the bottom of the lake to poison and kill the plants growing there.

Algae eat and concentrate whatever substances are in the water--like sulphuric acid. It can then burn or poison swimmers as well as killing plants and aquatic species that eat it Click To Tweet

Algae blooms happen almost exclusively when we humans impact an area via careless importation or nutrient pollution. The inadvertent introduction occurs when a species of algae is carried into a new waterway (for example, on the bottom of a boat). Each waterway has its own population of plants and animals, which has interacted over centuries into a working balance. When a new species of algae enters that balanced system, it can thrive due to a higher nutrient content than it is accustomed to, or from an absence of natural predators. The newly arrived algae bloom, often supplanting or destroying the original population of the waterway.

Nutrient pollution is when runoff from artificial fertilizer used in nearby farms contaminates the water. We discussed the “mixed blessing” of fertilizer in the previous chapter about land, but its effects on the water only illustrate how interconnected the whole system of the world is.

Algae can also be helpful, and demonstrate the innovative ways we can interact with flora to improve the world and our lives – even to help balance some of the most destructive consequences of our often short-sighted decisions.

Algae have a short life cycle, which lets scientists experiment with genetic engineering and selective breeding faster than with many other species. We have used this speedy development to breed algae that eat waste, even hazardous waste, to clean up our mistakes. Microcloeus steenstrupii is just one example of algae grown to eat oil and heavy metals contaminating water and has been used in spill cleanup worldwide. Another alga—c. moniliferum—can separate strontium from nuclear accidents and trap it where it does no further harm.

Recently, French designer Pierre Calleja has developed a lamp using bioluminescent algae as its light source, lighting urban areas as well as an electric lamp without requiring electricity. Even better, each algae lamp can absorb one ton of atmospheric carbon per year. Several other teams have developed algae that can be used as biodiesels to reduce our dependency on fossil fuels.

This blog post is an excerpt from chapter 5.1 of Audit of the Universe.

Since you read all the way to here… you liked it. Please use the Social Network links just below to share this information from The Explanation, From Phytoplankton to Algae – How Humanity Affects Plants