Dry Land, Seas, and Flora. Why this Combination on Day 3 of Creation? 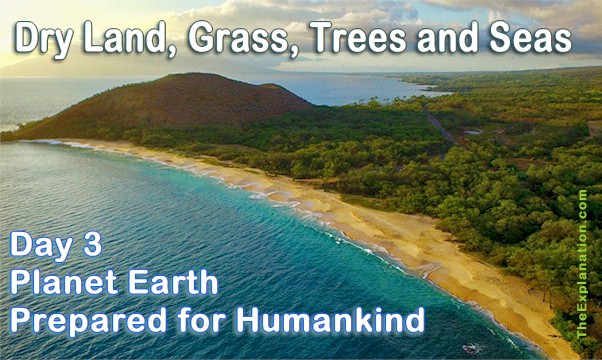 Dry land covered with grass, herbs, and trees, as well as the seas, appear. Day 3 of Creation and Earth is more and more readied to be the home for humans.

Dry land, grass, trees, seas. Day 3 of Creation and our Planet Earth is looking more and more like home for humankind.

Dry land, seas, shorelines, beaches, grass, trees, fruit. It sounds like paradise. That’s what God created on Day 3 of Creation. A lush, welcoming environment that includes every conceivable need for humankind. Ever wondered why we have such richness on Earth? Our environment, with its self-sustainability, viability, and practicality, defy superlatives.
(Origin of the Universe, chapter 8.7)

If we take the time to analyze it, each very succinct daily description covers vast concepts. Gen. 1:2 told us water covered the Earth, was it salty or fresh? Who knows, but in the 21st century, we have both salt seas (96.5% of water) and freshwater (3.5%) tables, each with their separate and specific environments. What lives in the sea cannot live in freshwater and vice versa; save a few species which have unique systems to handle salt and fresh environs.

Not only is there no consensus as to where the billions of bathtubs of water came from, but no one ever broaches the question of how and why such opposite systems co-habit in total symbioses. As discussed in Inventory of the Universe, the seas play an essential role in climate control, reduce or increase their size by any significant percentage, and the climatology is upset, not allowing for life on our planet.

We are going to see they play another role. Oceans are natural geographic boundaries.

9 And God said, Let the waters under the heaven be gathered together unto one place, and let the dry (H3004) land appear: and it was so.

10 And God called the dry land Earth; and the gathering together of the waters called he Seas: and God saw that it was good.

11 And God said, Let the earth bring forth grass, the herb yielding seed, and the fruit tree yielding fruit after his kind, whose seed is in itself, upon the earth: and it was so.

12 And the earth brought forth grass, and herb yielding seed after his kind, and the tree yielding fruit, whose seed was in itself, after his kind: and God saw that it was good.

13 And the evening and the morning were the third day.

The amassing and concentration of the water caused dry land to appear. In English, the King James Version uses two words to express what appeared: dry and land two different concepts. Hebrew uses just one word; where is the emphasis, on the dry or the land?

יָבֵשׁ yâbêsh yaw-bashe’; a primitive root; to be ashamed, confused or disappointed; also (as failing) to dry up (as water) or wither (as herbage):

Yabesh applied to rocks, stones, gravel, pebbles, sand, silt, clay, and dust is merely referring to their fleeting, temporary nature. We look at a mountain like Everest, and if anything reminds us of solidity and permanence, that would be it. But precise measurements show that mountains can lose a few centimeters, or more, each year due to the wearing down of erosion.

In this verse, land is referred to as dry rather than wet because God didn’t want humanity walking in mud. Dry land also absorbs water; this is a fundamental need for placing humankind on this planet. Dry also tells us that the dry land is temporary and subject to withering. Man is in an environment that is drying up and fading away.

Verse 10, “And God called the dry land Earth…” would be better rendered by, “And God called the dry, land (or earth).” There’s only one Hebrew word here, and I remind you there are no capital letters in Hebrew, Earth is earth, referring to dirt, not our planet. Land is from H776 אֶרֶץ ʼerets eh’-rets; from an unused root probably meaning to be firm; the earth (at large, or partitively a land): KJV – ⨯ common, country, earth, field, ground, land, ⨯ natins, way, + wilderness, world. (In Strong’s words in the KJV list with ‘⨯‘ and ‘+’ are translations from Revised Standard Version and American SV).

What I’m writing here should not be a surprise to you; the laws of Thermodynamics say the same thing. Everything inanimate tends towards a state of decay. The description of dry land as rocks was somewhat limited. It also includes minerals like boron, chlorine, cobalt, copper, iron, manganese, magnesium, molybdenum, sulfur, zinc as well as all the radioactive substances like uranium and plutonium which are distinct illustrations of this decay.

As I pointed out in Inventory of the Universe, dry land with its strata encloses a vast array of mineral riches from sandstone to marble from Erbium, essential for optical fibers, to Lithium fundamental for most widespread hybrid car batteries and treating manic-depressive troubles today. Both precious and scarce, certainly not inexhaustible. Think about the fact that all these minerals and trace minerals serve the sustenance of humanity. They are necessary for both industry and health. The Hebrew word land is a useful reminder to literally come down to earth, the firmness under our feet. The ideal habitat for humankind. But it doesn’t stop there.

Day 3 is a transitional day. It reveals the relationship of the inanimate dry land to the animate flora, bonding them inexorably together. This day does a 180° flip-flop and propels us into a ground-breaking realm.

Day 3 of Creation is a transitional day in that it shows the relationship of the inanimate dry land to the animate flora and bonds them inexorably together. Click To Tweet

Earth’s landscape is not limited to the stark and sterile: to rocks, clay and minerals we must add earth, soil, topsoil, loam the fertility that permits grass, flowers, crops, and trees.

If I were to compartmentalize the days of creation, I would’ve probably completed the INanimate land and followed with the animate the next day, but this is not the case during Creation. I can only surmise why they come together.

Juxtaposing dry land and green grass makes me think of abiogenesis and spontaneous generation. That larvae spontaneously appeared on rotten meat or microbes on broth proved life generated itself from the inanimate, so was the belief in the late 18th century. Experiments revealed that living organisms in the air caused this, and when the test removed air from the equation, no life appeared. Pasteur finally debunked this, proposing that all life is from life, the theory of biogenesis. Not one blade of grass, one seed of corn, one fruit has ever come from INanimate minerals, chemicals, or rocks.

Pasteur debunked spontaneous generation with the theory of biogenesis-life comes only from life, Not one blade of grass, one fruit has ever come from INanimate minerals, chemicals or rocks. Click To Tweet

The minerals did not generate the flora. God created it, and verse 11 indicates, “the fruit tree yielded fruit and had seed within itself.” Finally, an answer to the question, which came first, the plant or the seed! Yes, I realize we’ve jumped into some deep water, and maybe I’ve lost some readers here, but we need faith to believe this. On the other hand, no scientist has ever shown how minerals generate life, so you need faith for that one too!

This association of dry land and land cover also bears heavily on basic principles dealing with fertility, fallowness, and land Sabbath. Land rest does not mean bare idle ground; we discussed the vital role of earthworms, which includes their need for organic intake; this takes the form of nitrogen-rich leguminous greenery plowed back into the earth. How can we expect the soil to feed us if we never feed the soil? This whole cycle, depicted by the coupling of dry land and living greenery, gives animals and ultimately humankind the real natural nutrition it should be getting, which leads to healthier bodies and minds all around.

This interwoven couple, inanimate dry land and animate plants, animals, and humans, reveals inter-dependency. We, humans, come directly from it as we shall see, live on it in the all-encompassing sense that we draw our livelihoods from it. Everything we eat, manufacture, play with and count on comes from this limited commodity of dry land, its precious contents, and cover, which we tend to treat like dirt. Humanity has forgotten its roots, of which Genesis 1 should remind us.

This blog post is an excerpt from chapter 8.7 of the book Origin of the Universe.

Since you read all the way to here… you liked it. Please use the Social Network links just below to share this information from The Explanation, Dry Land, Seas, and Flora. Why this Combination on Day 3 of Creation?