God or gods. The Foundation of Religion 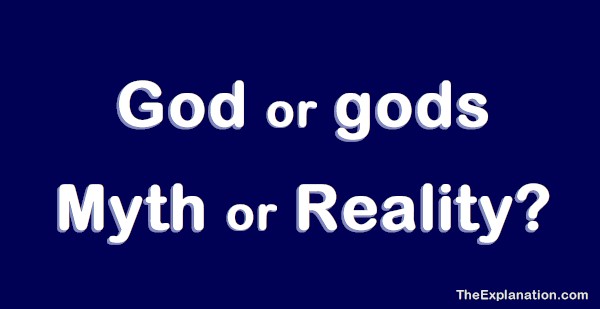 God or gods. Without them, without the spiritual religion has no leg to stand on. Either there is or there isn’t. Can you prove it?

God or gods. Is it all myth or where’s the reality?

God is at the heart of the human reasoning process. No God, no religion. No spiritual, no religion. This is one of the reasons questions about the existence and reality of God are so controversial.
(Audit of Humankind, chapter 5.14)

Where did the original idea of G/god, spiritual, worship come from? Religious practices go back much further than most people realize. According to archaeologists, animal worship can be traced to 40-70,000 years ago. Bear worship was quite widespread and is present in Korean mythology as in Europe.

The biggest cult, however, was goddess cult. Adoration of the feminine mother. Numerous

figurines from 20,000 BCE and earlier have been unearthed. My intention is not to go into detail here. Please read the reference links. These are well-researched articles with valuable information. Going back 20 centuries before Christ and talking about mother worship may leave you in unbelief. But, religion has been around for a long long time. This mother worship is related to goddesses of fertility and also mother-child worship.

Here is the introduction to Antecedents of the Goddess Cult

The figure of the goddess can be traced through time and is often found associated with snakes, bulls and birds. The idea of the goddess as mother can be found with the prehistoric ancestors of modern humans. Some 30,000 years ago early religion, which was a feature of human evolution, is a necessary proof that supports the suspicion that early Homo sapiens held certain spiritual beliefs.

Note that The Explanation doesn’t agree that prehistoric beings were ancestors of modern humans, nor that their spirituality is a feature of evolution. I include this quote to indicate clearly that prehistoric beings had spiritual leanings towards practices that still prevalent today with modern humans. The question is, what is the origin of these beliefs? How have they been transmitted over so many generations and such vast territories? This will be answered in Fate of Humankind after more background has been given.

We are looking into G/god and related practices, under the heading: How humans reason, because as old as mother-child worship is, it is still prevalent in certain religions today. Here’s an image of Notre-Dame, the Rose Virgin with child. There are hundreds of such representations in Churches around the world. Where does this belief come from? The Bible or all the way back to prehistoric times?

We must also ask the question as to whether prehistoric individuals could worship G/gods 20-40,000 years ago considering what we know about their brain capacity. How can this be? It merits an explanation which will be forthcoming.

If you want to understand the relationship of myths and religion both with regard to beliefs and practices, then there is one author you should read. Mircea Eliade. For 50 years he was a professor of the History of Religion and wrote many works on the subject. He is easy to read and goes in-depth about beliefs and practices worldwide. As he puts it, he wanted to “demonstrate the fundamental unity of religious phenomena and the inexhaustible renewal of their expression.”

To put it in other terms, the basis of religious practice and belief has an incredible unity but has been adapted nationally, politically and culturally down through the ages. When I refer to ages, it is all through the approximate 6000 years of human history and, as we’re seeing, going way back into prehistoric times.

Here’s Eliade’s assessment of myths and their reality.

It would be hard to find a definition of myth that would be acceptable to all scholars and at the same time intelligible to nonspecialists. Then, too, is it even possible to find one definition that will cover all the types and functions of myths in all traditional and archaic societies? Myth is an extremely complex cultural reality, which can be approached and interpreted from various and complementary viewpoints.

Speaking for myself, the definition that seems least inadequate because most embracing is this: Myth narrates a sacred history; it relates an event that took place in primordial Time, the fabled time of the “beginnings.” In other words, myths tell how, through the deeds of Supernatural Beings, a reality came into existence, be it the whole of reality, the Cosmos, or only a fragment of reality, an island, a species of plant, a particular kind of human behavior, an institution.

Myth, then, is always an account of a “creation”; it relates how something was produced, began to be. Myths tell only of that which really happened, which manifested itself completely. The actors in myths are Supernatural Beings. They are primarily by what they did in the transcendent times of the “beginnings.” Hence myths disclose their creative activity and reveal the sacredness (or simply the “supernaturalness”) of their works. In short, myths describe the various and sometimes dramatic breakthroughs of the sacred (or the “supernatural”) into the World.

It is this sudden breakthrough of the sacred that really establishes the World and makes it what it is today. It is as a result of the intervention of Supernatural Beings that man himself is what he is today, a mortal, sexed, and cultural being.

Another point that characterizes the earliest religions, long before Abraham and his ancestors like Moses. The multiplicity of gods as opposed to One God. We find this in the pantheon of the gods of Egypt,

The three major Abrahamic religions and their thousands of derivatives have divergent views of God. In fact, their perspectives begin and end with very opposing outlooks. We go all the way from the Trinity, through Binitarian and Unity. Three, Two, One, Three in One (Christianity). Two in One (a few derivatives of Christianity). Only One (Judaism and Islam). The Trinity, Father, Son and Holy Spirit, three Gods in One is, by far, the most widespread belief of the nature of God.

The Trinity warrants a chapter, and more, just for itself. Like the origin of gods and goddesses, the various beliefs and myths so goes the Trinity. The Trinity is one of the oldest religious beliefs far preceding the Bible narrative.

Scientists, scholars, and experts like Dawkins, Yuval Harari, Steven Pinker, Sam Harris erect their entire reasoning process on the absence of God, gods or anything spiritual. If this one piece in their worldview puzzle is wrong, their whole reasoning process topples into ruin.

Clergy and experts like the Pope, TV Evangelists, all religions erect their entire reasoning process on the presence of God, gods or something spiritual. If this one piece in their worldview puzzle is wrong their whole reasoning process topples into ruin.

You cannot prove, in a scientific or philosophical sense, the existence or non-existence of God. The approach of The Explanation is simply to reveal evidence to demonstrate coherent completeness. Such an endeavor is not one article, it involves laying all the pieces on the table and then assembling them correctly. Can you assemble a coherent puzzle without the God and spiritual pieces?

This blog post is an excerpt from chapter 5.14 of the book Audit of Humankind.

Since you read all the way to here… you liked it. Please use the Social Network links just below to share this information from The Explanation, God or gods. The Foundation of Religion