Religious Belief is a Mighty Motor of Human Reasoning 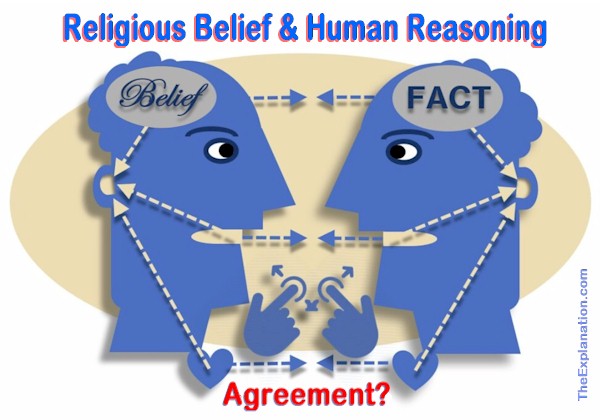 Belief, especially religious belief is a very powerful human essence. it is widespread and an integral part of human reasoning.

Belief and human reasoning. Why can’t belief and facts be in agreement?

Belief in the supernatural is far-and-away the biggest influence on the human mind and human reasoning. Why don’t God, religions, facts, and reality concord? Is it all myth, or is the problem with how humankind reasons?
(Audit of Humankind, chapter 5.15)

In 2019, the Age of Science, 84% of the world population are believers in some form of religion. From their own particular view of God or god through the supernatural on down to astrology and ghosts. Why so much belief? Where does belief come from? What should we believe?

In certain circles, belief is enlightenment. But, there’s enlightenment and enlightenment! The pendulum swings. What was enlightenment in the 1600s is not the enlightenment of the 21st century. Then there was belief in the rise of science with discoveries by Copernicus, Galileo, Kepler Newton… Before that, religion had imposed its rule of belief on people. Now they began to speak up and think for themselves. The rational shifted poles to human observation and reasoning.

This enlightenment proposed learning, schools, and university. Books became cheaper and more abundant with Gutenberg’s printing press. This excellent article, What was Enlightenment adds “Dare to know! Have the courage to use your own understanding” is, therefore, the motto of the enlightenment. The three key ideas were reason, knowledge, and freedom.

Today enlightenment is akin to spirituality and riddance of suffering. It is a term borrowed from Eastern esoteric practices that refers to one’s inner spiritual calm. The number of teachers believers is growing in the West. The key practice revolves around forms of meditation. These beliefs match those of spiritual philosophy that I’ve already developed. Beliefs overlap.

Many believe that birthright promises were passed down from Abraham via Ishmael his first son with Hagar. While others believe those promises including Messiahship come through Isaac, his son with Sarah. These two opposing beliefs have given rise to Islam and Judaism and a rift in the Middle East that isn’t anywhere near being solved.

Christianity is at loggerheads with both Judaism and Islam because Christians claim Jesus as the Son of God, their Messiah. For Judaism, he is at most a human being and Islam presents him as a prophet but not more. Then there’s the question of who is responsible for Christ’s death, Romans, Jews…? These are just a few major beliefs.

We’re focusing on the Abrahamic faiths and their beliefs. Here are 3 lists of fundamental beliefs. The do’s and don’ts, if you will, of how to be a good Moslem, Jew or Christian. As you read and compare them, there are similarities and differences, ask yourself, what’s the origin of these lists? Where do these concepts come from? Can religion be presented this way?

Islam and the Six Articles of Faith

Judaism and Maimonides’ 13 Principles of Faith

These like so many other beliefs have been criticized and modified by other Jewish scholars. Some think they’re incomplete. Of course, it’s impossible to lay out a religion in 13 sentences but this surveys the main keys and gives you a point of comparison.

Christianity and the Ecumenical version of the Apostle’s Creed

As you can see, at the above link, there are various versions of this Creed. Indeed, there are dozens of versions of Christian Creeds and Confessions of Faith. There are country and Church specific articles depending on the emphasis each group puts on their particular beliefs.

I believe in God, the Father almighty,
creator of heaven and earth.
I believe in Jesus Christ, God’s only Son, our Lord,
who was conceived by the Holy Spirit,
born of the Virgin Mary,
suffered under Pontius Pilate,
was crucified, died, and was buried;
he descended to the dead.
On the third day he rose again;
he ascended into heaven,
he is seated at the right hand of the Father,
and he will come to judge the living and the dead.
I believe in the Holy Spirit,
the holy catholic Church,
the communion of saints,
the forgiveness of sins,
the resurrection of the body,
and life everlasting. Amen.

Human acts, human bickering, human arguments, human hatred, human fighting, human wars have all been fought in the name of these three groups of beliefs and in the name of the God(s) and Prophet(s) behind these beliefs. The human reasoning process based on religious beliefs will never cease to amaze as to its complexity. These beliefs are so strongly embedded in so many human beings they are ready to die for their beliefs rather than renounce them.

This blog post is an excerpt from chapter 5.15 of the book Audit of Humankind

Since you read all the way to here… you liked it. Please use the Social Network links just below to share this information from The Explanation, Religious Belief is a Mighty Motor of Human Reasoning