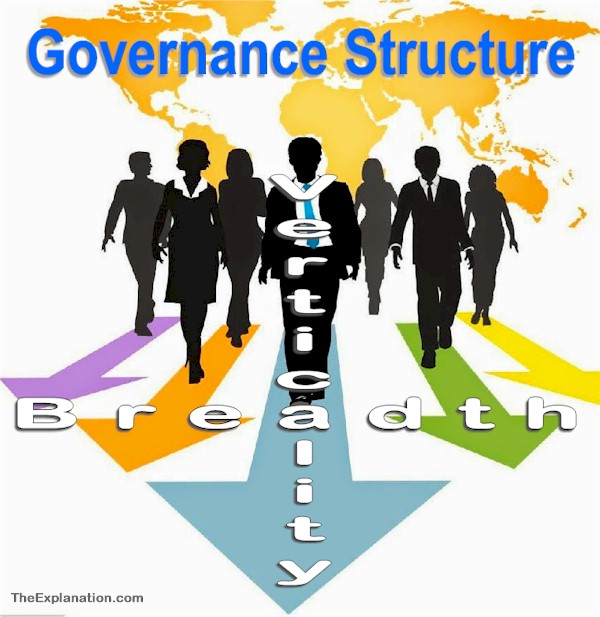 Governance structure occupies a prime position in rulership. How functions and responsibilities are distributed is a game maker or game breaker.

Governance structure considers both the hierarchical verticality and interconnecting breadth

Governance structure refers to how the whole is broken down into manageable parts. How each part can act alone and at the same time in conjunction with all the other parts. Pesticides might be associated with agriculture but they affect industry and health. The governance structure must address this issue globally, or else someone somewhere is going to come up short.
(Audit of Humankind, 4.2)

We talked about the plethoric forms of rulership. Let’s suppose we settle on one of these types, be it democracy or autocracy, simply chosen as an example. Then, that rulership has to decide how it’s going to organize the task of governing the entity, be it an organization, a company, or a country. Does in need vice-presidents, ministers, managers, assistant managers, coordinators? It might have an autocratic leader, but that person can’t do everything themselves. This is the verticality of government and the importance of governance structure.

Next, the leadership has to consider all the aspects of governing a group of people. How the responsibilities of each manager are distributed (agriculture, education, science…). Their territory of authority is the breadth of government. The interplay between the managers as the decisions overlap and affect other departments is a major concern is bringing peace and prosperity to the entirety of those governed.

The goal of The Explanation is to show how to bring peace and prosperity to everyone, every human being on Earth. That means not taking sides with any single influential group (employers, high society) to the detriment of some other group (employees, lower classes). There will always be employers and employees, a wealthier, and a poorer group in society. But that is not in opposition to all groups in a society enjoying peace and prosperity.

As I write the COP 24 climate conference is adjourning in Katowice, Poland. By 2020, the world wants to keep the temperatures to a maximum 2-degree increase over pre-industrial levels. We have to reduce pollution. Here’s the national governance structure Poland faces. It heats mainly with coal, a plentiful resource with an industry that employs 100,000 people. On the opposite side of the coin, 47,000 lives are lost each year owing to the coal-caused smog from heating. Government breadth is not taking into consideration all the factors on this issue.

Here’s what Fenger and Bekkers have to say about governance structure in Creating Connective Capacities in Public Governance: Challenges and Contributions.

Governing contemporary societies has become a challenging task, almost on the verge of the impossible. Social, cultural and religious beterogeneity has increased within societies. As a consequence, the demands and preferences from citizens and their representative organizations have exploded. Moreover, as processes of modernization inevitable lead to specialization and fragmentation, the number of organizations involved in governing modern societies has increased remarkably as well.

Simultaneously, the proliferation of new information and communication technologies has lead to the redundancy of the constraints of time, space, matter and energy. As a consequence, systems and subsystems are becoming increasingly interdependent and interconnected.

Verticality has increased via the prolific number of organizations and people involved. At COP 24, some 200 countries, minus the USA, and a threat that Brazil (8th biggest polluter in the world) will also leave the Paris Agreement. The UN website says this:

The basics: UNFCCC, UNEP, WMO, IPCC, COP 24, Kyoto Protocol, Paris Agreement… can someone please make sense of all this?

This is the complexity of the verticality of the governance structure. The answer to the above inquiry goes on to add.

These acronyms and place names all represent international tools and terms that, under the leadership of the UN, were created to help advance climate action globally. They all play a specific and different role in focussing us all on achieving environmental sustainability.

The governance structure just to handle climate control is of a planetary tentacular type. It goes from the biggest > smallest, the most critical > least critical, the highest priority > lowest priority, the most authority > least authority, the first resort > last resort. Yes, it’s a major worldwide dilemma that we’re in and the overstuffed hierarchical charts are a witness to the complexity.

Some of these are issues were considered minor just a few short years ago, Now, they’re coming to a head. Deviance, gender, internet, networks, social psychology, stratification, and maybe even technology as it increasingly impacts our lives.

Breadth has increased: There are more issues affecting more and more people. All these pieces are complementary components, parts of the whole. They are parts of the peace and prosperity puzzle that face governance structure on a national and international level with an unprecedented challenge.

In France, we’re having a debate about spanking. What’s the definition? In the mouths of those opposed to spanking, it is violence against children. The solution is talking out the problematic situation. Ever tried talking to a 2-year-old throwing a tantrum? What are the underlying principles here? spanking is just one isolated method involved in childrearing. Can you use punishment? How far can punishment go?

Think about some rebellious kids from the inner cities or the rich who think they are free to do whatever they please. Both come from totally opposite backgrounds and end up with the same antagonism. How did they get that way? Is there a common cause? If so, what is it and what is the cure? Is punishment or lack of it part of the cause? What type of punishment? What about now? If they’re adolescents, they need special supervision to learn their place in life. Maybe they need some stiff-handling to knock them off their lofty pedestal.

From a rulership breadth point-of-view. If the parents don’t do the necessary disciplining to bring their children up correctly, the result lands in society’s lap. This affects teachers, group-leaders, employers, colleagues,  eventually police, and maybe prisons.

As I write, the gilets-jaunes movement continues in France. Hundreds were arrested last Saturday and Sunday for ripping up sections of Paris, millions of Euros of damage to city furnishings, tags, and destruction all over the Arc de Triomphe. Police, fireman, shop-owners, tourists, and peaceful protestors have been caught-in-the-middle. Prime Minister Edouard Philippe met with Unions, heads of the political parties, and members of his government. He’s trying to take the breadth of those involved into consideration.

He just announced measures of appeasement by postponing taxes on gasoline and heating costs. By doing so, he sliced 2 billion Euros off the national budget, which will affect the breadth to one degree or another. It’s likely that even these measures will not be sufficient to reduce the present state of anger across the nation.

Hernando de Soto Polar, a Peruvian economist believes that the economic ingredients to beat poverty include: State law, liberty to be an entrepreneur, respect for property rights, independence of justice, and democratic representation leadership. See the breadth of factors, governmental, and other organizations for this to become reality. The breadth of governance structure takes resources, communication, and coordination.

Now, of course, there’s an interpretation of all these ingredients. But imagine a state or country that had leadership, both vertically and in its breadth, that really represented the ideals and needs of the ground-level people, the small people. Along with that, there was a system of independent justice where verdicts really reflected the reality.

Judges and jurists could go to the crux of a matter and, after a properly balanced investigation, find out what really happened. Criminals and victims really received what was due to them. There was real equality of treatment before a judge. Where there were rights and obligations with regard to property and ownership. That’s the breadth of real justice. What a difference it could make in the economic lives of citizens.

These are not the only conditions required but they do represent a good start.

Today we have to ask the question where do the proper vertical and breadth conditions for governance structure exist? Where could such conditions exist? How could we bring about the existence of such conditions?

Rulership, through proper governance structure, is not a fractionalized, piecemeal decision-making endeavor. By definition, it needs to be a global, integrated woven fine tapestry. Governance is not cacophony. Governance structure takes knowledge, experience, wisdom. There has to be an overall plan around some fundamental ideas. The implementation will necessitate decisions, but those decisions must all support the same thrust towards peace and prosperity. Is humankind on the way to that goal?

This blog post is an excerpt from chapter 4.2 of the book Audit of Humankind.

Since you read all the way to here… you liked it. Please use the Social Network links just below to share this information from The Explanation, Governance Structure, Important Role in Rulership