Government for the People is Also Concern for the Poor 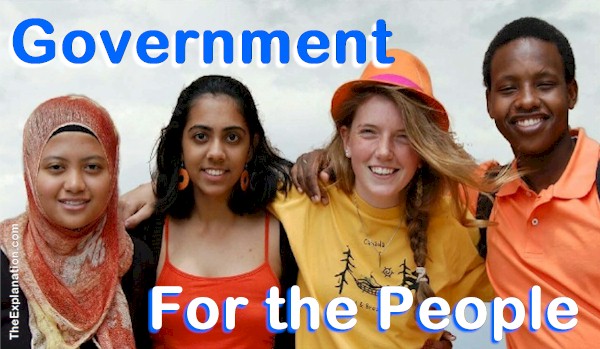 Government for the people means those who rule consider the well-being of all citizens and inhabitants they oversee in their territory.

Government for the People. Peace and prosperity for all, that is the goal.

Government for the people involves focusing attention on the welfare of all those being managed by you. Whether it’s a family, school, company, neighborhood, city, or country. Whether you administer a prince or a pauper, all should have conditions to be able to lead peaceful and prosperous lives.
(Audit of Humankind, chapter 4.3)

This post is written the day after French President Macron gave a 13-minute speech watched by 21 million French people in hopes of calming down or putting an end to the gilets-jaunes crisis. Just last weekend, in the fourth one straight, over 1100 people were arrested for acts of disobedience and worse. Damage to public property and in the private sector is soaring. The TV and social media images impact France’s reputation worldwide and closed commerces at this time of year spell catastrophe for small business and, at a minimum, unemployment for many.

The President and government are scrambling, belatedly to get a handle on this unruly situation. Quickly taken polls show a more or less 50/50 positive/negative reaction to Macron’s speech. Worst of all, hardcore gilets-jaunes are calling for more disturbances next weekend.

Nobody knows what will be the outcome of this breakdown in government. What is for sure is that a majority do not feel that the rule of this country is government FOR the people. And that sentiment is not limited to France by any means. Many if not all countries around the globe, no matter what type and structure of government are in play, feel exactly the same way.

People feel left out. People can’t make ends meet. People feel a shortfall when it comes to personal, family, and national peace and prosperity. The Explanation shows you why this is the case and how it is going to be solved. This solution will not be an overnight fix. It will not take place in a way most people feel it will. That’s another story that is told in the books Origin of the Universe and Origin of Humankind (in writing).

The first 9 chapters of Audit were an elaboration of how humankind is treating the planet and its occupants, the flora, the fauna, and us humans. Chapter 10 focused on what singularizes humans with how we function psychologically in chapter 11. How humans socialize followed, and this chapter 13 is devoted to how humans rule. How we govern the various fields we need to conduct our lives and fulfill our needs as peacefully and prosperously as possible.

We’ve looked at the various types of government for the people, from democracy to autocracy. There’s the complex encompassing hierarchal verticality and breadth to cover the gamut of human activities and endeavors.

To help answer the question, how can we bring peace and prosperity to all of humankind, let’s pursue the personal and national quests to do just that. Each nation has a government for the people to take care of their needs.

With proper government for the people, peace and prosperity are the goals. Unfortunately, some governments and some authorities are corrupt and greedy. Their goal is to line their own pockets and government can be detrimental to their citizens, regardless of whether its a democracy or an autocracy.

There follows a list of ministries, that typify most national governments. However, I’ve elaborated on the list with 2 keys in mind, peace, and prosperity. Can we have a government for the people that can be thus purposed? This list and its organization are certainly not definitive. It doesn’t include all the nooks-and-crannies of government and the assembly of the various branches can be improved. That’s the verticality and breadth of the organigram we discussed. It does give us a glimpse of government for the people.

The principal focus is that it’s divided into two complementary branches, peace and prosperity. On a personal and national level, adding another 2 directions for a total of four branches. As is to be expected, some subjects overlap, and that is where cooperation and integration come into play. The left hand cannot act alone with the right hand knowing what it’s doing.

We’re going to take a look at each sector and ask one simple question. Is government for the people heading towards the goal of peace and prosperity for its citizens on an individual and collective level?

France is far from being the lone country wracked by unrest and dissidence. Here’s a partial list of dozens of international terrorist groups. More, hundreds of just active rebel groups in about 50 countries. Pacific, non-violence protests, from destructive (try convincing them that there might be a contradiction between non-violence and destruction) to non-destructive, by consumers, tenants, managers… Even peace movements can be found all over the planet. Like governors of government for the people, these groups take on all shapes, sizes, and colors. I’m really not expecting you to read all of that. Just a cursory skimming might be useful. Understand this, it’s plethoric and pathetic.

Our society has made incredible progress. We have technology and power at our fingertips like no other period in human history. What have humanity’s achievements really achieved? Is each individual planetarian a beneficiary of these achievements? Maybe you’re thinking it’s a mixed bag. Well, is the bag getting fuller or emptier?

This blog post is an excerpt from chapter 4.3 of the book Audit of Humankind.

Since you read all the way to here… you liked it. Please use the Social Network links just below to share this information from The Explanation, Government for the People is Also Concern for the Poor