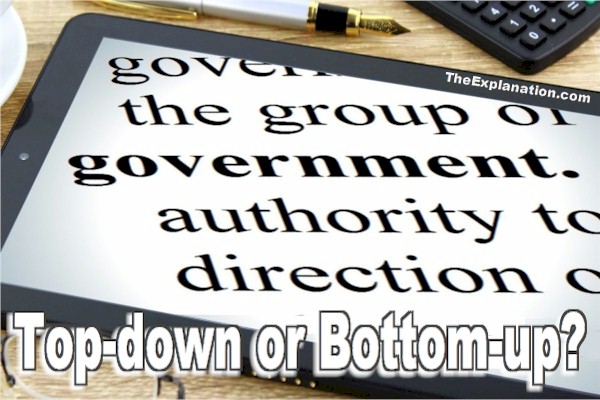 Government gives us 2 opposing choices. Autocracy or democracy. Top down or bottom up. Everything else is a combination of these extremes.

Government. We have two choices, bottom-up or top-down. How can we exercise rulership with justice?

I’m British, living in France with great interest in the United States of America. All three governments are in dire straits as I write this post. Britain is in total uncertainty about Brexit. France is in the gilets-jaunes torment. The USA is in the throes of a government shutdown as President Trump and Congress face-off. Government is as much a personal issue as a national matter.

Elsewhere in the world governments are in a more or less state of contestation. Since 2010 there have been more than forty attempted coups d’etat with more or less success. This is a direct attempt to overthrow a ruling government. Here’s a list of some 140 controversial elections which probably involved vote or voter manipulation by one of the parties involved. You might think that only the least developed countries, also known as the Global South, would be on the list. Surprise, the USA, and Britain are present, but not France.

France, however, is in the midst of a severe governmental crisis. Some are comparing to May ’68. However, there are major differences. The key problem today is called fracture sociale, the dividing in two of society. The haves and the have-nots. There is a deep feeling of social injustice. In a country where the national motto is liberty, equality, fraternity, many feel there’s a lot of all three missing. There’s a general mood that executive government is not in touch with the general population.

The rift between upper and lower classes is not news. It is estimated that about 8 of the richest people are worth as much as 50% of the poorest people in the world. The chasm between the rich and the poor is insurmountable under present circumstances.

In France, this is acerbated by the feeling that the present so-called leftist government is not only more rightist, but it is giving advantages to the rich at the expense of the poor. There’s a perception that the higher echelons of government are divorced from what’s taking place at street level. It’s similar to what’s happening in a number of Western countries. There is employment, but jobs have become more precarious and less well paid. Or, at least, the cost-of-living has increased at a faster pace than salaries. Pocketbooks are being stretched and people are not able to make ends meet.

Month’s end looms with no food on the table and lines at the Resto du Coeur, France’s version of the soup line lengthen. People, even families, that hold down 2 jobs, people who are working, still can’t live decently off the wages they are working hard to earn.

This has resulted in the creation of The Grand National Debate. A consultation that will take place anywhere and everywhere in France. Citizens, associations, and mayors can launch their own meeting, ask their own questions, practically no subject is taboo. The outcome and recommendations of these reunions will be passed to higher echelons to be taken into consideration for future decision-making directed at solving the social fracture.

Along this line, President Macron has completed 2 of the proposed 10 meetings with thousands of mayors around the country. There are over 35000 mayors in France with more than half overseeing villages of less than 500 constituents. The mayor is the elected official that is the closest to the population. Both the consultations with the mayors and the national debate are a way to revive communication between the bottom-up and the top-down.

The Explanation’s goal is to reveal how the world can reach peace and prosperity for both the top and especially the bottom. Present government and economic policies are not only not reaching that goal but, in fact, the gap is getting larger between the rich and poor classes.

Can the poor, the average person, the general public have the wisdom to know how to direct a country? Can they have the vision to discuss long-term decisions? We’ve looked at the Ministry of Interior Works, Economics, Foreign Affairs, Defense. This segment of society does not have the wherewithal to be able to advise and decide on such matters. Nobody is referring to their knowledge and education or even their wisdom These are highly specialized ideas that need preparation and experience to assume such responsibilities.

Bottom-up rule is an illusion. The gilets-jaunes movement in France, with all their disruptive activity, their ability to mobilize manifestations, and the sympathy they’ve drawn has been incapable of designating leaders to negotiate or even represent them on TV interviews. In fact, anyone who has come forward has had their family or themselves threatened, even their lives. It’s an uncanny situation.

Top-down rule has been the norm for most of history. Generally strong people, mainly men, who have forced their way to the helm. Oftentimes leaving a trail of literal or figurative cadavers in their wake. Many have and still do rule by brute force, either eliminating the opposition or overseeing a powerful army or secret police who is at their beck and call for any and all dirty work.

A monarchy, king or queen, is a form of top-down rule. It depends on the power of the monarch. In times past, they were the sole power, nowadays, as with the example of the British Royal line, they have no power at all. Furthermore, this type of rule, when passed on the next-of-kin, is subject to the nature of the heir which can be detrimental or advantageous for the country.

Democracy is a compromise in that the bottom elects the top. But, as we’re witnessing, the bottom fringe can be very oriented in its approach to rulership. A number of democratic countries have pushed more extreme leaders to the top. Namely the USA, Turkey, and Hungary. And many dubious democracies are on the verge of instability.

There is a Fragile State Index (renamed from Failed State Index). About fifty percent of the nations in the United Nations fall into the categories warning, alert, and the red zone. Much of Central and South America, Practically the entirety of Africa and the Middle East as well as swaths of Asia. Remarkably issues of fragility are touching the world’s most developed and richest countries in 2019. The USA and UK have both been cited in this category.

In France, as the Great Debate gets underway, President Macron sent out a letter to all citizens in which he proposed about 30 subjects to launch the debate. A number of questions related directly to governance.

These are all excellent subjects. But, when the highest echelons of government are asking such questions of the general public it must make you wonder as to the solidity, not of government, but of the methodology by which a people is governed. Do you think that after the debate we’ll actually reach consensus on these issues?

With the above in mind, we have to decide what is the best system of government. Only then can we look into how to choose an individual to incarnate that providential leader, along with a properly composed and competent team to back them up.

The Explanation will reveal to you what that system is, and the qualities needed to govern as well as how those qualities can and will be inculcated into those individuals prior to their ascension to rulership.

This blog post is an excerpt from chapter 4.9 of the book Audit of Humankind.

Since you read all the way to here… you liked it. Please use the Social Network links just below to share this information from The Explanation, Government, 2 Choices, Bottom-Up or Top-Down