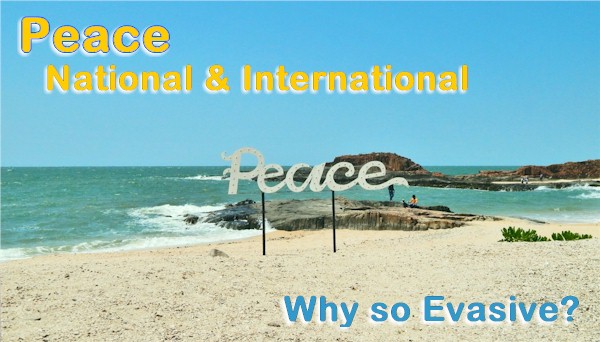 Peace on a national and international level, for the last 70 years has been a fairly present phenomenon. What about the next 70?

Peace on a National and International level seems so evasive. How is the government involved?

Peace has been tainted by some vicious local and regional wars like Vietnam, the Congo or Yemen and Syria, with thousands of lives lost. But with the 30 glorious years following WWII and the rising standard of living, we have had an episode of relative peace in world history.
(Audit of Humankind, chapter 4.8)

There are veterans of recent conflicts in Asia, Africa, and the Middle East, but most of the younger generation has been spared this nightmare. The closest they’ve been to armies facing off is on their game consoles or internet. On the other hand, National budgets for defense have exploded. It’s like installing reinforced doors and home alarms. You see the evolution of break-ins and feel you need this kind of protection. You have to create a budget just for that when it could be well used for better purposes.

Likewise, with a national defense budget. Unless you are or intend to be the biggest defense organism in the world. This was a role assumed and played by the USA until the Trump administration. With US troops being withdrawn from the Middle East and Afghanistan, that is no longer the case. Battleground vacuums have been created and other peaceful warmongers are clamoring to fill those spots. There’s no such thing as a peaceful warmonger, that just a euphemism for political takeover.

In our quest to see how we manage our planet, let’s continue our investigation of how government rules. Can and is the leadership of our nations bringing more or less peace to the world? Here are some Ministries we would need to accomplish such a task.

As I write, President Macron of France launches his consultation with the French people to find out what their condolences are. One of the big issues is the desertification of the rural areas. Public administration and transport have shut down slowly but inexorably over the last decade to where these areas feel more and more isolated. Furthermore, central government in Paris has transferred more and more responsibilities (schools, medical…) to the townships putting heavier burdens on their finances. Not a situation for peace.

The crisis has reached a breaking point with the gilets jaunes movement being a national movement that has been ongoing for weeks. Marchers have diminished, although the 9th weekend saw an increase in demonstrators, violence is on the rise. This is not a political period of peace for Macron and his government.

Government employees are upset. Police, firemen, hospital staff feel overworked, underpaid and not respected for their efforts. This was epitomized by a lady who was rushed to Emergency with a strong migraine only to be found dead some 12 later. She’d been unattended as short-handed medical staff were simply not able to treat her. The family has lodged a complaint to assess responsibility, but everyone agrees nurses and doctors are pushed to the limit as well as mis-organization and hospital budgets being brought into the picture.

Look at the shutdown of the government in the USA because of a question of building a wall to keep out immigrants coming up from the South. US science agencies hit by government shutdown, and the FDA has ceased routine inspections of food manufacturing facilities. We’re counting on good-will for public safety. When you step back from the controversy and heartache, the culprit is rulership.

Not only in the USA but in immigrant home countries where conditions may be difficult but where citizen’s expectations are not being met. Take Venezuela with some of the biggest oil reserve revenues. How were they used? Where is government’s real interest in the welfare of its people? If people were living their lives in peace at home, there would be no need for a wall.

Refugees have become a huge issue in Europe. With European elections upcoming in May 2019, it could very well be one of the major debated subjects. It already has been at the heart of the Brexit vote. Immigrant lives are at stake, but at the same time, local citizens feel their way of life is being encroached on. On top of that, with high unemployment (hovering around 9%) and medium and low-paying jobs needing less and less experienced people are concerned about this competitive labor pool.

Believe it or not, the climate change and particularly the thawing of both the Arctic and Antarctic have caused a new cold war. As shorelines recede, opening up more open water and land coveting of natural resources has taken a new turn. In the South, beyond the 60th parallel, by International treaty, the ice floes belong to no-one. They are dedicated to being a natural reserve accessible for science. On the other hand, fishing rights are another matter. They are divided among 7 nations that must get along without encroaching on one another’s allotted territory.

In the Arctic, it’s estimated there are 20% of the world’s natural gas reserves and 5% of its petroleum. That’s not counting vast territories where the biggest corporations are lining up to explore for uranium, gold, diamonds, nickel, iron and many other raw materials. With the northwest navigation passage, opening up military control and strategy are utmost in government minds.

The Lomonosov Ridge is an underwater mountain some 1800 kilometers long by 60-200 kilometers wide. It is estimated that it might contain as much oil reserves as in the Middle East. Territorial claims are still being filed and bickered over by Canada, Russia, and Denmark as each tries to prove the mountain is an extension of their continental territory.

The USA is pulling out of Syria. They feel the war against ISIS is over. What about other collateral? The Kurds, after fighting alongside the USA, now feel betrayed. They fear what Turkey has in store for them. To the point where they have to ask the Assad Government for protection. What a turn of events. The prosecutor becoming the protector. To hold Turkey at bay, President Trump has threatened a tsunami of economic waves should Turkey invade Syria. But Erdogan of Turkey can turn a deaf ear on such threats.

News doesn’t focus too much on daily life in Syria. Leila Mustafa is a 31-year-old Kurd woman, agronomist, and mayor of the Syrian town of Raqqa. An incredible story of courage, trying to return this city, which was headquarters to ISIS before being liberated, to a reasonably normal life. Everything, literally everything, has to be rebuilt. Citizens are beginning to return home, only to find ruins and rubble. There are still car-bombings in the city and to top it off, Turkey commissioned 5 men to eliminate well respected 61-year-old Omar Allouch, assistant to Mustafa, in his home. This is what happens in certain areas when well-meaning people try to restore and instill peace.

In Poland, Gdansk’s Mayor, Pawel Adamowicz, was murdered in broad daylight because his urban rulership was at odds with the national government’s outlook on how to deal with the immigrant issue. He was for welcoming them, his rulership cost him his life. This is a national issue of peace.

Peace is a much sought-after commodity. Be it on the personal, national or international level. We all crave for it but it remains strangely distant from us. To obtain that we’re going to need proper government and rulership. The quest for The Explanation is to show you how this goal will be reached.

This blog post is an excerpt from chapter 4.8 of the book Audit of Humankind.

Since you read all the way to here… you liked it. Please use the Social Network links just below to share this information from The Explanation, Peace is a National & International Government Concern