Best Form of Government, Aiming for the Common Good 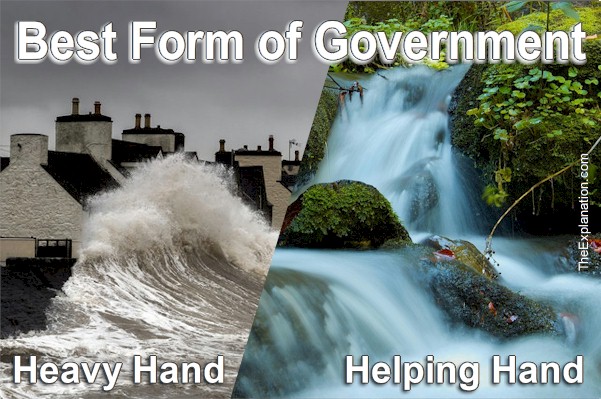 The best form of government is the one that brings peace and prosperity to all its constituents. What characterizes such leadership?

The best form of Government. Will it be heavy-handed like a roaring wave or a helping hand like a flowing river for the common good?

The best form of government is a unique formula. It looks like humankind is still in search of this treasure. Nations and international organizations have experimented with every type of governmental structure imaginable, what’s left? Could it be that along with the structure comes the nature of leadership?
(Audit of Humankind, chapter 4.10)

As this chapter on how humans rule comes to a close let me remind you of why this subject of human governance has been broached in Audit of the Universe. Humankind is at the pinnacle of intelligent beings on Earth and maybe in the Universe. The environment, planet Earth, on and in which humankind lives, supplies every necessity and every beauty for them to live happily ever after. The only thing missing is humankind’s behavior and their ability to manage this environment and themselves satisfactorily. Hence government. Hence an audit of humankind’s governance on Earth.

I’m going to take you through a scenario. Bare with me as I show you how the same qualities can lead to opposing destinations. You may be reading this for the first time so, what I’m referring to is human nature. Its duality. The Dr. Jekyl and Mr. Hyde in each of us. The choices we make and our ability to both praise and hurt those people around us. I’ll come back to this after the scenario.

What do you think of these attributes? Are they qualities that are positive or negative? Needed or not needed in governors and governed alike? Yes, there are other qualities too, but we’re discussing these, for the time being.

I believe that most people would agree that these three qualities could be a useful starting point towards some stable form of government that would lead to peace and prosperity. Obviously, there’s much, much more to be added.

As part of our scenario, I’m going to ask you to watch this 44-minute documentary-film of a high-school class experiment by their history teacher Ron Jones in 1967. You won’t be disappointed.

What do you think about discipline, community, and action now?

These positive, essential qualities can be manipulated in a very negative way to reach disastrous results. This is the ultimate top-down form of government with a totally twisted use of what are positive characteristics.  The top-down form of government may be right but it is the ORIENTATION of the leadership that is reprehensible. This is the negative side of human nature that I referred to a little higher-up.

This fascist situation arose out of the chaos and confusion that reigned in the years following the 1914-1918 conflict leading to WWII. Unfortunately, we find our world today with governments that reflect more and more uncertainty and imbalance. I’m presenting this scenario because none of us, in Europe and N. America have experienced this. We’re too young. We’ve read about it but never witnessed it ourselves, first-hand.

Maybe, because of open communication, journalism, and political watch groups, we think repetition of a new rise of fascism is impossible. We’re grounded in democracy and the balance of power, therefore a form of totalitarian government akin to the 1930s and the above movie is no longer possible. History can’t repeat itself with such horror is what we think. Well, let’s let the experts comment on this.

Namely a presentation of Madeleine Albright the former Secretary of State (Foreign Affairs) in the Clinton Administration. She was born in Czechoslovakia in 1937 and experienced WWII as a young child before moving to the USA in 1948. In here NY Times best selling book, Fascism: A Warning she says, A fascist “is someone who claims to speak for a whole nation or group, is utterly unconcerned with the rights of others, and is willing to use violence and whatever other means are necessary to achieve the goals he or she might have.” You can listen to a sample of the book regarding the demise of democracy and you can read a revealing extract here.

Fascism, as she shows, not only endured through the twentieth century but now presents a more virulent threat to peace and justice than at any time since the end of World War II.  The momentum toward democracy that swept the world when the Berlin Wall fell has gone into reverse.  The United States, which historically championed the free world, is led by a president who exacerbates division and heaps scorn on democratic institutions.  In many countries, economic, technological, and cultural factors are weakening the political center and empowering the extremes of right and left.  Contemporary leaders such as Vladimir Putin and Kim Jong-un are employing many of the tactics used by Fascists in the 1920s and 30s.

If you follow the news regarding government and leadership worldwide you have to be struck by leadership of the Maduro type in Venezuela. As the BBC headlined, Venezuela’s Nicolás Maduro: Dictator or defender of socialism? Six countries are in favor of Maduro, 18 are pro-Guaido and 2, including China, have remained neutral with the injunction to not get involved in Venezuela’s internal affairs. South America is scrambling because they don’t know how to deal with this messy governance issue.

I don’t want to belabor this point but Turkey is acting autocratically with regard to the auto-determination desire of the Kurds. Italy is mandatorily refusing to accept any migrants arriving after being saved from drowning in the Mediterranean. Leila Moustapha, a young Kurdish woman, the mayor of the war-destroyed city of Raqqa, Syria is trying to rebuild the city while undergoing continued threats on her life from hostile remnants of ISIS and Damascus try to maintain their own hegemony over the area.

Even In France, we have a call for more military-oriented leadership. The Guardian reports

Cohn-Bendit, now a friend and adviser to President Emmanuel Macron, said: “This movement is very different to May 68. Back then, we wanted to get rid of a general (Charles de Gaulle); today these people want to put a general in power,” he said, referring to calls by certain gilets jaunes for the former chief of defence staff General Pierre de Villiers, who resigned after falling out with Macron in July 2017, to be made prime minister.

A poll in France, unfortunately, I don’t have the reference, stated that four out of ten people are calling for a strong leader. This is not limited to France, it is Europe-wide. It is European continent-wide. With one of the strongest continental-wide economies, intellectual reservoir, education systems, financial stability and many other trump-cards, Europe is non-existent in continental leadership. It is a pawn when it could be a king in world leadership. Right now, the pieces of governance are strewn around in confusion. Can and will this situation last, in light of world events?

Tim Lister, CNN, concludes his article, Are we sliding back to the chaos of the 1930s? this way

The trouble is, in the midst of Brexit and badly split over immigration, Europe looks ill equipped to sort out its own destiny, especially as Russia seems so intent on meddling in European politics on the side of the populists.

On multiple fronts, the international liberal order is being challenged because it has lost the confidence of people who feel left behind and “swamped” by immigration, as former British Prime Minister Margaret Thatcher put it 40 years ago. Trump, Orban, Salvini, Marine Le Pen of the Mouvement National in France, have become their champions.

As Martin Wolf asks in the Financial Times, “Should we expect the old America back? Not until someone finds a more politically successful way of meeting the needs and anxieties of ordinary people.”

A summary would be. After thousands of years of human existence, we’re in one of the worst throes of poor government at best, and of deathly government at worst. Those three characteristics of discipline, community and action are not being incorporated to bring about the best form of government, by any means.

The best form of government is

A few days ago, in the midst of the gilets jaunes crisis here in France, the Great Debate (Grand Debat) got underway and a special, rather unusual, TV show was presented. Marlene Schiappa, the Secretary of State for the Equality of women and men (yes, we have that in France) who reports directly to the Prime Minister, asked Cyril Hanouna if she could come on his TV program to talk with the French people, especially the gilets jaunes.

His program, Balance Ton Poste (Rat on your TV content) a takeoff of Balance Ton Porc (hard to translate – rat on your harasser) is rather controversial. It’s humorous with invective and reaches a general public audience. This is in contrast to political debates that have a more intellectual rating. Schiappa was criticized for going on this show.

The end result was seven suggested ideas to improve the quality of life in France. But, the reason I bring this up is that a member of the government wanted to feel the pulse of the general public. She was aiming for the common good. I watched a part of the program and I thought it worked well. We’ll see what the outcome will be.

That is the community of our three characteristics. Government and its leaders have to be close, close, close to those they govern. Leaders really need to have walked in the common man’s footsteps and life. Leaders have to be aware, not only of the hourly-wage, monthly salary, and working conditions but of the anxieties, worries, and social, home-issues their constituents bare day-in, day-out.

There has to be discipline, But it has to be accepted and self-imposed, not enforced from the top-down. Citizens need to see their actions in light of their own obligations, not in the light of if I don’t do this, I’ll be in trouble. One is peaceable and the other troubled discipline. I cannot elaborate here but this relative prosperity, right law, justice, and education do play an important role in this.

The best form of government is when all the leaders, at every level, are devoted to seeing those over whom they’ve been given rule, benefit from all aspects of life.

Realistically, and unfortunately, this doesn’t appear to be around the corner. But The Explanation will show you how such leadership is coming, how it will be trained, how it will be prepared and how it will instill a world government of peace and prosperity on Earth.

This blog post is an excerpt from chapter 4.10 of the book Audit of Humankind.

Since you read all the way to here… you liked it. Please use the Social Network links just below to share this information from The Explanation, Best Form of Government, Aiming for the Common Good