Your Starting Point: Higher Power or Not? Spiritual or Secular? 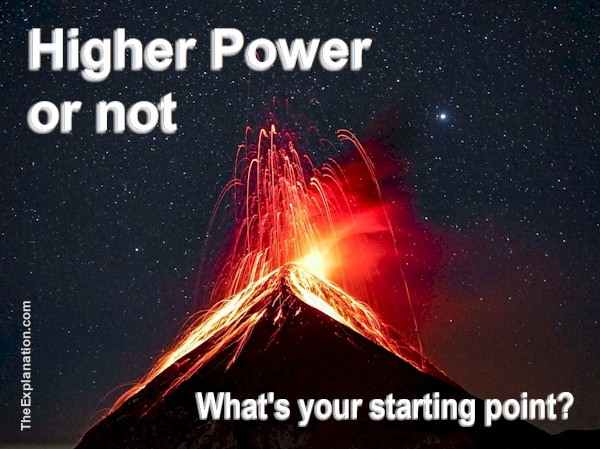 Does your belief start with a Higher Power or not? There’s no right or wrong answer 🙂 It’s a matter of how we approach the mind-body problem.

Either way, The Explanation already said Science, Philosophy, and Religion do not have the answers. So, whether you start from the spiritual or the secular, you are going to have to make some serious adjustments to solve the mind-body problem.

In this book, The Explanation must address both starting points and guide us to harmony. That is no small task. Whether you start from science, philosophy, or religion, I hope you realize that all three disciplines have enormous gaps of knowledge.

The three mainstays of human reasoning are unaware of the extent of damage to their vehicle. They don’t know what the problem is. First, we have to be educated about the issue… so, let’s do it.

This book has 2 parts. I’m going to use the analogy of a puzzle with 557,707 pieces to show you the value and reasons for each part.

You cannot start a conversation with the 1st group talking about SPIRITUAL things. You must begin with the physical. That’s the first part of this book.

Inventory of the Universe, Audit of the Universe, and Audit of Humankind, the first three books of The Explanation series address this issue. In the physical area, this is the reason the mind-body problem has not and cannot find a solution; because there’s a non-physical element involved.

Science and philosophy limit themselves to the PHYSICAL arena and HUMAN imagination. Granted, those are vast territories and incredible discoveries have and are being revealed. However, they are devoted to WHAT things are and HOW they work. The WHY is missing. WHY does the universe exist? WHY do human beings work the way they do? Their endless imagination hems in science and philosophy, which because of their aura, can assert statements like “the universe can create itself from nothing” (Stephen Hawking in his book, The Grand Design), and many people accept it based on the scientific reputation of the individual.

John Horgan addresses what he calls ironic science in his superb book The End of Science.

He defined “ironic science” as “speculative” and “post-empirical,” and I said that it is more akin to philosophy, literary criticism and even literature itself than to genuine science. Ironic science “offers points of view, opinions, which are, at best, interesting… But it does not converge on the truth.”

This first group must understand they don’t have the answers to the WHY questions. Furthermore, there are extra-physical phenomena that are FACTS the PHYSICAL SENSES cannot explain. Until science and philosophy understand this, there’s no point in addressing the second part of the mind-body problem. Well, I’m exaggerating because it is possible that reading some sensible information about the spiritual world might help.

The first part of this book paints a physical portrait of our universe. The Explanation has gone to great lengths, in Inventory of the Universe, to focus on what appears to be stupid questions like which came first, the chicken or the egg? After all, there has to be an answer. Here’s what one reader said about this narrative of the material universe.

This book is amazing! First of all, as an evangelist who delves deeply into the Word of God (the Bible), I had already surmised what Sam is saying in this book. Second, as a scientist, it makes so much sense that our universe could only have been created out of intelligent design, no other way. The detail that he writes is phenomenal; I understand every bit of it.

I only wish that I had this book back in the 70s when I was teaching general science to 9th graders; they would have latched on to it with far more enthusiasm than those boring textbooks that we had that many of them could not even read. But I would have used this book instead to teach them a well-rounded science course from it. And they would be so much better for it because they would have appreciated and embraced science. Fantastic!

I will state upfront, the goal is to help these physicalists understand that there’s something beyond materialism and matter. It is not a quest to convert anyone to anything. The mind-body problem goes beyond the material and unless science and philosophy open their minds (sic) to this eventuality, they will remain in the domain of confusion.

Those who believe in a Higher Power may want to jump ahead to the second part of this book and get straight into the explanation of the mind-body problem. There are references back to the physical aspect of this question when need be.

BUT, that doesn’t mean our group of believers in a higher power is scot-free. Not by any means. These people are in the spiritual-religious category. And that is possibly even more complicated than the material group. The opposition of beliefs among this group is staggering. In Audit of Humankind, How Humans Reason, I address the cacophony in the spiritual domain. Between ChurchES, meditation, Western Christianity, Eastern esotericism, and spirituality, whatever form it takes, there is a universe of differences in spiritual beliefs. This group, just because it believes in the existence of the spiritual, is by no means out of hot water.

WHERE can we find answers to those questions? How do we know we have the correct SOURCE? How do we UNDERSTAND that source? The answers by experts to those questions are plethoric. Hence the total anarchy in the spiritual and religious areas and the absence of an authentic response to the mind-body problem.

These spiritual people can begin in the second part of this book, but unless we come to some sort of consensus about WHERE to find answers and HOW to interpret what we FIND; they’ll still be lost as ever floundering around in spiritual Neverland.

Whether it’s science, philosophy, or religion, turbulence and turmoil of ideas, theories, and concepts reign.

Where do we start?

The Mind-Body Problem Solved is not Sam’s solution

The Explanation will explain why we have to go to one source, the Bible. I realize, in writing this, many immediately feel negative about reading further. I told you answering the mind-body problem will be challenging and cause upset. Are you already going to quit? We’re only discussing the puzzle pieces, we haven’t even turned them right side up yet :). Stay with me.

Here’s the dilemma of the mind-body problem.

Wow, Sam, that’s a strong allegation. What do you mean? Let’s take a closer look at this verse.

And the LORD God formed man of the dust of the ground, and breathed into his nostrils the breath of life; and man became a living soul.

A lot of these singulars and plurals and variations for the same word are invisible in English. If we want appropriate answers, we have no choice but to delve into Biblical Hebrew. But you’re not a scholar, and neither am I! That’s why we need a method. I’ll show you how to unlock the God-intended meaning.

Now tell me you understand this verse and can answer all those questions. Go talk to a scientist, philosopher, pastor, or any other spiritual figure and ask them for answers to those questions. We are not interested in any answers. The solution must be coherent and it must relate to every single human being, past, present, and future. God is the God of humankind, or He isn’t.

We might have a spiritual component, but we do live in a physical world, they must relate. How? One of The Explanation’s readers asked a very pertinent question recently. What happens to people born with or who develop impaired minds? Do they get preferential spiritual treatment or none?

When you can answer all those questions about Genesis 2:7 and many others like the impaired mind, then you will answer the mind-body problem with assurance and verity.

This book, the Mind-Body Problem Solved, will explain Genesis 2:7 and answer all the above questions and many more. That’s the sole purpose of its writing.

Since you read all the way to here… you liked it. Please use the Social Network links just below to share this information from The Explanation, Your Starting Point: Higher Power or Not? Spiritual or Secular?