Did a Fine-Tuned Universe Give Rise to Our Dazzling Earth? 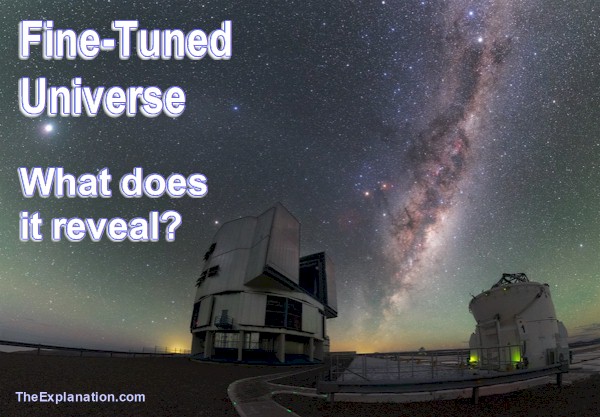 What insight do we gain from the immense, observable fine-tuned universe? Science reveals eye-popping facts and figures. How do we interpret them?

On Dec. 24th, 2021 NASA launched the James Webb Space Telescope. Its revolutionary technology will study every phase of cosmic history—from within our solar system to the most distant observable galaxies in the early universe. We’ll get closer to understanding the origins of our fine-tuned universe. It will gaze at galaxies formed over 13.5 billion years ago with unprecedented resolution and sensitivity.
(Mind-Body Problem Solved, Chapter 1)

We, humans, are minute specks in this vast arena, but, to our knowledge, we alone have minds capable of launching such a venture and digesting the incredible amounts of data gathered from this mission. Our investigations have already revealed astounding facts.

At the two extremes of this equation are two unknowns. The origin of the Universe and the origin of the mind. Where did they come from? Why do they function as they do? Is there a relationship between the two? Are they “just there,” or is there some underlying purpose for their existence? These are questions, this book, Mind-Body Problem Solved, will elaborate on.

The fine-tuned Universe and humans interconnect because each of us is stardust. Yes, the same fundamental elements composing the Universe are part of our bodies and brains. Of the 92 naturally occurring elements, the human body contains about 60. These elements, or fundamental building blocks of matter, everything physical, observable by our senses, formed over billions of years as the Universe developed and continues to expand.

You can delve into the exciting details in Inventory of the Universe: Expanding Finity, Atmospheric Cocoon, the various layers of the atmosphere protect Earth’s inhabitants from nauseous waves while letting through just what’s necessary. Planet Water, the mystery of the origin of all the fresh and saltwater. Our Earth is about 6,000°C at the core with the Sun’s surface, at 6,000°C and Earth’s surface, just right to walk barefoot on the beach. From Big Bang, the point of departure, some 14 billion years ago to our present-day 93 billion light-years diameter universe. When life arrived on our planet, all the elements were already there. That became the raw material for life, which we’ll discuss in the next chapter.

We need to look up at the sky and realize the amazing circumstances leading to our presence on Earth.

The Precision of the Universe

The premise of the fine-tuned universe assertion is that a small change in several of the physical constants would make the universe radically different. As Stephen Hawking has noted, “The laws of science, as we know them at present, contain many fundamental numbers, like the size of the electric charge of the electron and the ratio of the masses of the proton and the electron. … The remarkable fact is that the values of these numbers seem to have been very finely adjusted to make possible the development of life.”

Hawking attributes these fine-tuned episodes in the universe’s formation to fortunate coincidences. So, tell me, how many of these “lucky happenings” have to occur before you begin to say “wow, something extraordinary is going on here?” I will remind you of this remark because, as we survey the processes of the establishment of the Universe, Earth, and life, there are many such coincidences. For instance, the layers of the atmosphere at exactly the right distance from Earth, and density to both protect (from adverse gamma rays) and nurture humankind with vitamin D.

And having enough saltwater for the abundant supply of fish that nourishes 40% of our world’s population. Or enough renewable resources to provide 22,000,000,000 (billion) meals (breakfast, lunch, and dinner) a day for close to eight billion people on Earth. If only we managed them properly, but that’s another story. Our normal thought patterns don’t focus on such events, do they?

The 25 fundamental constants so we exist

The Universe appears to be enormously fine-tuned.

On the one hand, we have the expansion rate that the Universe had initially, close to the Big Bang. On the other hand, we have the sum total of all the forms of matter and energy that existed at that early time as well, including:

Einstein’s General theory of Relativity gives us an intricate relationship between the expansion rate and the sum total of all the different forms of energy in it. If you know what your Universe is made of and how quickly it starts expanding initially, you can predict how it will evolve with time, including what its fate will be.

A Universe with too much matter-and-energy for its expansion rate will recollapse in short order; a Universe with too little will expand into oblivion before it’s possible to even form atoms. Yet not only has our Universe neither recollapsed nor failed to yield atoms, but even today, some 13.8 billion years after the Big Bang, those two sides of the equation appear to be perfectly in balance.

It’s like guessing the same 1-to-1,000,000 number as me three times in a row, and then predicting the outcome of 16 consecutive coin-flips immediately afterward. The odds of this occurring naturally, if we consider all the random possibilities we could have imagined, are astronomically small.

Scientists wrote the above descriptions and arrived at the betting odds. Of course, Science would in no way invoke a Higher Power with the capacity to set such a scenario in motion.

I don’t understand any of the figures, and you probably won’t either. Wikipedia says the following.

The complete standard model requires 25 fundamental dimensionless constants. At present, their numerical values are not understood in terms of any widely accepted theory and are determined only from measurement. There’s a list of the 25 constants. Here are just two to demonstrate the complexity and precision:

Note these are confirmed measurements but are not understood in a widely accepted theory. Scientists don’t know how to assemble the pieces of the puzzle.

On the other hand, religion uses this as a watchmaker argument to prove there’s a Creator. And there’s even a well-known narrative, Genesis 1, although most theologians would not take this at face value. And there again, interpretations are boundless.

In the next chapter, we’ll discuss life and the fine-tuned biological world. Now, I want to leave you with a thought as we progress in our solution to the mind-body problem. The first step is the need for the physical, material substance. A second obligatory step is moving from the inert, inorganic to the alive, organic. From dead rocks to living cells.

This is one of those fundamental queries few talk about when it comes to evolution and the origin of life. It means, how do we turn a rock into a living creature. It has nothing to do with living creatures developing into higher beings like apes to humans. This is the transformation of a mineral into a living cell. The inorganic matter like sand, water, and sun into even the smallest form of life, like a one-celled amoeba. There is absolutely no evidence for this. There is no known process for this. No skeletons or archaeological artifacts, nothing, nada.

There are only maybes, could bes, suppositions, and I think. This absence of evidence is NOT a proof of God. But it should prick your mind. This is a visible fact manifested to us by science that should tick a box, be a clue to the possibility there’s something invisible out there.

It’s impossible to develop such a subject here. Read this for a scientific search for transforming minerals into life. Always note the number of could have (3), may have (2), plausible (2), possible (1) in such articles like myriad possible combinations of environmental conditions to find those that could initiate life.

True, the above proves nothing. That’s where we have to be extremely careful because of info-gap. We know we don’t have all the knowledge, but we could discover it in the future. The widespread mythological idea, also spread by religion, that Earth is the center of the Universe is one example. Until science proved otherwise. Science is very useful, but it has its limits that science should recognize.

I don’t know where your beliefs stand. I’m not presenting the fine-tuned argument as proof of the existence of God. I am presenting it as evidence there MIGHT be something there we need to consider. How much evidence do we need to make a solid case? There’s much more to come.

Since you read all the way to here… you liked it. Please use the Social Network links just below to share this information from The Explanation, Did a Fine-Tuned Universe Give Rise to Our Dazzling Earth?