How much of our World is Two Faced? 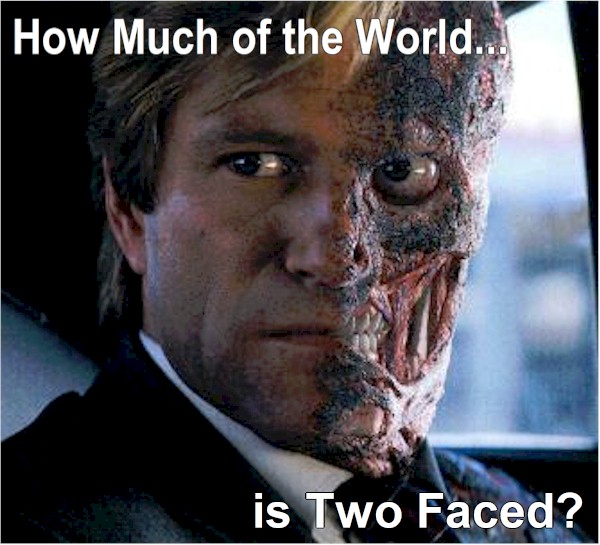 This image shows Two-Face as a two faced protector/villain. But how much of both or each of the two sides is really hidden from us? Or rather should I say, we don’t see? Two faced. When we hear about situations… how long has it been two faced? are we aware of both sides? Or do we hide one of them? (Photo via Wikipedia)

What got me onto this subject was an article I read about the state of the country, Greece. In Europe, this has been a daily, hotly debated subject over the last few months. It has died down a little now, but will flare up shortly as the problem is anywhere from solved. In fact, even the last agreement has down nothing but exacerbate the real issues.

And I was thinking about my attitude towards Greece and especially the Greek, the population that is living this nightmare… and where my feelings went and where the bottom line lies.

You see, it goes much further than that. Greece and Greek leaders are in the midst of a contradiction. They want both ends of the stick but, depending on your stance, only tend to talk about their end of the stick, their side of the face, while the other side is the most hidden possible.

Once again, we sympathize with the Greek people, it’s a beautiful country and we obviously wish they weren’t in this situation. The Explanation simply highlights it to show the state of confusion and contradiction that we find ourselves in today.

Did you know? I didn’t… the Greece spends 4% of its GDP, gross domestic product, double that of France, about equal to the USA and 40% that of Saudi Arabia. Retirees have seen their pensions melt in the sun and I sympathize with that, but on the other hand retirement is often taken at 50 years old in 580 professions considered dangerous amongst which we find baking and modeling. Not to talk about the tax system and its application. That is what allows the state to have revenue and pay for the country’s functioning.

Of course, much could be said about the tax systems in just about all countries and, amongst other things, the two faced situation where elected officials are ‘reducing’ taxes to garner political adhesion and ‘increasing’ taxes to pay for some of their extravagant projects… again, to leave their mark on society.

Here are a few brief examples of two faced situations… but you can think of many more, not only on national levels but local and personal ones too, obviously to do with people around, not with ourselves… I say, tongue in cheek.

Saudi Arabia which, supposedly is stoking and stamping our terrorism.

Turkey has gotten into the war against the Islamic State. why did it take so long? Turkey has practically always been at arms against the Kurdistan Workers’ Party, usually referred to by its Kurdish acronym, PKK (Partiya Karkerên Kurdistanê). This is a militant organization that represents some 30 million Kurds living in Turkey, Syria, Iran and Irak to the East and South of Turkey… the exact same area where the Islamic State is installed. They would like to have their own independent area apart from Turkey. The PKK has been hard at fighting IS… and one would think that Turkey would welcome the help and be ‘friends.

Instead, skirmishes have broken out, once again, after a more or less truce had been in place since March 2013. Is there a two faced game going on here.

Socialists in France using economics from the right… what about their electorate?
Supermarkets who are promoting French products and selling milk at a loss hurting farmers who can’t earn enough to keep their farms running properly.

Germany received all sorts of help to draw it out of ruin… now they want to bring the hammer down on Greece. it’s easy to write that. Again, there are two sides to this story, both the first and second section about Germany and Greece… and debates bring out those similarities and differences.

It is not the intention of The Explanation either to take side or give advice, again, just to show what’s happening in the overall puzzle. This is another one of those pieces that need to be worked out… How to handle debt? How to handle a country’s economy? How a population participates in its own economy? How to handle relationships between nations?

How can we put the pieces of the puzzle together when nations and people are playing two faced games. And even deeper, before we can have peace and prosperity, do we solve the problem at the national level first or the people level first? Where do we start in order to really have a semblance of orderly living?

Although only indirectly related to two faced behavior here are the top indebted nations in Europe: Greece 172% of Gross Domestic Product, Italy 133%, Portugal 126%, Spain 99% and France 97%. Belgium and Ireland are in the 100+% as well. Some of these are considered stable, solid foundational countries on the political scene. What is the reality?

Two Face was a character in a Batman movie… unreal but the characteristic of presenting and being two faced is very real.

The introductory goal of The Explanation is to make us aware of how the puzzle is out of kilter… in a lot of areas, probably more than we realize. One thing we can say is that the pieces are so far removed from peace and prosperity as to be unrecognizable. Today I talked about ‘two faced’ in the context of economy and military conflicts. These are major areas… how is this going to be reorganized for Peace and Prosperity. Answers will come, in the meantime I suggest you take a look at ‘Answering the Big questions in Life.’

Since you read all the way to here… you liked it. Please use the Social Network links just below to share this information from The Explanation, How much of our World is Two Faced?