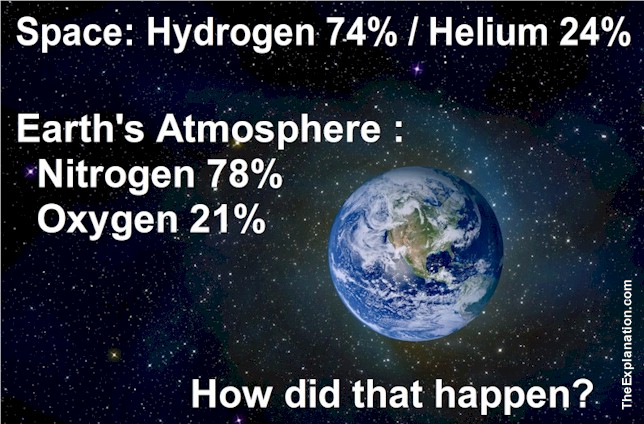 The predominant proportion of gases in the universe is 74 percent hydrogen and 24 percent helium. So why, then, do the layers of Earth’s atmosphere have a totally different composition: the nitrogen – oxygen ratio is 78 percent to 21 percent. Even more enigmatic, why do entirely different gases have predominance within Earth’s confines?
(chapter 2.7-8)

Nowhere else in the universe, to our knowledge, do we find such a blend. An apple pie chart displays the atmosphere in the “neighborhood.” Nitrogen and oxygen, along with a mere 1 percent, including 5 parts in a million of Helium, and all the other vital gases, combine to support life.

You don’t find that on turbulent Jupiter. We can ask, “Why are nitrogen and oxygen in the majority on Earth? Where did they originate? How and when did our atmosphere trap them? How and when were these proportions established?”

I examine the specifications and features of the nitrogen – oxygen atmosphere in the real estate brochure for Earth. Oxygen: check. I know that, as humans, we need oxygen for combustion, heat, and fire to cook our food. Most of all, we need oxygen to breathe. No need for Helium at all. The Photosynthesis cycle … we humans and the animals breathe oxygen and emit carbon dioxide. The plants take up carbon dioxide and restitute oxygen… It’s been in perfect balance for billions of years… even before man came on the scene.

Moreover, that oxygen inside our lungs works in concert with “fuel” from foods to provide the muscular energy we burn and the 37 degrees Celsius body heat we need to maintain our vital organs in working order. We breathe carbon dioxide out into the atmosphere, and the trees that shade our heads carry out a complementary process: combining energy with this carbon dioxide and other elements.

We have not been able to recreate this balance artificially without requiring pumped-in oxygen. Without a steady, reliable supply of oxygen, no life, no combustion, and no energy can be released to run our bodies. Oxygen is covered. Check. What about nitrogen?

Since oxygen receives all the press, you might be surprised to know that nitrogen is the basis of life. If you test the most basic building blocks (amino acids and proteins), you will find nitrogen.

We might think nitrogen insignificant, even in light of its role in DNA. It is unreactive under normal temperatures and pressure and inert in relation to other chemicals, meaning it doesn’t combine and merge easily, despite its efficacy in DNA.

It doesn’t make chemical reactions with other elements from the Earth. In other words, it’s as dull as reading the fine print of a real estate contract. Yes, nitrogen forms amino acids, which are the basis of life, but nitrogen on the surface looks like Clark Kent: boring and barely noticeable. However, nitrogen has a singular Superman property.

How can this lifeless element, representing 78 percent of atmospheric content, be assimilated into plants, animals, and humans that have no direct absorption process for this fundamental building block of life?

We shrink down to the soil and burrow inside on the backs of earthworms so that we can see microorganisms in the soil convert nitrogen from the air into compounds called nitrates. Nitrogen, the overwhelming majority gas in our atmosphere is life and needs life — one of the most mysterious cycles in nature.

Like the sun’s rays assist Superman, bacteria in the roots of beans, peas, and alfalfa convert nitrogen into nitrates and ammonia. Other plants absorb these trace nutrients in order to grow.

Imagine eating tasty Louisiana red beans and rice while knowing nitrates are entering your body. Plants, vegetables, and fruit as well as fish, meat, and animal products give us our essential share of nitrogen, which our bodies turn into amino acids and proteins that enrich our biological processes.

We won’t become Superman, but we’ll be healthy for the remainder of our journey and strong enough for The Explanation.

In the meantime, we’ll learn that those sole living microorganisms and bacteria capable of transforming atmospheric nitrogen into absorbable nitrates—a process that has been dubbed one of the most extraordinary chemical processes ever—actually possess DNA, amino acids and nitrates within their own cells. How can this be?

Galacti changes hats, from real estate agent to welcoming party. “Let’s put the nitrogen question on the back burner for the moment,” he says. For now, let’s just experience the clean air in our lungs, be happy for the protection of the atmosphere that shields us from the universe’s blend of helium and hydrogen, and know Earth’s atmosphere as a life-facilitator.

The just-right, life-sustaining “home brew” of oxygen and nitrogen still remains an intriguing puzzle in our minds, and nitrogen’s role specifically. We know something of how it works, but we don’t know the entire picture. Where did this balance come from?

If we want peace and prosperity on Earth, these situations and questions are part of it. We think that we can create Earth’s environment elsewhere, as we’ll discuss in book two, but let’s open your eyes, nose, and mouth and breathe in the atmosphere as part of The Explanation.

Take some time to reflect on the atmosphere while we walk, hike, lie on our backs at the beach, camp, and gaze up at the sky—at those invisible layers which cocoon our daily lives; not only our bodies, but our comfort via communications, warmth, and oxygen.

Without these basic elements, there wouldn’t be a you and I, and we wouldn’t be able to begin to ask questions about harmony on Earth and the role water plays. Clearly our excursion and Inventory taking of our surroundings is just beginning.

This post is an excerpt from chapter 2.7-8 of Inventory of the Universe.

Since you read all the way to here… you liked it. Please use the Social Network links just below to share this information from The Explanation, The Hydrogen – Helium, Nitrogen – Oxygen Mystery