Planet Water – our Cocoon of Survival and Beauty 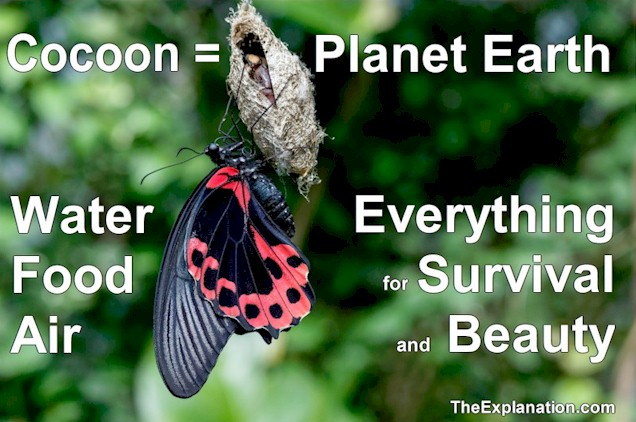 And there it is, planet water, planet earth, the cocoon with everything for survival and beauty. Planet water, planet earth, the cocoon with everything for survival and beauty.

Imagine the unimaginable. We are literally splashing around in the ocean now in our quest seeking The Explanation. We are treading water.
(Inventory of the Universe, chapter 3.1)

Remember the pinhead crammed with all the particles and all the energy in the universe. It’s also what is known as a causality dilemma, the relationship between two events. The first is the cause and the second is the effect, the latter being the consequence of the former. Which came first, the chicken or the egg? It’s easy to smirk and dismiss this question as fuzzy rhetoric.

Nitrogen is inert and needs live bacteria to render it biologically consumable, but live bacteria must have nitrogen in their amino acids to be alive, so which came first? Such questions can degenerate into metaphysical and philosophical squabbles, which we want to avoid here. Our time-traveling tour guide is bored with them, since he already knows such dilemmas are real and do exist, and we will see more of them as we proceed.

This leads us to The Explanation, but before that it is basic to lay out the questions. When you put a jigsaw puzzle together, the first thing you do is turn over each piece so you can see the picture side. That’s what we’re doing here—turning some basic “life” subjects right side up so that you can see each piece in the overall perspective of the entire 1,000-piece puzzle. Let’s turn over the “water” piece.

The title of the last chapter, “Atmospheric Cocoon,” is deliberate. I could have titled this chapter “Water Cocoon.” As we submerge ourselves in the subject of water, think about the second word in both titles.

The word “cocoon” connotes a couple of meanings: “comfort,” as in swaddling, or “cocooning,” as in the more classic silkworm cocoon. Both of these usages apply to the atmosphere, but the second usage implies an important principle.

The silk-worm cocoon is a closed environment; that is, within the cocoon are all the elements needed for the livelihood of the silkworm during that period of its life. Nothing is added and nothing is subtracted; thus, the cocoon contains the quantity and quality of essentials necessary for survival and growth until the next stage of development is reached.

With regard to the silkworm cocoon and the earthly cocoon—of which planet Earth is the nucleus—the closed environment analogy isn’t fully correct, since both cocoons are permeable to the light and heat of the sun’s rays.

However, with regard to elements in our troposphere, the lowest layer of Earth’s atmosphere, we do have impermeability. Both the upper and lower aspects of the water cycle, which we will soon explore, are a closed circuit.

The clouds from the upper aspect provide the sprinkler system that delivers water to the lakes and rivers and ultimately to the underground aquifers (the lower aspect). Underground aquifers function as Earth’s water storage system, working together with the sprinklers to provide a precise, unchanging amount of an absolutely essential element for life in our cocoon: water.

The estimated quantity of water on Earth is 1,386,000,000 cubic kilometers, which we can see hovering in front of our face in a holographic projection of a single cube. World water resources depicted in a cube displaying the minute portion of fresh water that man disposes of for his well-being.

Each tiny cube (such as the one representing biological water) corresponds to approximately 1,000 cubic kilometers of water with a mass of approximately one trillion tons (200,000 times that of the Great Pyramid of Giza or five times that of Lake Kariba in Zimbabwe, the largest man-made reservoir).

The entire block comprises one million tiny cubes, each having sides of 1,000 kilometers, which is the distance from Kuwait to Qatar.

Our time-traveling guide thinks it humorous to plunk a cube in the middle of two desert nations. The water block contains the estimated quantity of water on Earth: a stable, static quantity that the cocoon and all it contains has at its disposition. Not one bathtub more, not one bathtub less.

Seeing the cube positioned in the Arabian Desert makes us realize water is a commodity we, especially in the developed world, take for granted. This life-giver, life-protector, and life-facilitator is just there, readily available when we want it for whatever use.

It rarely gets much of a second thought until hurricanes and floods occupy the international news, or in movies such as the 1995 Waterworld. Waterworld is science fiction scenario built around the idea that the polar ice caps melt and flood the Earth in a post-apocalyptic world.

Yet water needs more than a second thought in our humdrum daily life that is absent of disasters, for it is one of the three prime substances on which life depends. We breathe the air in the atmosphere, and we drink water (from a cup, not from the cube). Next, it will most likely be time for lunch, and this will be a perfect opportunity to talk about food in chapter 4.

We are moving along and taking an Inventory of our Earthly cocoon. This global approach takes a bit of time and patience to uncover the bigger picture.

Although we have access to the library of the universe and can read all the books and watch all the documentaries that cover this subject, we would rather situate water in a broad overall picture in a visual representation that we can see and experience in 4-D, with smell and other senses, right before our eyes, hence the “water cycle.”

This post is an excerpt from chapter 3.1 of Inventory of the Universe.

This next video is a very well done documentary about the ocean. Many facts and much to learn with regard to relationship between land and ocean and living creatures.

Understand that The Explanation does not agree with all the outlook and statements in these documentaries, videos and articles but they are helpful for an overall comprehension of the majesty of the oceans and the interconnections that Inventory of the Universe prones.

Since you read all the way to here… you liked it. Please use the Social Network links just below to share this information from The Explanation, Planet Water – our Cocoon of Survival and Beauty