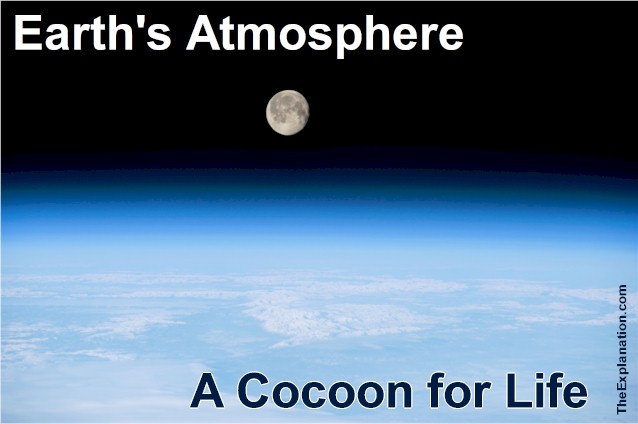 Earth’s atmosphere contains all the ingredients for life. It possesses the exact cocoon conditions necessary for life on Earth. Ever wondered why? A nearly full moon shines brightly on the Earth’s atmosphere on Mar.8, 2015 enticing astronauts aboard the ISS to snap this image of our life-preserving cocoon.

From space you can see the protective bubble we call the atmosphere—a multilayered barrier that protects Earth’s inhabitants from the -270 degrees Celsius of frigid space. In proportion to the Earth, the protective atmosphere shield is thinner than the skin of an apple.

Our apple peel atmosphere is primarily composed of 78 percent nitrogen and 21 percent oxygen. On the apple pie chart of the Earth’s atmosphere, we can see that nitrogen and oxygen leave 1 percent for numerous other vital gases including ozone, carbon dioxide, and water vapor.

These proportions are not accidental, since the gases must be in exact proportions to support life on Earth. There’s no minor role here; each is essential.

On our descent to Earth, we pass through each layer of Earth’s atmosphere. We are, in essence, passing through even thinner slices of the apple peel and each one mirrors the exact element proportions of the entire atmosphere.

Stop One: the Magnetosphere

Compare the magnetosphere to a set of brand-new solar panels on the roof of your house. The magnetosphere is the uppermost limit of Earth’s magnetic field, from which we derive magnetic and electric forces while retaining and protecting the planet from the Sun’s high-energy radiation particles.

On our real estate tour we ask about satellite TV, radio, and high-speed Internet communication in our prospective neighborhood. We come to understand that the ionosphere reflects radio waves back to Earth. Without the Ionosphere, we would be in a “dead zone,” as the cell phone commercials say.

“I call this the ‘greenhouse level,’” Galacti says as we cross the thin but vital ozone layer, without which Earth would be exposed to deadly UV light that would barbecue us. Think of ozone as a weatherizing shield that works with the stratosphere and troposphere to protect our prospective home. We’ll hear more on the “greenhouse level” in a bit.

We ask about the watering and irrigation system. Will our new home be fertile? Will it have fresh water? What about waste elimination? We imagine a voiceover, as if from a TV ad for real estate, telling us to “Take a look at those clouds. Nature’s watering system.

They pour out lifegiving rain while recycling water and other chemicals in the evaporation/precipitation processes. Don’t be afraid of all the lightning and thunder, even though there are 1,800 thunderstorms in progress at any given time within the stratosphere.”

Now we proceed to the interior which includes the air conditioning, electricity, and heat that sustain life. Think of it as a house with the thermostat set at twenty degrees Celsius. Inside that home, we have the ideal mixture of nitrogen, oxygen, heat, and light to support life on the Earth’s surface at sea level and above. Twenty percent of the worldwide population lives less than twenty-five meters above sea level.

I’m reminded of a visit to the highest train station in Europe: Jungfraujoch, located near Bern in Switzerland. Our guide said to be careful as we alighted at an altitude of 3,500m. Indeed, I felt dizzy and short of breath and I had difficulty climbing stairs.

Yes, you can get acclimated, but our bodies don’t function optimally at such altitudes. Some feel discomfort at 750m, the altitude of Sao Paulo or Jerusalem. That’s a little shy of the 163 floors of the Burj Khalifa in Dubai, the tallest skyscraper in the world at 828m.

After my breathtaking Jungfraujoch alpine visit, I was glad to come down to Kleine Scheidegg railway station at a more reasonable 2000m, where I could appreciate breathing more freely. Considering the astronomic distances of the universe, man functions in exceptionally narrow parameters.

Now, as we stand on the Earth’s surface, Galacti lets us wander about on our own. We look at the eye-catching displays he has created, such as the figure below: a visual layout of Galacti’s Earth “open house.”

We can see the path that solar energy takes in order to deliver all the heat and light that reaches the Earth’s surface. However, the direct heat from the sun heats to only eight degrees Celsius. Earth absorbs the sun’s radiant heat while reflecting some of it back into the atmosphere, where it’s redirected to the Earth’s surface via the greenhouse effect.

This brings the surface temperature up to a comfortable, steady fifteen degrees Celsius. This greenhouse effect has kept Earth’s temperature stable for millions of years. The Atmosphere is composed of five layers: Magnetosphere, Ionosphere, Ozone layer, Stratosphere, Troposphere … each of which plays its role in protecting and nurturing Earth … the perfect cocoon for Life.

We walk barefoot on a beach, all the while feeling the lifegiving sun on our faces, and with each step we become aware that we could experience the full heat of two high-temperature sources above and below us.

Remember the weak force in chapter 1? Galacti tells us the sun’s core would not burn at fifteen million degrees Celsius without the weak force, which transmutes protons into neutrinos to produce deuterium, needed for the fiery interactions that fuel the sun giving daylight and heat with which Earth is drenched.

We can feel the temperature that is just right in the skinthin few dozens of meters of altitude we’re exploring. When daylight covers our location, wherever that may be in the “neighborhood,” we know that the fine-tuned arrangement of the atmosphere sends us the correct amount of sunlight to produce natural Vitamin D in our bodies, for example. “Vitamin D,” Galacti broadcasts planetwide.

“You just can’t get your minimum daily requirement on Mars or Jupiter, but you can on Earth. On those other planets, you’d need sunlamps even if you lived in a biosphere. Otherwise, you’d have low bone density, a weak immune system, and seasonal affective disorder (SAD).

On Earth, however, if you have sun exposure in moderation, you get your Vitamin D. Guaranteed.” “Thanks to the atmosphere,” I say when Galacti takes a break from his role as announcer.

“Yes, but the atmosphere is still a puzzle,” Galacti replies. He ascends. I follow.

This post is an excerpt from chapter 2.6 of Inventory of the Universe.

Since you read all the way to here… you liked it. Please use the Social Network links just below to share this information from The Explanation, Earth’s Atmosphere: Ingredients for Life