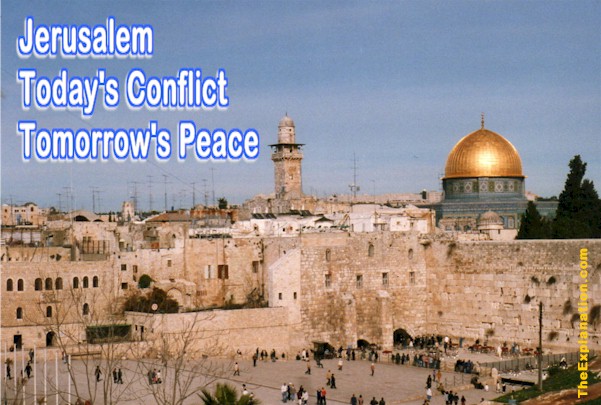 Jerusalem, torn by more wars than any other city, yet a symbol of peace. The story of a tormented capital with an inspiring and glorious future.

Jerusalem is the final fitting piece in this three-episode saga of the cities that marked Christ’s Ministry. Bethlehem, the city of bread, to feed, and war, the conflict of Christianity. Nazareth, the Branch of Abraham and David, Christ, righteousness personified, both God and man. Jerusalem, emblem of His humble Ministry 2000 years ago, theater and world capital of an unimaginable future scenario, impossible to understand, if it weren’t for Scripture.

The first time the Bible alludes to Jerusalem fittingly is with Abraham, the father of the faithful.

18 And Melchizedek king of Salem (early name of Jerusalem) brought forth bread and wine: and he was the priest of the most high God.

19 And he blessed him, and said, Blessed be Abram of the most high God, possessor of heaven and earth:

34 But I say to you, Swear not at all; neither by heaven; for it is God’s throne:

In the last episode, we saw Nazareth, netser, the Branch, girdled in righteousness – zedek (Isa. 11:5, H6663), none other than Jesus. Matthew, in the Beatitudes, quotes Jesus referring to the King of Jerusalem, none other than Himself. Jerusalem relates to Kingship and Righteousness, the meaning of the Biblical Hebrew Melchizedek. I leave you to deepen this exciting study.

5 Since the day that I brought forth my people out of the land of Egypt I chose no city among all the tribes of Israel to build an house in, that my name might be there; neither chose I any man to be a ruler over my people Israel:

6 But I have chosen Jerusalem, that my name might be there; and have chosen David to be over my people Israel.

The destinies of the trajectory from Egypt to Jerusalem, ruled by David and Jesus Christ, are all wrapped up in this physical preceding the spiritual purpose of God for humankind. This context in Chronicles is the resume of Matthew’s references to Old Testament prophecies. “Out of Egypt have I called my Son” (Matt. 2:15), “David the King” (Matt. 1:6), and the wise men arriving in Jerusalem (Matt. 2:1).

Note that everything here is GOD’S doing. God took His people out of Egypt, which symbolically represents the world of sin (Rev. 11:8). God chose the city of Jerusalem and the ruler David, of whom Christ is the son, at His given point in time. I hope you understand how all these pieces assemble to give us one clear puzzle picture.

The Explanation asks a unique question of its audience. This is the banner on the homepage.

As we move into 2022, world governments and leaders are shakier than ever. Wherever you look, politics and religion, supposedly the pillars of a stable society, are in shambles. Peace and prosperity seem to be on a downward trend. The answer to the above question is neither you nor I, nor any other human being can bring real, lasting peace and prosperity to this Earth.

The Bible, through the story of Bethlehem, Nazareth, and especially Jerusalem, reveals only God can take us out of Egypt, and establish King David in Jerusalem. This, of course, prefigures Christ’s First and Second Comings and the establishment of His City, Jerusalem, which will become New Jerusalem. Again, I leave you to deepen this Bible narrative.

Jerusalem, in one name, summarizes God’s entire purpose in bringing peace and prosperity. Use the Bible tools at UnlockBibleMeaning.com to dig out God’s answers.

Now it came to pass, when Adonizedek king of Jerusalem (H3389) had heard how Joshua had taken Ai, and had utterly destroyed it; as he had done to Jericho and her king, so he had done to Ai and her king; and how the inhabitants of Gibeon had made peace with Israel, and were among them;

Here’s the Biblical Hebrew for Jerusalem.

יְרוּשָׁלַ͏ִם Yᵉrûwshâlaim yer-oo-shaw-lah’-im; rarely יְרוּשָׁלַיִם; a dual (in allusion to its two main hills (the true pointing, at least of the former reading, seems to be that of H3390 (יְרוּשָׁלֵם))); probably from (the passive participle of) H3384 (יָרָה) and H7999 (שָׁלַם); founded peaceful; Jerushalaim or Jerushalem, the capital city of Palestine:

Who Teaches and Casts?

יָרָה yârâh yaw-raw’; or (2 Chronicles 26:15) יָרָא; a primitive root; properly, to flow as water (i.e. to rain); transitively, to lay or throw (especially an arrow, i.e. to shoot); figuratively, to point out (as if by aiming the finger), to teach:

Yara, Jeru, Christ possesses and accomplishes all those traits. I leave you to do an in-depth study of these various attributes. Find these qualities by studying the verses with these Biblical Hebrew words. Even their corresponding words in the New Testament. For instance, “I will make you fishers of men” (Matt. 4:19), qualified shooters and archers), “cast your nets” (Matt. 13:47, John 21:6) etc. Meditate on them, to build your faith in the One who is at work accomplishing His purpose on Earth.

1 But in the last days it shall come to pass, that the mountain of the house of the LORD shall be established in the top of the mountains, and it shall be exalted above the hills; and people shall flow to it.

2 And many nations shall come, and say, Come, and let us go up to the mountain of the LORD, and to the house of the God of Jacob; and he will teach (H3384) us of his ways, and we will walk in his paths: for the law (H8451) shall go forth of Zion, and the word of the LORD from Jerusalem.

Let’s look at the word law in Biblical Hebrew and learn the wonderment of this language and how it’s used to compose God’s Word.

To teach and the law have one and the same root! Teach is directly related to law. The Teacher, Christ, and what He teaches are integrated. The two great laws, love God and neighbor, “On these two commandments hang all the law and the prophets” (Matt. 22:37-40). In English, it is impossible to see this inseparableness, which causes such dissension regarding Christ’s teaching and the law.

At His Second Coming, Christ will teach the law from Jerusalem. That’s the יָרָה yârâh, the first part of the composite word Jerusalem. Now, look at the result.

3 And he shall judge among many people, and rebuke strong nations afar off; and they shall beat their swords into plowshares, and their spears into pruninghooks: nation shall not lift up a sword against nation, neither shall they learn war any more.

4 But they shall sit every man under his vine and under his fig tree; and none shall make them afraid: for the mouth of the LORD of hosts has spoken it.

Do you see the connection? Jeru leads to salem, to real peace! Imagine EVERY HUMAN owning a piece of property and enjoying their garden without fear and anxiety. That’s a long way from 2021 and 2022. But that’s what Jerusalem portrays.

The Only Way to Peace and Prosperity

שָׁלַם shâlam shaw-lam’; a primitive root; to be safe (in mind, body or estate); figuratively, to be (causatively, make) completed; by implication, to be friendly; by extension, to reciprocate (in various applications):

Remember, Key 7 is Biblical Hebrew words tell stories. Here’s the narrative of Jeru, the One qualified to teach humans God’s law, that leads to peace of body and mind. All the words in italics are parts of the one puzzle piece salem. They’re all the different and figurative meanings of the Biblical Hebrew. Only when you take them as a whole will you grasp the depth of meaning of this word.

God created humans perfectly to be at peace and prosperous. Humankind abandoned Him.

But it’s God’s purpose to make an end to human suffering and finish what He started.

God sent His Son Who performed His role to make amends, pay in full, make restitution so that humankind can be restored and rendered prosperous in body and mind.

God’s purpose will surely be performed leading to a reward of peace.

Jeru–salem is the Teacher of God’s ways, His laws of abundant life, that alone lead to peace, individual, national, and global well-being. It is the vision and goal of Bethlehem, feeding bread to the flock, Nazareth, the righteous Branch Who has always existed as God and came as the son of Abraham and David to come to teach and pay for our sins. He will return as the King of kings and establish worldwide peace. Here’s the reality of what the future holds.

3 And many people shall go and say, Come you, and let us go up to the mountain of the Lord , to the house of the God of Jacob; and he will teach (H3384) us of his ways, and we will walk in his paths: for out of Zion shall go forth the law (torah – H8451), and the word of the Lord from Jerusalem. (Sam: the teaching, like an arrow, will shoot out of Zion as the water flows from under the throne in Jerusalem to the four corners of the world)

4 And he shall judge among the nations, and shall rebuke many people: and they shall beat their swords into plowshares, and their spears into pruninghooks: nation shall not lift up sword against nation, neither shall they learn war any more. (Sam: full peace)

Check this episode for another aspect of salem. It represents Christ’s sacrifice, the ransom He paid to purchase us back from the death penalty inflicted by sin. This is the only way to have personal peace. This elaboration of the story the Biblical Hebrew word Jerusalem tells is but a resume. From the house of war (Beth Lechem) to the House of God, the Temple in Jeru-salem. God TEACHES the way to PEACE summarizes His entire purpose.

In 2022 and beyond, as we, unfortunately, see more turmoil mount around us, need to keep these principles front and center in our minds. Meditate and focus on these spiritual realities. God alone, the Author of our eternal salvation (Heb. 5:9), can bring you immediate, and ultimately the world, long-lasting peace, and prosperity.

Since you read all the way to here… you liked it. Please use the Social Network links just below to share this information from The Explanation, Jerusalem, City of Conflict and Peace. Fascinating Future