The Amazing Role of the Ruach, Spirit, in Living Beings. Part 1 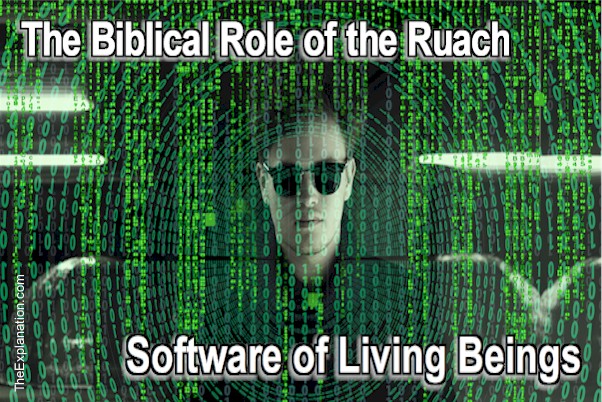 The role of the ruach, curiously, can be compared to the use of computer software. There are all types of software as with spirit.

All humans and all animals possess ruach (Eccl. 3:19 …all have one breath (ruach)). You can only understand why living beings are the way they are if you grasp the role of the ruach. This is essential and fundamental knowledge for psychology and spirituality.
(Mind-Body Problem Solved, Chapter 24 – Table of Contents)

God breathed neshama-consciousness into Adam’s nostrils; this is human awareness of their potential, their sensitivity to what they are; their five psychological characteristics that make them human, and the underlying basis of the mind; making them fundamentally different from animal-kind.

Coupled with the neshama comes the spirit in humans, the role of the ruach is a second spiritual component furnishing power and ability to grow mentally and skillfully; this is the mind-power enabling humans to learn, enact, and progress throughout their lives.

Today, we’re going to venture into the analogy of comparing the mind to computer software; this is risky, and I will lay down my rules for doing this. But first, why use the mind-software metaphor? Because humans have ruach AND animals have ruach. One could erroneously conclude that humans are animals, even if we often act that way. Today, science and psychology are pulling out all stops to show how animals have human characteristics and the continuity between the two.

The ground rules are humans are not animals, and animals are not humans. There are some similarities, granted, but humans are humans, and animals are animals, and never the twain shall meet. To quote Rudyard Kipling, “Oh, East is East, and West is West, and never the twain shall meet.” It is fundamental knowledge with Bible corroboration.

The Bible evidence reveals humans have neshama and animals don’t. This is the reason why in a competition humans would run off with all the Nobel prizes, but animals with all the Olympic medals.

Role of the ruach and software

The Bible tells us that two components of humans are both spiritual: neshama and ruach. In our analogy, both mind (consciousness & mind-power as a whole, neshama & ruach) AND software will be considered NON-material. In other words, we can consider them as NOT being an intrinsic part of the computer which is hardware; without software, it’s like the inert dust of Adam’s body AND brain before God breathed the neshama into it (Gen. 2:7).

Likewise, with animals! They have a body and brain PLUS something that confers on each fauna species its characteristics and within each species, individual characteristics. What makes some dogs droop their head and put their tail between their hind legs when scolded? They know they’ve done wrong and show it. How can a dog act that way?

Here’s the definition of software: the intangible part of a computer.  We shall see different types of software.

Various Biblical verses corroborate this concept; here’s one. James 2:26 says the body without the spirit is dead. If the spirit is absent, the device won’t run. The human spirit runs the human brain just as animal instinct runs animal brains.

Now, we need to talk a little about how software works with computers and devices. I’m going to use the first sentences from Wikipedia. Please take the time to grasp this.

The first level of software (combining BIOS and firmware) is the most basic, and it is always pre-installed. Another way of putting this is embedded; this is software that is specific to only one type of device. Firmware is everywhere: telephones, robots, appliances like microwaves, cookware, toys, pacemakers, security systems, televisions, and digital watches. It can get very sophisticated like for the International Space station or sending humans to Mars.

An unfortunate example of firmware is the Boeing 737 MAX. The Maneuvering Characteristics Augmentation System (MCAS) is firmware explicitly designed to handle the aircraft at slow speeds by controlling its angle (up, down), or direction. Because this firmware is probably faulty, authorities grounded these planes, and the company will rewrite the software.

The unique characteristic of firmware is that each software is specific to one device. MCAS is only for the maneuverability of aircraft. Pacemaker firmware will not work in your television and vice versa.

That’s precisely the way animal instinct works. Instinct is distinct for each animal, and it is not interchangeable. As each device has software specific to its hardware, so each animal has instincts specific to its brain and body.

38 But God gives it a body as it has pleased him, and to every seed his own body.

39 All flesh is not the same flesh: but there is one kind of flesh of men, another flesh of beasts, another of fishes, and another of birds.

Likewise, there’s different firmware, and different instincts for each species, and sub-species. God created this instinct; this is the specific firmware, the role of the ruach for each particular animal, He embedded in every individual type of fish, fowl, and animal. This is God’s hand, His magnificent design on nature. This is the meaning of Romans 1:20 “For the invisible things (Sam: the role of the ruach) of him [God] from the creation of the world are clearly seen, being understood by the things that are made, (Sam: the animals, their instinct and habits correspond to the functioning of their bodies. Perfect correlation) even his eternal power and Godhead; so that they are without excuse.”

Biologists are amazed at the bodies and instincts of specific animals. Just like you and I are surprised at a vacuum robot that automatically goes across every inch of a floor picking up the dirt and then heading back to its home station, empties the garbage, and recharges. The firmware perfectly matches the animal or device it guides and animates. God created each instinct the same way programmers create each distinct firmware.

This instinct, similar to the firmware, cannot be modified. You might be able to enhance it a little by paying for an upgrade, but the ability and capacity of that firmware are limited to a specific device. Identical with instinct. Animals have a little leeway, You can train a lion, dolphin, or chimp to do a few tricks, and upgrade its instinct, so to speak. But, at a given point, you hit a brick wall, and the animal will not respond to any enhancement. Firmware has limited adaptability. Animals have ruach, they have a set embedded instinct. innate ability, designed for them to accomplish incredible feats,  but beyond that, there is no or minimal variation.

We need to take the time here to differentiate between prehistoric beings and humans. The Explanation cannot refer to them as prehistoric The Bible states that Adam was the first man, the first human. Adam and Eve are the parents of ALL humans.

The first man is of the earth, earthy: the second man is the Lord from heaven.

And Adam called his wife’s name Eve; because she was the mother of all living.

The Explanation considers this correct; the is the story of humans and prehistory on Earth is not the subject. However, paleontologists have discovered prehistoric beings, including erectus, habilis, neanderthal, and dinosaurs that need a clear explanation. These creatures existed BEFORE the creation of our world (starting with let there be light in Gen 1:3) and Adam and Eve (Gen 2.7 and onward).

We have to be very careful with our use of paleontological terms. For instance, homo is Latin for human and, homo sapiens (wise) refers to modern humans.  However, homo erectus, homo habilis, and all the other homos are misnomers. We cannot call prehistoric beings homo, humans. Modern humankind ALONE is in the genus Homo if we want to use that classification.

Since Adam and Eve and their descendants are humans, what were Erectus, Habilis, Neanderthal, and all the other similar species? They were beings with more complex firmware. Just like animals, the role of the ruach of prehistoric beings was more developed, as seen by their accomplishments. It is probable, but I have not studied this, that successive prehistoric beings had more and more developed ruach (firmware, software).

We have evidence that through the role of the ruach they could manufacture rudimentary tools, bury their dead, and live in communities. As advanced and as impressive as these accomplishments may be, this is not what qualifies them as humans (the next chapter explains humans). Watch the Ted Talk below to see that Genevieve von Petzinger, in her thorough study of cave art throughout Europe, found only 32 symbols. With that in mind, as intricate as it may be, can you present prehistoric cave art as human? It is undoubtedly more advanced, because of the role of the ruach, than any animal species could accomplish. But, it is a very far cry from what defines humans.

In light of the Bible telling us Adam was the first (hu)man, I submit to you that all prehistoric beings were not human. They had specific body characteristics of humans, that are undeniable, but mentally, they were far, far short of the human mind. The Explanation is the role of the ruach was more developed with firmware explicitly designed for them, giving them more capacity than animals. They were indeed on a level above their surroundings, but with only 32 symbols over thousands of years, they were incapable of going beyond their embedded firmware, the limits of the role of their ruach.

Next week we will see how the software operating systems and programs, neshama, AND the role of the ruach define humans.

Since you read all the way to here… you liked it. Please use the Social Network links just below to share this information from The Explanation, The Amazing Role of the Ruach, Spirit, in Living Beings. Part 1