The Space Race: Weapons or Manufacturing–Which will Win?

The Space Race isn’t which country will win the war, but for humankind’s sake, will peaceful or belligerent pursuits win out?

The Space Race isn’t which country will win the war, but for humankind’s sake, will peaceful or belligerent pursuits win out?

It’s a space race. We are using Space in unique ways, namely to produce goods necessary for human activity such as top-quality semiconductor chips for computers. Also, protein crystals that can help deliver pharmaceuticals, contact lenses, and aerogels—the lightest solid material known, yet able to support the weight of a compact car—that we use in foam insulation for household windows.
(Audit of the Universe chapter 1.6)

Take the example of contact lenses. Optical manufacturing companies and space agencies have conducted experiments to expose contact lens materials such as fluorine, silicon, and acrylic (fluoro-silicone/acrylate) to the microgravity of Space in pressurized research labs in the Space Shuttle.

The lenses formed under these conditions have proved to be more permeable to gases, thus allowing more oxygen to reach the eyes. Also, these space-manufactured gas-permeable contact lenses are less likely to attract bacteria, preventing eye infections.

Our next story, Galacti says, is epic. It concerns the battle to control the ‘ultimate high ground’—It’s the space race.

A bit of history: Before June 20, 1944, nothing human-made had ever entered this off-limits environment that engulfs Earth. But World War II and the German V-2 rockets developed by Wernher von Braun shattered Space, reaching altitudes up to 200 km, about 100 km into Space. The ‘V’ stands for Vergeltungswaffe, German for retaliatory or reprisal weapons launched against the British.

The story of the weapons space race begins with a personal anecdote for me. My mother described the German terror bombing during World War II, how Londoners could hear the roaring engines of the V-2’s arriving over London, and suddenly they’d cease. Moments of anguishing silence as they fell out of the sky, landing, nobody knew where, exploding into destruction and indiscriminate death of 7,183 people in England and Belgium.

Paradoxically manufacturing these first space-age weapons took more lives, about 25,000, amongst the forced laborers from the SS concentration camp Dora (Mittelbau KZ). When Wernher von Braun defected to the US, he created a version of the V-2, which became an intermediate-range ballistic missile. However, the scope of this argument goes beyond the World War II-era conflicts–the story of weapons is much broader.

If we think about weapons, we see a progression: hand combat > dagger, sword, spear (pierce, throw, but need personal contact) > slingshot (trying to hit the enemy from further away) > catapult > gunpowder > guns. Their evolution includes sniper (distance), machine gun (fire-power) > cannon (guns of Navarone and the V-3’s which had a range up to 165 km—that’s unbelievable). And even more powerful: atom bomb > missiles > SCUD guided missiles from the Iraq War that fly at ground level following the topography to their target > ICBMs > Missiles from Space. The space race is on.

Galacti brings up a quote:

No superpower has ever decided to become weaker.

The story of space race in weapons also includes international attempts to restrict or ban them, such as the Outer Space Treaty of 1967, signed by one hundred nations from Afghanistan to the United States, and the Space Code proposed by the European Union in 2012.

The Outer Space Treaty, designed as a nonarmament treaty based on concerns about the space race even before Russia’s launch of Sputnik, is, according to our digital library of the universe, ‘an undertaking not to place in orbit around the Earth, install on the moon or any other celestial body, or otherwise station in outer space, nuclear or any other weapons of mass destruction.’ It ‘limits the use of the moon and other celestial bodies exclusively to peaceful purposes.’

However, despite international agreements, the ‘space race’ has continued between the United States and Russia, two proponents of the treaty, as well as other players seeking this ultimate high ground.

The USA has destroyed a satellite with a missile; China pulverized its own target satellite as well as a medium-range ballistic missile in Space. India is developing a ‘hit-to-kill’ anti-satellite system.

Space is vast, so we think. Why should we worry? International peace workers in many countries believe that we have reason to be worried. Worse, if nations continue to rattle space sabers and destroy satellites, we could cripple our world as we know it. Disruption of communication networks and television signals, financial systems wiped out, air traffic controls dismantled, and aircrafts lost—a real disaster scenario. 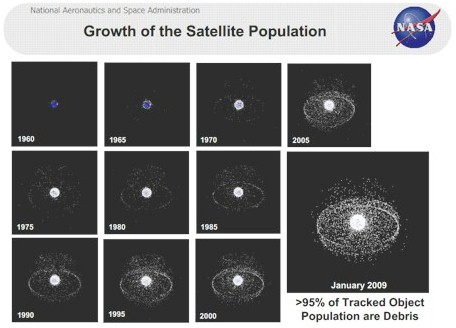 More than 95% of tracked Space Objects are made up of debris.

Space, unlike any other territory in our generation, clearly reveals a before and after status of the intervention of humankind and our effect on Space. We discussed space debris in the last blog post. The above image reveals the state of affairs in 1960 (pristine clean) compared with 2009. In just 50 short years, there is an absolute reality of positive and negative.

Space has gone from spotless to soiled, from virgin to adulterated. The unclouded evidence in its transformation should cause humankind to reflect on its behavior.

Space has gone from spotless to soiled, from virgin to adulterated in just 50 years. Click To Tweet

Have we measured the consequences, the rewards, and penalties? Where will we be in ten or twenty years? Are we making decisions and taking steps to stave off this gnawing situation?  Is the glass of peace and prosperity getting fuller or emptier? What is the tendency for humankind?

This blog post is an excerpt from chapter 1.6 of Audit of the Universe.

Since you read all the way to here… you liked it. Please use the Social Network links just below to share this information from The Explanation, The Space Race: Weapons or Manufacturing–Which will Win?