Satellites have got their Surveillance Eyes on Earth and Us 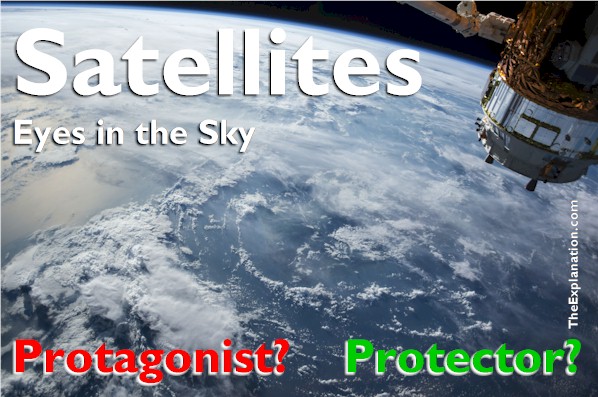 Thousands of satellites pepper space like eyes in the sky. They survey and scrutinize, some say, spy on just about everything that takes place on Earth.

Thousands of satellites–eyes in the sky–pepper space They survey and scrutinize Earth: Protagonists? Or Protectors?

What about the four cardinal points, and how ancient monuments and megaliths seemingly mirror the position of the heavens? Galacti says as he transports the ancient Irish temple New Grange into the landscape, and next transports Stonehenge several feet away—along the ley lines.
(Audit of the Universe chapter 1.3)

In the new area of archaeological study known as geodesy, Ley Lines hypothetically link ancient monuments and megaliths; this fits with the tradition, in many societies, of building points of use according to straight lines.

Think of the Ley Lines as train tracks or a city planned on a grid. The builders of ancient pyramids in Mexico appear to have designed their structures as if on an axis. For example: Suppose Stonehenge or La Grange or the Pyramid of Kulkulkan in Chichen Itza in Mexico are the nexus of electrical, magnetic, ‘mystical’ or psychic energy—or landmarks for UFOs to steer by for navigation.

Skeptics and believers put equal faith in disproving or advancing this idea.

Just as you rarely think of ancient navigation aids, you probably don’t think of the role the stars still play in navigation today, in a way.

Consider that a handful of countries can now blast powerful rockets loaded with satellites into space. A lot of them are in a geo-stationery orbit around Earth. At an altitude of 36,000 km, they revolve at the same speed as Earth, and hence always stay in the same position. Three such satellites can have communications beamed up to and then between them, thus permitting round the world instantaneous verbal, TV, video, web exchanges. It’s brilliant, out of this world.

Just as if you go to the top of a 50-floor skyscraper, you can see further in the distance than if you were on the ground, so, too, with 120 satellites in the Earth’s orbit, every square inch of Earth can be seen and watched. It’s possible to capture the number on a car’s license plate as well as monitor military movements, missile launchings, and even self-defense.

Hundreds of other uses like weather forecasting, measuring the height of mountains, the size and topographical changes of the polar caps, and the search for precious elements like lithium for long-life batteries. Today, thousands of specialized satellites revolve incessantly around in this void, gathering and transmitting unimaginable amounts of data earthward. But what exactly is that data telling us?

We can view, with the naked eye, one of the global positioning satellites allowing us to pinpoint our location. There are 24 GPS satellites in orbit, creating a human-made GPS constellation.

Although we’ve been traveling using the ‘Galacti Positioning System,’ we’re aware of GPS technology during our journey because of our cameras, smartphones, and iPads—all of which use GPS technology. Consider that we can speak into our cell phones, or go to a virtual map and search for whatever it is we want to find—a café au lait, a computer shop, or a planetarium.

Satellites are also conduits for television, radio, cell phones, atmospheric and weather information, and tools to gather and send scientific knowledge, such as data on cosmic X-rays, gamma rays, and electromagnetic radiation back to science centers all over the world.

Then we come to the fun part: the images of stars and planets, light spectra, measurements, count rates, and other figures describing Mercury, for example. Fortunately for scientists, the majority of data the satellites transmit is for our weather stations. Scientists have two options here: They can wait for a fresh batch of data every orbit or receive the data streamed to them live in realtime.

However, Galacti notes that the data is only as good as the instruments used. Hence, it is worth paying attention to the housekeeping data to make sure the devices have the proper calibration. Seeing new dwarf stars, new space phenomena, trying to understand the Big Bang, prompt us to reach farther, to launch the Mars Rovers.

The result of all this satellite technology?

Without being aware of it, we use space as a medium every day. When we connect to the Internet or make a cell phone call or check the weather before we leave for work or play, we’re using satellite signals crisscrossing above the exosphere. Space is not just an idea; space is part of our everyday lives–when we look to the heavens and wonder, we also forget that we are using ‘outer space’ to accomplish tasks we all take for granted, with the same confidence with which we have accepted putting a man on the moon.

Also, via satellite, we can locate sub-surface resources such as underground water. India has launched remote sensing satellites that help to create maps of underground water to identify locations for drilling wells. 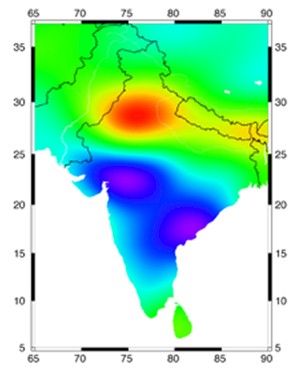 Additionally, international space agencies have put satellites in orbit to track the groundwater disappearing beneath the farmlands of northern India, between Jaipur and Delhi, a stretch of 270 km (170 miles), about the distance between London and Liverpool.

Data from NASA’s GRACE Project collected between 2002-2008 reveals that the groundwater in Northern India is being used to irrigate crops at a faster rate than the water cycle can replenish the underground aquifers. The naked eye cannot detect changes in water levels, but twin satellites can measure how much groundwater is withdrawn from the Earth–one foot per year for the last several years.

By measuring changes in the gravitational field between the two satellites, changes recorded by a ranging microwave system, and analyzing data recorded by the satellites’ instrumentation, the scientific team can create a map of groundwater gains and losses. The diagram above shows a red alert spot in northern India. By diagnosing the problem, scientists can help the Indian government conserve water—a positive development to be sure!

Satellites ‘see’ and record everything–do they see too much?

Imagine international satellites scanning your phone conversations for ‘keywords’ connected to global terrorism. You may make a joke and say something in all innocence, ignorant of the consequences. Meanwhile, a computer is flagging those words as the satellite transfers the data at lightning speed into a detection-analysis computer program.

Yes, this keeps us safe from global crime and terrorism. While some think it is necessary, other members of our group have concerns about their private conversations being monitored in this way by a sophisticated computer system connected to data-gathering and defense satellites.

And how about cameras in communities such as Glasgow, Scotland, the safest community in the UK, yet the use of public surveillance cameras are on the rise (408 cameras compared to 326 in my home city of Paris), what is the purpose? Do surveillance cameras contribute to public safety? How about London, where crime rates have not lowered since the 1980s, yet according to reports, the average citizen in London appears on camera 300 times per day?

We can debate the efficacy of surveillance systems, that’s one of those glass-half-full or glass-half-empty questions, yet as Galacti says, many people worry about their privacy. In contrast, others think, ‘If you’ve done nothing wrong, then you have nothing to worry about.’

This blog post is an excerpt from chapter 1.3 of Audit of the Universe

Since you read all the way to here… you liked it. Please use the Social Network links just below to share this information from The Explanation, Satellites have got their Surveillance Eyes on Earth and Us