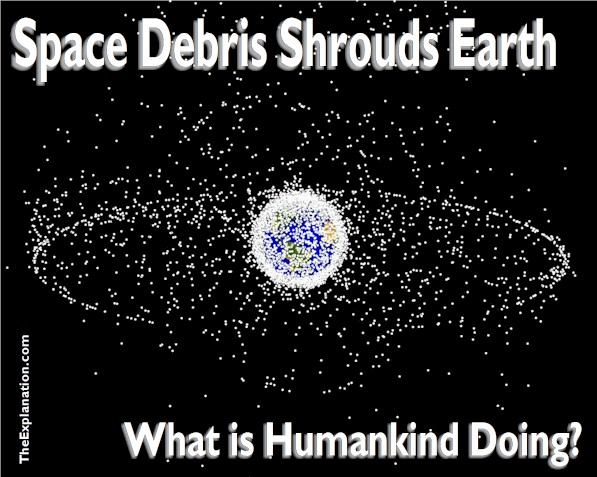 Space, beyond Earth’s atmosphere, the vastest, pristine domain–or is it? Space debris is accumulating at an alarming rate.

Down here on Earth, peering up into the vast sky, gazing at the stars, planets, and galaxies makes us realize just how magnificent and majestic outer Space is. However, the naked eye can’t see the 1400 km thick sphere enveloping our planet just beyond Earth’s atmosphere where a Formula 1 race of out-of-control space debris with no pit stops and no rules whirls around day in day out.
(Audit of the Universe, chapter 1.5)

“Please deposit all trash into the recycle bins,” Galacti announces. “We can’t take the chance that microbes from your coffee cups or the crusts of bread from your plate might leak out into Space. As it is, the International Space Station crew tossed out plastic bags of solid waste, and they had quite a disposal problem when their plumbing broke. They also lost a tool bag while working outside the space station, but they weren’t able to track it.”

Many objects, including some costly ones, have drifted out of our ‘view’ in Space. Earth’s radar dishes have been pointed at orbits around Mercury, for example, where space shuttles have voyaged—but space shuttles and satellites do go missing, as opposed to being in stealth mode (more on that in a moment).

How can a space shuttle just wander away if we have shuttle-tracking radar dishes aimed at the orbits around Mercury? Galacti notes it’s not possible to monitor every orbit with radar dishes, and that satellites and spacecraft missions periodically malfunction and go ‘missing’ before ground crews detect that there is anything wrong. More space debris.

Some of those missions also end up smashed on the Moon, strewn here and there across the flat moonscape. Granted, you can have satellites merrily orbiting the Moon for a century or, as mentioned, sustaining our cell phone signals.

It seems beyond belief that we would ‘lose’ something so complex as a non-reusable Russian space shuttle or a reusable U.S. space shuttle, both of which cost, on average, $10,000 per pound ($22,000 per kilogram).

Space satellites, stray pieces from the early days of the space shuttle, and even future space missions to explore asteroids threaten to clutter the skies. Satellite-satellite collisions generate space junk that could circle Earth and threaten other satellites for the next 10,000 years.

What goes up doesn’t necessarily come down–not from Space. Would you believe that there’s a “junkyard” of thousands of pieces of scrap floating around? So much so that new launchings and satellite placement have to take into account what’s in the vicinity– it’s an expensive traffic jam. Mission planners have to calculate orbits around the poles and the equator carefully, as the smallest change, for example, a piece of space debris striking a satellite, can alter the orbit or even collide and destroy it.

We are far from the point where the ‘traffic’ in Space resembles the traffic in Jakarta, Indonesia, but it is a concern now and into the future. It’s hard enough to believe we can pollute the enormous amounts of water in the oceans worldwide. Now we have to get our minds around the pollution of the infinitely more vastness of Space around planet Earth.

We are, incidentally, also polluting the skies with cell phone signals that block part of the spectrum of radio wavelengths astronomers, such as the scientists at the Arecibo Observatory, use to look at the cosmos. We look at our cell phones and wonder what we are doing to the universe. What other clutter are we responsible for, and what are we losing?

Scientific estimates indicate there are more than 670,000 debris 1–10 cm, and around 29,000 larger pieces of trackable space debris that can reach 8 ton defunct satellites the size of a bus, speeding around Earth in various orbits. 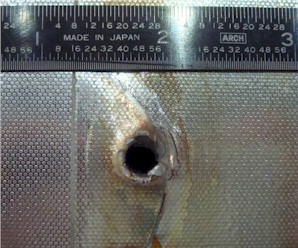 These are mainly in Low Earth Orbit (LEO), between altitudes of 160 and 2000 km, where all human-crewed space flights (except trips to the Moon) have taken place. As well as the Geostationary Earth Orbit (GEO), at 36,000 km where weather and communication satellites hover above one spot in synchronized rotation with the Earth transmitting information from their focal area.

The image reveals the entry hole created on Space Shuttle Endeavour’s radiator panel by the impact of unknown space debris.

But the real collision risk comes from an estimated untrackable 170 million debris smaller than 1 cm (0.4 in). This flying flotsam is highly dangerous, not only because of its destructive nature but, as Galacti points out, it may have already reached critical density.

This point is when launching and collisions create more space debris–than what is being removed by natural forces like falling out of orbit and being burnt up in the atmosphere. This starts a chain reaction of pulverizing more and more space debris.

Small objects such as particles of paint don’t leave a significant impact, but, like a piece of gravel cracking your windshield as you drive, they deteriorate highly polished lenses and solar panels. Another factor is speed; this space debris is traveling at Mach 9, nine times the speed of sound, and can make shreds out of a satellite. Hypervelocity impacts cause metals to act like fluids, and extreme hypervelocity vaporizes both impactor and target.

We’ve harnessed the confines of Space for man’s necessities, to communicate more and faster, to get better forecasts, to scrutinize the globe for natural resources–and in so doing to what extent are we emptying a full glass?

This blog post is an excerpt from chapter 1.5 of Audit of the Universe.

Since you read all the way to here… you liked it. Please use the Social Network links just below to share this information from The Explanation, Space Debris, Humankind has Managed to Pollute Earth’s Space