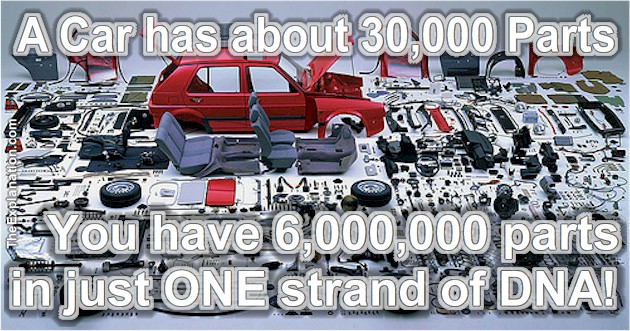 Only four Nucleotides but billions of their combinations make your DNA the individual you are. Every human being has these identical nucleotides – yet we’re all so different. Galacti leads us to lab displays that beckon us to study them. We move to a presentation that, at first, seems to be some sort of secret code: hundreds of combinations involving only four letters—T, A, G, and C.
(chapter 7.4-5) Our DNA is composed of billions of base pairs of only four different nucleotides A, C, G, and T. It is the sequence of of these 4 elements that makes each of us individuals.

As we watch an adjoining display, a familiar ladderlike spiral structure appears: the DNA molecule, the code for our lives, passed on to us by our parents.

While we all have heard of DNA in science books, in detective shows, through the Human Genome Project, and in the doctor’s office, we may not have had the opportunity to study it up close and appreciate its structure.

DNA, or deoxyribonucleic acid, is a double helix of nucleotides, each containing the crucial elements carbon and nitrogen. Remember the base pair letters A, T, C, and G that we referred to?

Weak hydrogen bonds (like hyphens) combine these letters in specific combinations: guanine (G) with cytosine (C) and thymine (T) with adenine (A). G and A, we learn, are the purine molecules from the previous section now moving on to their next sequence. Double-helix DNA showing how each of the nucleotides is attached to the outside backbone while also being able to disassociate in the middle for reproduction purposes.

We observe the elegance of a double helix of a DNA molecule winding in front of our eyes, and for our edification the letters A, T, C, and G are highlighted.

The length of the DNA chain or human genome is over three billion base pairs, each half attached to a sugar phosphate backbone.

Think about the sheer coordination of atoms with weak bonds in the middle and solid bonds on the spiraling rim that creates one of the molecules of life.

Think about the sheer coordination of over six billion nucleotides that form just one strand of DNA. Click To Tweet

As a result of the coordination, DNA achieves its two purposes: to store the genetic library of information and to produce, from that library, life elements called amino acids.

In a computer simulation, we see combinations of nitrogen, hydrogen, carbon, oxygen, and numerous other atoms that make up our body. When bonded together, these molecules form about five hundred chains called amino acids, of which only twenty are the building blocks of proteins.

Why only that many? Why those specific ones? As a starting point, we have heard that certain amino acids contribute to emotional well-being and also cause that sleepiness we feel after we eat a festive meal.

A well-known example is tryptophan, an ‘essential’ amino acid we obtain through our diet because the body doesn’t synthesize it. Another example is glutamic acid, this is nonessential—the body does synthesize this amino acid—which acts as a neurotransmitter and is important in learning and memory. The result of nucleotides.

However, we haven’t given much thought to amino acids and the important role they play in human life. We watch as N, H, C, and O join forces via complex pathways to create cysteine, serine, histidine, tyrosine, glycine, and the hundreds of amino acids that our body needs for specific functions.

Remember that the glycine molecule helped form adenine and guanine. We now find it being developed by the very same item it is part of; thus, we see a fully functioning cycle.

How can the glycine molecule, needed to synthesize #DNA, be developed by the very same molecule it is part of? Click To Tweet

Another way of expressing this virtual circle of nucleotides is to remember that these amino acids combine, creating mosaics of different proteins for which the information or translation keys to their sequences are found in the nucleotide base pairs that form the genes, the chromosomes, and ultimately the DNA strands. As suggested in previous sections, the proteins are the means by which their very own amino acids are formed, so you can’t have one without the other.

#Proteins are the means by which their very own amino acids are formed, so you can’t have one without the other. Click To Tweet

To make matters more convoluted, DNA is only the recipe book; by itself it can’t produce amino acids or proteins. To continue the analogy, simply opening a cookbook won’t produce a finished cake, just as the specifications for an automobile, on their own, won’t assemble thirty thousand parts into a car.

There has to be a way to interpret “1/4 cup nuts, chopped” or the precise instructions for wiring spark plugs. Similarly, something has to interpret which amino acid is being coded. To make a full circle of amino acid production, protein synthesis, and ultimate DNA reproduction, there are three steps: transcription, translation, and protein folding.

This post is an excerpt from chapter 7.4-5 of Inventory of the Universe.

Below is a clear video with a nice basic explanation of how nucleotides are formed and lead to strands of DNA. Very instructive, a must watch to see how the human body is built on the ‘simple’ but gets very complex.

Since you read all the way to here… you liked it. Please use the Social Network links just below to share this information from The Explanation, Nucleotides and DNA – Millions of Parts Assembled Perfectly