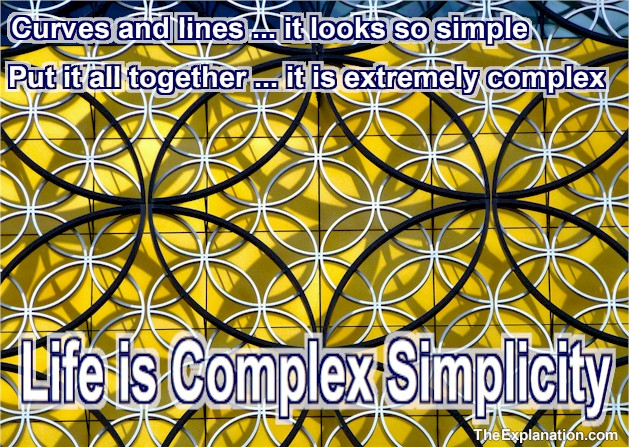 Life Is Complex Simplicity. That multitude upon multitude of  ‘simple’ equations adds up to extreme complexity. Even science doesn’t understand it. Curves and lines … it looks simple. Put it all together … it is extremely complex. Life is complex simplicity.

The virtual circle which arcs from basic elements to DNA and back again, involves just the five key atom elements we spoke of—C, O, H, N, and P—and an estimated fifty-five others; moreover, the secret is in the way those elements are put together!
(Inventory of the Universe, chapter 7.2-3)

It’s not easy to unravel the factory processes—note the emphasis on that last word—that take place simultaneously and successively to bring what we’ll call “just in time” (JIT) results.

To an uninitiated person, attempts to explain the life-giving concepts quickly get into complex terminology and explanations.

Here’s an example: The simple definition of what a gene is has become very multifaceted over the last ten years. Just go to Genome TV on the Internet and listen to the specialists describe its physiognomy. It’s no longer a simplistic section of a chromosome that explains why you have the color eyes, hair, and skin that you do; it’s much more.

We’ve come to realize that the so-called 98.5 percent of junk DNA actually has editing, splicing, and even cognitive features, in the sense that they code genes to form certain functions as they’re needed.

We recognize that DNA has a top-down approach to transmitting information that orchestrates the notes of the biological chef d’oeuvre in distinctive unique directions. This is where chronobiology is witnessed at its supreme. What do I mean by that? Think of DNA as having internal clocks, each set to the life cycle equivalent of what time it is in Paris, Rome, New York, Hong Kong, or Tokyo.

These timers help juggle the millions of elements in a DNA chain, with instantaneous and meticulous exactitude, to produce various types of RNA that in turn combine the amino acids into the lengthy folded proteins that are propelled to the four corners of your body to keep life running.

“So what I hear you saying is that the processes of life are also like a giant kitchen with lots of timers to keep everything on schedule,” Galacti says.

In a really simplified linear representation of life processes, this is how it might look:

But in reality it is anything but that simple; it can’t be presented in a linear fashion. Our disturbing question comes up time and again: which came first? For instance, proteins produce amino acids while already having amino acids as part of their own structure.

In a flowchart or organizational chart, which do you put first? Generally, you’ll find amino acids first because they’re less complex than proteins, but that’s only a small part of the story.

“Sam,” Galacti interjects, “you’re presenting life processes in a linear fashion, but we have to understand that they’re all simultaneously interlaced. I might add that if we remove any part of a life-giving process or the process itself, the chain breaks down.”

Let’s start by building a basic molecule, a group of atoms, called a purine, which is the basis of both adenine and guanine, two of the four bases in DNA.

“Sam, you’re losing your readers on this one,” interrupts Galacti.

“I know, and in one sense that’s why I’m doing it. This is fundamental biological chemistry, and the point I’m trying to make here is that, even beginning with the simplest of atoms, life is hypercomplex. If readers want to study this subject further, why not? My intention here is not to give a chemistry lesson but to show just a few steps to acquire the very first molecules necessary for the life process.”

“Okay, I guess you know what you’re doing. Go on.” A purine molecule, one of the basic components of DNA, composed of carbon and nitrogen, that has been formed by various complex pathways.

Above is an image of a purine, a ring composed of nitrogen (N) and carbon (C). These two building blocks of this molecule join together from five separate sources: aspartic acid, formate, glutamine, glycine, and HCO3 (bicarbonate).

There are various processes by which, firstly, each of these sources obtains its atoms and then, secondly, contributes them to the purine. This is known as biosynthesis, and each of the multiple processes is called a pathway.

For instance, several pathways can lead to the formation of the glycine molecule (C2H5NO2), which, as we see in the diagram above, in turn contributes N and C-C to the purine molecule. Molecules can obtain these atoms by synthesis—building from scratch (which involves other various processes)—or by metabolism, breaking down an existing molecule (yet other processes).

This building up and breaking down, this exchange of atoms between molecules is going on nonstop and millions of times per second, even as you read these words. That’s life, as we say.

My point in using this example is not the chemistry, which even scientists have enough trouble unraveling. Instead, it is the complexity to produce just one of the billions of molecules in our bodies each and every day of our lives.

“Most people don’t think about purines, but they’re everywhere in the human body,” Galacti says.

This post is an excerpt from chapter 7.2-3 of Inventory of the Universe.

Below is a video about complexity and simplicity.

Since you read all the way to here… you liked it. Please use the Social Network links just below to share this information from The Explanation, Life is Complex Simplicity – Perfectly Interlaced