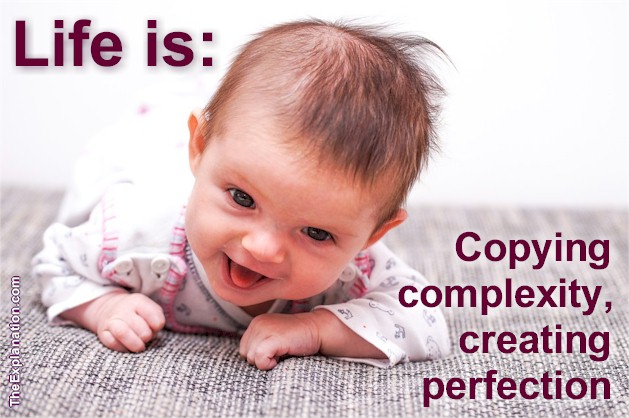 Protein Transcription and Translation … No, we’re not Writing a Book, we’re revealing the ultra-simple yet highly sophisticated way Proteins are built. The display below shows our DNA double helix separating into its twin nucleotide strands. One of the DNA strands acts as a template as its nucleotides pair with the precise sequence of RNA nucleotides or ribonucleotides, supplied by the cell nucleus factory with Just In Time (JIT) delivery to produce the aligned base pairs of adenine, uracil, cytosine, and guanine.
(Inventory of the Universe, chapter 7.6-7)

Just in time (JIT) delivery of millions of amino acids to copy complexity and create a baby, a living being Click To Tweet DNA splitting down the middle, into two strands, one of which will serve as the template for production of a ‘piece of RNA’.

JIT delivery is not the only incredible phenomenon that is taking place. Notice that Uracil (U) has replaced Thiamine (T), and there’s a further paring down during the transcription as introns—extra sections on the RNA strand that are unused in the coding of the protein—are removed and the remaining coding segments, called exons, are spliced together.

Severing and splicing of introns and exons exactly during DNA transcription is copying complexity and creating perfection ... new life. Click To Tweet

Chunks of RNA, called introns, are cut out and the remaining exons are spliced together… so that only what is needed for transcription is used.

Finally, what we’ll call GO and STOP nucleotides, specific sequences located at the beginning and end of the RNA sequence, decide the layout of the template strand.

GO and STOP tell the RNA enzymes that the DNA information has been transferred or transcribed—think of transcribing the notes of a conversation for a book—into the RNA, so that the RNA primary transcript is released and is now known as mRNA or messenger RNA.

Galacti shakes his head. “Wow, all that just to start the protein assembly.”

“Yes, and there are plenty of other JIT deliveries to come.” This messenger RNA now contains its own genetic information but is unstable in terms of storing it long-term, so it must transmit the genetic DNA material to proteins in the second step.

The mRNA, a long, slender carrier of the instructions, leaves the cell nucleus and enters the cytoplasm, the gel-like substance inside the cell where all its organelles are found.

Galacti points to other molecules that have just arrived: tRNA (transfer RNA) with their cloverleaf design and specific triplet bases, which were also transcribed from the DNA following singular pathways. We watch as each one “loads” an amino acid. “Do you know where the amino acids come from?” asks Galacti.

“Various sources. They can come from our food digested (metabolized) into amino acids that join the pool of amino acids in our bloodstream, or these amino acids can be built from scratch, from simpler molecules, by other processes.”

The amino acids are transported by specialized protein from the nucleus or via the blood and enter through the cell’s membrane, but they’re here JIT to be bonded to their one and only—out of twenty—corresponding tRNA for this lifelong supply chain of protein synthesis.

Delivering the exact amino acid Just In Time to build a chain of protein is another uncanny process during DNA translation: copying complexity to create life. Click To Tweet

The 2013 Nobel Prize for medicine was awarded to three scientists for bringing to light the mechanism for JIT delivery at the right address of molecules traveling into, out of, and within a cell, like the crowded, tangled streets of a major city during rush hour.

Scientists have discovered that simultaneous to this delivery, a tiny granular engine called a ribosome binds to the mRNA and reads the recipe for the protein: a sequence of hundreds or thousands of amino acids. The ‘factory’ chain line production as a ribosome moves along a strand of mRNA to bring all the amino acids together for a particular protein.

As the ribosome moves along the mRNA, it’s alerted to each three-nucleotide sequence—called a codon—and binds the corresponding tRNA anticodon with its triplet code into its correct position. The tRNA breaks the bond with the amino acid, releasing it to join with the previous amino acid.

Subsequently, it vacates its position as the next tRNA arrives to release its amino acid and so on, building the protein chain with peptide bonds. Both the tRNA and the ribosomes have inherent proofreading mechanisms to keep errors to a minimum.

Once the end codon is read, protein synthesis ends, and voilà. We see before us, labeled by Galacti, a digestive enzyme, which is released for the next step.

We think about how smooth the process seems and how twenty different amino acids, depending on their number and sequence, can combine to create an estimated two million different kinds of protein in our body in this way, based on the original instructions in DNA.

Your body's copying complexity capabilities are creating billions of proteins to sustain all your life processes 24/7/365 and you're not even aware of it. Click To Tweet

Just as the Human Genome Project mapped the entire composition of DNA, another major biology breakthrough is the Human Proteome Project, which aims to complete knowledge of the human proteome or map at the tissue level of all the proteins to reveal, as they put it, “which proteins are present in each tissue, where in the cell each of those proteins is located, and which other proteins each is interacting with.”

Realize that one million proteins are encoded by about 20,300 genes and that scientists do not know, as of now, which cells in a specified tissue are producing which protein. The Proteome Project research will be a huge step forward to understand the working mechanisms for both health and sickness. But we must return to the story of DNA.

This post is an excerpt from chapter 7.6-7 of Inventory of the Universe.

Here’s a gif image showing the translation process–the building of individual amino acids into complex chains of protein. This process within all the myriad other processes is a wonder in itself.

Below are a couple of videos showing the transcription and translation processes. As you watch these, try to step back and get the big picture. All this activity is going on in the confined space of billions of cells, about the width of one strand of hair on your head!… every instant of the day throughout your life.

This next video is more illustrative and adds to your understanding of ‘copying complexity, creating perfection.’

Since you read all the way to here… you liked it. Please use the Social Network links just below to share this information from The Explanation, Protein Transcription and Translation – A Reliable Copy