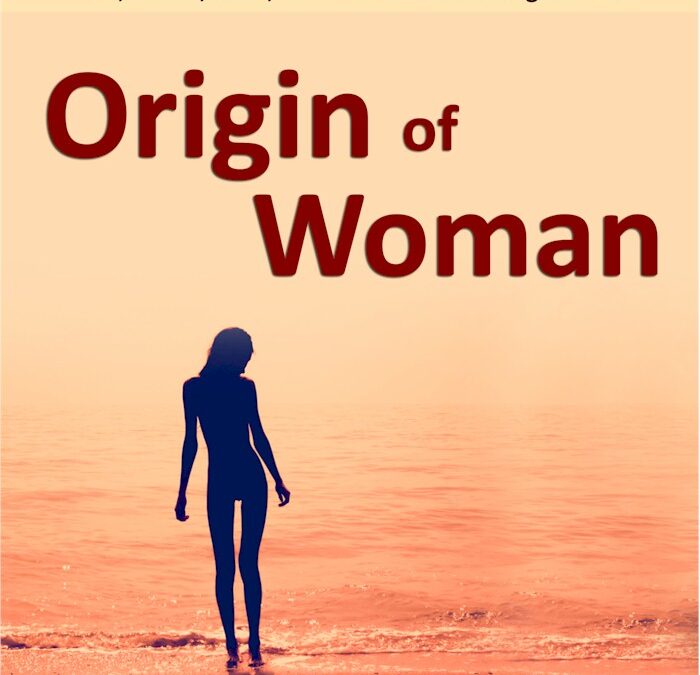 Origin of Woman. The creation of man gets only one Bible verse; the creation of woman, eight. Learn this incredible story, starting with the preface to the book. 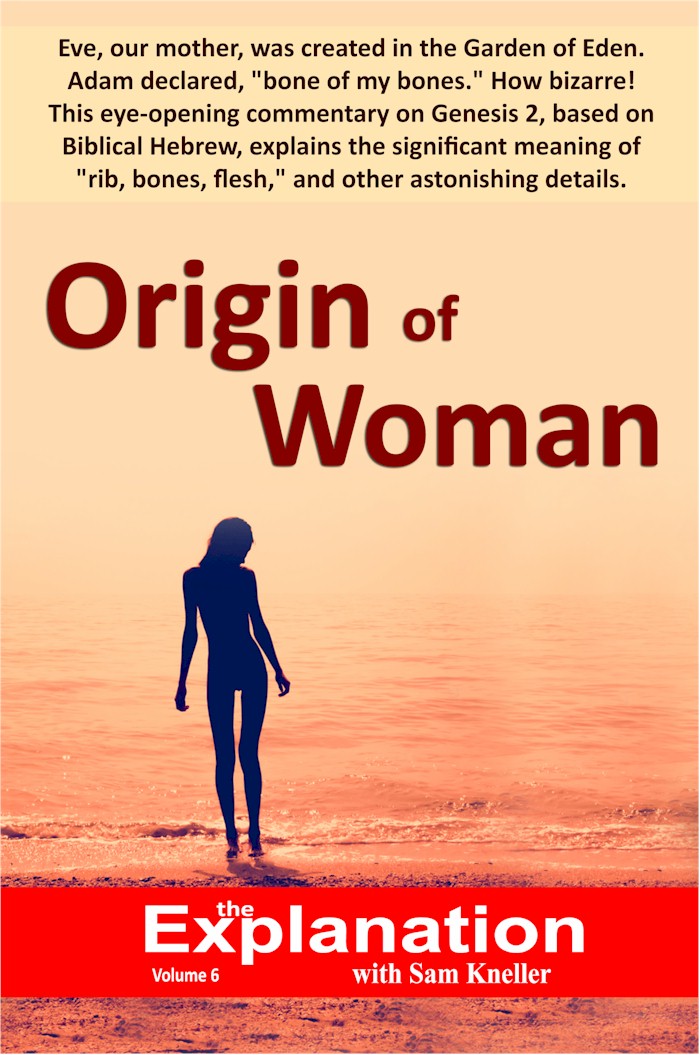 Origin of Woman- Where did Woman really come from? Cover and Preface of the book.

Given the social climate and the activity and talk that surrounds women’s movements and women in general, some might consider this book controversial. The goal of The Explanation is not to participate, that is to be for or against, in any movements or controversy. But rather to explain what the Bible indicates.
(Origin of Woman, Preface)

This book is simply the follow-on of Origin of Humankind (volume 5) which focused on Genesis 2:7; creation of the first man. In essence, the first human being of the world population. As such, the key is to understand what makes a human human. It is the neshama, the mind.

God placed that man with his mind in the Garden of Eden. But man, with mind, even in the Garden, is not good alone. Hence the creation of woman.

Her beginning occupies eight verses, whereas that of the man, only one. Straightaway, we realize there’s something astonishingly special about her appearance on the scene.

Origin of Woman develops these telling details based on the meaning of the Biblical Hebrew words. The narrative is full of hidden gems. They enhance and complete the story of WHY God created humankind and what His plan is. And why the woman is a primary element in its accomplishment. The ending is magnificent, but you’ll have to read the book to find out just how sumptuous it’s going to be.

The story of the Universe, of which the man and the origin of woman are key pieces, is the narrative of coherent completeness. Like an oversized jigsaw puzzle, there’s only one way to assemble it, to reveal the original picture. Likewise, with the roles of the man and the woman. Origin of Woman develops the mystery of man and woman. It explains WHY there are marked differences in their mindsets, WHY this is designed as it is by Yahveh, Himself.

The Explanation series answers the evasive question, “How can we bring peace and prosperity to humankind and Earth?”

Inventory of the Universe (volume 1) reveals just how interdependent, every single cog, all aspects of the Universe are. Space, atmosphere, water, land, flora, fauna and humankind, unique from animals, are the oh so complex, but oh so interconnected actors of our play. This book brings readers down to earth, away from consumerism and the daily hustle and bustle, back to our real roots. Focus on the big picture, the essentials.

Audit of the Universe (2) and Audit of Humankind (3) present an overview of how humankind has managed our planet. Is the half-full glass of peace and prosperity getting fuller or emptier? They focus on humankind’s role in this equation. Humans are at the pinnacle of dominion over Earth, how are we faring in this role? It details the Singularities of Humankind, How Humans Function, Socialize, Govern, and Reason. What is the outcome of human relations and rulership?

Origin of the Universe (4) unpacks popular ideas and shared beliefs in the light of Biblical Hebrew. For those not familiar with the Bible or Genesis, it includes preparatory material that answers fundamental questions: Why look for answers in Sacred Books, and in particular, the Bible? How to interpret the Bible, and what is real Theology? It then jumps right into the thick of Genesis 1:1 and is a commentary on chapter 1.

This book, Origin of Woman, is the sixth book of The Explanation series.

Origin of Woman is a commentary on the end of Genesis 2. Learn what the Bible says about the rights and responsibilities of women. The Biblical Hebrew is so much more revealing than your native language. Follow along with the freely accessible online Bible tools.

There’s so much polarized and conflicting information on this and so many other subjects today. It’s can be a wearying task to differentiate fact from fiction. The Explanation will help in establishing groundwork benchmarks so you can measure the validity of circulating information. It will equip you with a robust grid onto which you’ll be able to fit new pieces of the puzzle until you have a more focused and precise picture of the world in which we live.

Join Sam for a deep dive into a topic that concerns fifty percent of the world population. Seekers of answers to the big questions in life cannot skirt this issue. Such understanding is so much more than just information; it’s fundamental knowledge. How and where do women fit in the puzzle of the Universe? Eight Bible verses you need to get right, to see how the female role fits into the puzzle of why Humankind is on Earth.

Jump into the narrative. The first man in on the scene (Origin of Humankind, volume 5). Next is the creation of the Garden of Eden, the sumptuous home, prepared like a diamond-studded jewel, for the arrival of the first woman.

This blog post is an excerpt from the Preface of the book, Origin of Woman.

Since you read all the way to here… you liked it. Please use the Social Network links just below to share this information from The Explanation, Origin of Woman. Preface. Eight Bible Verses to Explain