Garden of Eden. Represents Much More than a Garden 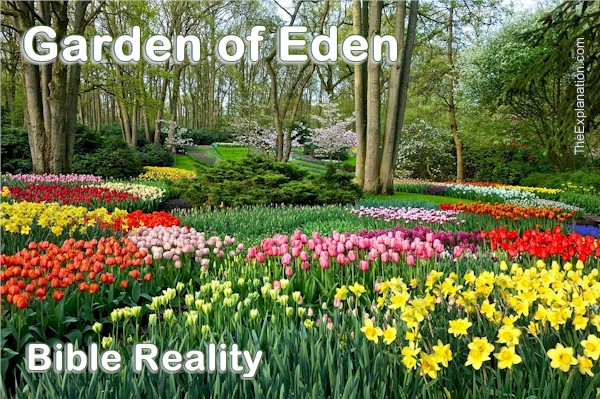 Garden of Eden. Myth or reality? Imagination or Paradise? It is Bible reality, described from Genesis to Revelation in notable fashion.

The Garden of Eden. In the bible, this exquisite home is reality. It is described throughout the Bible in many ways.

The Garden of Eden and its creation was the immediate first act after creating the first man. Genesis 2:8 recounts this episode. Understanding the relationship of man, humans to the Garden of Eden is comprehending the Plan of God. Let’s start by establishing some basics which mythology and religion have twisted out of shape. God made a neshama nefesh. A conscious being whom He houses in sumptuous surroundings. God alone, can insert and extract human beings from the Garden of Eden.
(Origin of Woman, chapter 1.1)

I used the analogy that the renewing of Earth was like preparing the room for the baby. In that case, you want to finish the room before the baby arrives. Why then does God first create Adam, and only AFTER that event does He organize the Garden of Eden?

To answer that question, let’s first take a closer look at what the Garden of Eden is. We are going to resort to the Biblical Hebrew and Strong’s concordance. We need a deeper understanding of the vocabulary used here, starting with the word planted. What does that mean?

We think of planting seeds or flowers. Planting of the Garden carries major significance. This idea is solidly fastening, putting down (striking in as Strong puts, like with a hammer) deep roots. God firmly affixed this Garden. Once in place, it cannot be removed. Today, the Garden is nowhere in sight. Maybe that’s why people read this as a myth. Notice that nata – planted is literal as well as figurative. That’s the fourth key to mastering Biblical Hebrew. See what else God plants figuratively. Here’s a noteworthy related verse that Moses sang after passing through the opened Sea with the Israelites on their way to the Promised Land.

17 You shall bring them [from the Egypt exodus] in, and plant (H5193) them in the mountain of your inheritance, in the place, O LORD, which you have made for yourself to dwell in, in the Sanctuary, O Lord, which your hands have established.

18 The LORD shall reign forever and ever.

All the elements of Genesis 2.8 are in these verses in Exodus. God’s property is the mountain of your inheritance. There is the Sanctuary (Headquarters, referring to Jerusalem and specifically the Temple, this context is also prophetic), which God has built with His own hands and in which He dwells; this is analogous to God planting His Garden of Eden, His dwelling place. This mountain is God’s inheritance, His estate, which He SHARES WITH those of the Exodus, those who come out of Egypt, come out of sin, eventually all repentant human beings. How permanent is this planting of the Sanctuary, the Garden, and humans? Verse 18 answers unequivocally, forever, and ever.

When you can grasp the Biblical Hebrew and tell the story of just one word, to plant H5193, you can look into the depth of God’s plan. You see the word garden and think of roses or vegetables. Yes, but, in so doing, we’ve missed the entire figurative meaning.

The Garden in Eden is fenced. Politically, today, walls have bad press, but they can fulfill a needed purpose. Here’s a verse about a future Temple, a Sanctuary, with the explanation of why there’s a wall.

15 Now when he had made an end of measuring the inner house, he brought me forth toward the gate whose prospect is toward the east and measured it round about.

20 He measured it by the four sides: it had a wall round about, five hundred reeds long, and five hundred broad, to make a separation between the sanctuary and the profane place.

The Sanctuary and specifically certain parts like the Holy of Holies are holy. They are pure and dedicated for holy use ONLY by certain Priests. I can’t get into the details here, but verse 20 reveals a WALL separating this holy area from the profane, which was all around; this is exactly the scenario and sense of the Biblical Hebrew word gan – garden. It is a protected area reserved for the holy. At their creation, Adam and Eve were holy, placed in a holy environment.

You know the rest of the story and how God ousted them because they lost their holiness. They exited via the EAST gate. The whole plan of God consists of bringing humankind BACK INTO the Garden of Eden, this protected holy place, via the East gate.

Christ entered Jerusalem from the Garden of Gethsemane (East of Jerusalem). On His Return, He enters Jerusalem from the East. On His crucifixion, the curtain that was rent (Matthew 27:51), signifying the entrance to the Holy of Holies, RE-entry to the Garden of Eden, was on the EAST wall of Holy of Holies. In ancient times and Biblically, the East was the main point of the compass, not the North.

Once you’ve entered this Garden from the East, you’re under the protection of the God of the Universe. This wall is not for belligerence, but rather a Sanctuary of Peace with an open gate on its Eastside. Yes, there are requirements to enter, to pass from the profane to the Holy. Yes, there are other entry gates. But that’s another aspect of our story.

Many people, even religious, believe the concept that the Garden of Eden is a myth. Or, at best, it is the figment of the imagination of some author, based on an ancient myth, who wanted to transmit some hope or national nirvana to his people. The Explanation does not take this viewpoint. I’m presenting a theological point of view. Taking God’s Word as God’s Word as foolish as it might sound. Eden existed and is multi-symbolic of sacred places and worlds to come. Unfortunately, Strong’s comments and even the translation do not give a hint of its majesty.

These KJV words are an extremely pale representation of future reality. I realize, if you’re reading this for the first time, it sounds very extravagant. But The Explanation bases this presentation on mastering Biblical Hebrew and the roots and stories of the original language words. None of this is hypothetical or mystical. It is coherent completeness coupled with Biblewide corroboration. In Genesis 2:7, God creates humans and then, in the very next verse, gives the ENTIRE plan, all the way through to the final accomplishment, Eden. its masterly authorship by a majestic Author; we should expect nothing less of God.

10 And he carried me [the Apostle John] away in the spirit to a great and high mountain (see the mountain of Ex. 15:17 above), and shewed me that great city, the holy Jerusalem, descending out of heaven from God,

11 Having the glory of God: and her light was like unto a stone most precious, even like a jasper stone, clear as crystal;

12 And had a wall great and high, and had twelve gates…

24 And the nations of them which are saved shall walk in the light of it: and the kings of the earth do bring their glory and honour into it.

26 And they shall bring the glory and honour of the nations into it.

27 And there shall in no wise enter into it any thing that defileth, neither whatsoever worketh abomination, or maketh a lie: but they which are written in the Lamb’s book of life.

That’s an introductory description of the future Garden of Eden. There’s plenty more to add. See the comparison. First, God prepares His people (like Adam) then comes New Jerusalem, (like planting the Garden). If there’s not full righteousness, there’s no Garden, that’s why there’s no Garden today. Verse 12 relates the walls that will protect the saved who walk in the light. The ungodly cannot enter this holy city, just like the two cherubim protected entry to the Garden of Eden.

Only those in the Book of Life are in the New Jerusalem. These are all God’s people who have the same pure nishmat chayim the pure consciousness of life that Adam had, that God breathed into him at Creation. It’s this entire process of the nations, all nations, all peoples who have ever walked the face of the Earth, receiving the opportunity to return to a pure nishmat chayim that is the story of the Bible. All people are equal before God, and all will have that opportunity. The Explanation tells the incredible story of the Garden of Eden inhabited by all those who will inherit Eternal Life.

This one verse, “God planted a Garden eastward in Eden,” merits an entire book; maybe I’ll write it. Because the Garden has multiple prefigurations in the Old and New Testaments with the Tabernacle, the Temples (plural), and the Church, the curtain was miraculously rent, from top to bottom, in the Temple when Christ died on the cross.

That signified the removal of the two Cherubim from the entry gate to the Garden of Eden. For the first time since Adam and Eve were cast out, God’s servants, Christ being the First, the Firstfruits, could enter the Holy of Holies, God’s dwelling. For the first time, a human (the man, Jesus) had put on the FULL IMAGE and the FULL LIKENESS of his Father and entered the KINship of Elohim.

This blog post is an excerpt from chapter 1.1 of the book Origin of Woman.

Since you read all the way to here… you liked it. Please use the Social Network links just below to share this information from The Explanation, Garden of Eden. Represents Much More than a Garden