The Sacred Book (if it exists): Is it Incredibly the Bible? 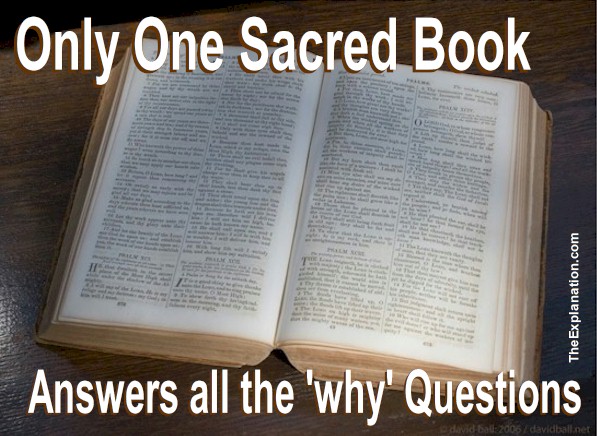 Which Sacred Book (if any) Answers all the Questions with Coherent Completeness? That is the Only One we’re searching out.

Why would I focus on the Bible? Of all the Sacred Books, could it be the only one to answer all the ‘why’ questions?

Just one Sacred Book?! One could read that introductory question and retort, “Sam, that’s a Catch 22 conundrum: You’ve got to read, study, comprehend and be an expert of ALL the sacred books before you can decide if there’s just one that answers these criteria.” That, in itself, is a lifetime endeavor. Indeed, some have gone that route.
(Origin of the Universe, chapter 2.5)

I’m not an expert in all these books, and I don’t have a lifetime to devote to such a study. Do I throw my hands up in despair? No. Let’s look at some basics, starting with some numbers of major religious groups. Why religious groups? Because they are the ones that refer to sacred texts. You can find more information on these statistics of believers here.

The sacred book(s) used by each of these religious orientations is specific.

Hinduism refers to the Vedas, of which there are four: the Rigveda, the Yajurveda, the Samaveda, and the Atharvaveda. The point I’d like to bring to your attention is their content: mantras, benedictions, text on rituals, ceremonies, sacrifices and symbolic-sacrifices, commentaries on rituals.

Another text which forms the basis of Hinduism also shared to some extent with Buddhism, Jainism, and Sikhism is the Upanishads. These sacred writings discuss meditation, philosophy, spiritual knowledge, and worship. They delve into—Brahman—the nature of ultimate reality and, mokṣa, the path to and character of spiritual liberation. The Upanishads goal is to reveal the way to an individual’s freedom, their liberation in this life, or afterlife. It is about the individual, one’s knowledge about their soul.

Their sacred work entitled Tripitaka exposes rules and regulations of monastic life that cover dietary practices, dress code to certain personal conducts that are prohibited. These are wisdom texts. Another sacred work is Dharma, which reveals the purification of human beings and their moral transformation. The word dharm, when used by the Sikhs, refers to correct religious practices that lead to the path of righteousness. Buddhist training revolves around three key elements: higher virtue, higher mind, and higher wisdom.

Then, there’s the all-important Dhammapada composed of stories and sayings of Buddha. The theme of Buddha’s teachings was to promote the Buddhist way of life.

The conclusion I want to draw here is that these sacred works focus mainly on personal development and leading a life of piety. These works do not delve into subjects and matters that deal with the why of the Universe, Earth, Humankind. Their wisdom teachings and way of life characterizes people in the East. Taoism and Confucianism propose the maintenance of ethics and the cultivation of virtue, while Chinese folk religion adds in shamanism, ancestor worship, magic, ghosts, and other spirits.

Here, the dualistic forces of nature, that we in the West are so aware of, come into play, when we talk about yin and yang. The darker, softer, calmer, feminine yin opposed to the brighter, harder, passionate, masculine yang. A person learns from both the yin and the yang, and thus lives in harmony.

Hence, some prefer referring to these Eastern teachings as a way of life or a philosophy rather than a full-blown religion, as we know it.

Please understand the point of this blog post: It has nothing to do with the integrity, quality, practicality, or depth of the sacred books of the East. That’s not what we’re discussing. The ONLY point we’re establishing is:

The Eastern sacred books do not pretend to answer all our 'why' questions in a complete, coherent way. That's not their vocation. Click To Tweet

This Oriental type of religion, philosophy, mythology, wisdom in all its ethnic varieties, forms, and traditions accounts for almost half of the world’s population. The other approximate half of our planet has a different basis.

As we know, the Quran is the basis of Islam. What we need to realize is that like Christianity, Islam is an Abrahamic Religion. That is, both Islam and Christianity believe in the sacred nature of the Torah, the first five books of the Old Testament believed to be composed by the prophet Moses. Along with this, traditional Muslim understanding highlights passages in the Quran, which affirm the Christian Gospel as the valid revelation of God.

Of course, each religion has its particular interpretation of these same scriptures. Within each of these two mainstream religions, there are many, many groups, each holding their specific viewpoint.

With Islam representing about a quarter of the world’s population and Christianity’s 2 billion followers, another third, their foundational sacred book has taken on a life of its own. And that brings us to the Bible.

In the entire Western world, the sacred book is the Bible. Judaism limits itself to the Old Testament, but Christianity, in all its variegated forms, accepts and believes in both the Old and New Testaments. Some Christian religions consider additional works as sacred. These works may throw light on some questions we are considering, but the cornerstone key and common denominator of Western religion remain the Bible.

When you get down to it, the only book that is considered sacred, that is, inspired by a non-human source that can begin to answer all our questions, is the Bible.

The only book considered sacred that can begin to answer all our questions is the Bible. Click To Tweet

I also understand that you might acknowledge the Bible as a ‘special work’ but not accept it as a ‘sacred book’ and certainly not as one inspired by a s/Source beyond humanity with answers to all our mundanely, earthy questions. Ok, this is where I need to ask you for patience. Such a subject takes time to develop; that’s what the rest of this book, Origin of the Universe, intends to do. Please read on.

Why would I focus on the Bible? On what is known as the Old and New Testaments? The Bible is an incredible paradox. The all-time best-seller, all-time number of misunderstandings.

If you have not read the two short lead-up posts on Theology and Sacred Books before this one, I suggest you do so. Especially if you are not a Bible advocate. Maybe you’ve had no interest or turned off interest in this book. You’ll quickly learn how and why I’ve progressed to focusing on the Bible: We want and need writings that answer the ‘why’ questions.

The identifying sign of the One Sacred Book
we’re looking for is that it will give
real, coherent complete answers to the BASIC questions
for which HUMANKIND does not have answers.

Questions that are so basic as to defy the imagination include:

Our ONE sacred book must answer not just 25% or 50% or 72% but 100% of these questions and indeed even the issues that we don’t think to interrogate!

Our ONE sacred book must answer 100% of our 'why' questions and even the issues that we don’t think to interrogate! Click To Tweet

Of all the Sacred Books I listed in a previous post, the Bible is the only one that has the answers to these fundamental questions of life—and, if you don’t mind, I’ll add death—because since we’ll all go through that, it is a fundamental question which we cannot ignore: Why death? What is its purpose? Is there an afterlife? Why? How? Where? Under what conditions? Does everyone participate? And the list of down-to-earth questions goes on and on.

Now, let’s get down to brass tacks. That I’ve focused attention on the Bible is nothing new. After all, many preachers are pounding out messages from the Bible. Hotel rooms carry a copy, and they’ll even deliver one to your door free, accompanied by people who will explain certain teachings directly from the Bible’s words.

So, why continue reading what I’m writing?

Because I submit to you that whatever language they are using other than the Biblical Hebrew (I will not get into the Greek for now) is incomplete and does not tell the whole story. Please don’t get me wrong. I wrote INcomplete and the WHOLE story. Oh yes, the English, French, German, Spanish, Japanese, Chinese, indeed all translations DO TELL A STORY—but NOT THE COMPLETE STORY.

Sorry for the capital letters, but I need you to pay attention and stop and even get a little irritated by both the way and what I just wrote. I’d like to move you enough to become curious as to what the Biblical Hebrew says and what you might be missing in your comprehension of this ONE SACRED BOOK.

This blog post is an excerpt from chapter 2.5 of the book Origin of the Universe.

Since you read all the way to here… you liked it. Please use the Social Network links just below to share this information from The Explanation, The Sacred Book (if it exists): Is it Incredibly the Bible?