Pollination and Chronobiology in Flora – How it works 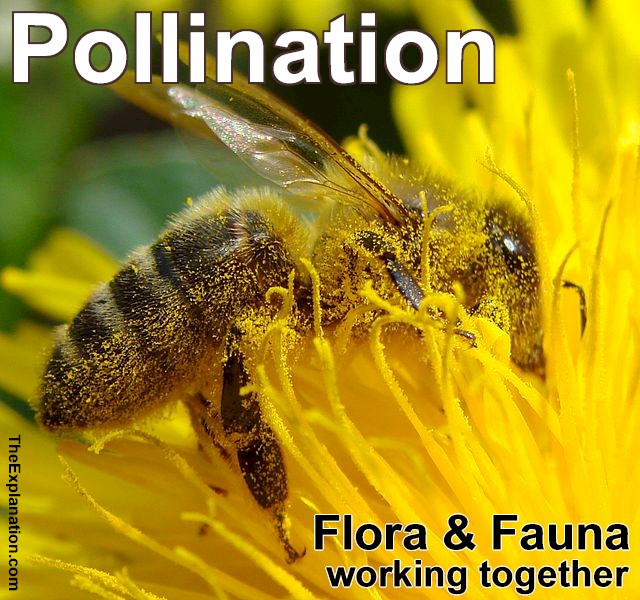 Pollination, see the pollen on the bee as flora and fauna work together to make our environment.

“Many of these plants—including the figs and cassava along with worldwide food staples like barley, wheat, and rice—are food crops with their own seasons and their own internal chronobiology, needing specialized pollination,” Galacti says.

“They have their own internal biological rhythm, their responses to light and changes in temperature and seasons,” I add, and our farm expert from the last chapter understands this.
(Inventory of the Universe, chapter 5.4-5)

“Let’s speed up the annual growing cycle to see how this works. It’s called the circadian rhythm, meaning it lasts about twenty-four, or about the length of a day,” suggests Galacti. Internal timing in organisms is necessary for the survival of a species and is adapted to its natural habitat. It’s even adaptable, as the Southern and Northern hemisphere plants illustrate in our demonstration garden.

You’ve noticed that the leaves open up during the day and close toward sundown. This daily exposure to light is the time for stem growth, and when biochemical processes like photosynthesis are in sunny action. This is also when gas exchange, carbon dioxide to oxygen, and water transpiration take place.

The next is a “circamonthly” rhythm, which isn’t very obvious in plants. However, experience has shown us that planting according to the full moon promotes growth. Then there’s the “circannual” rhythm, with which our visitors are all familiar.

This annual seasonal rhythm holds true for the dormancy of certain seeds, regulating germination, flowering, emission of a fragrance to draw insects for pollination, and abscission (the shedding of leaves, flowers, or fruit). I have a hazelnut tree, and each year I am amazed to see how the cup of the hazelnut releases its nut on maturity.

Some bamboo species have lengthier cycles and flower only once every seven, sixty-five, or 120 years. The longest known cycle is 130 years for phyllostachys bambusoides, also called madake. This bamboo is common in China and Japan, but also worldwide. Its chronobiology is such that no matter where it grows, whether north, south, east, or west, or in a tropical or cold zone, all the plants flower at the exact same time. This reveals just how far the “internal alarm” goes.

Whether this bamboo grows N, S,E, or W, its cycle is all the plants flower at the exact same time every 130 years. Click To Tweet

We stand underneath the Middle Eastern/Mediterranean fig trees. A swarm of large wasps deters us from inspecting the trees, but Galacti provides protective beekeeping gear so that we can observe the wasps closely and safely. Guarded from stings, we witness the wasps land like a squadron of mini fighter planes on the figs and pierce them. They crawl inside, lay their eggs, and sweeten the “delivery” by depositing nectar carried on their bodies or in a special pouch.

The F-15 fighter wasps that have not yet entered a fig buzz around the fig trees. One fig cracks open at Galacti’s prodding and we can see its inner flower hidden under the skin, never having seen daylight until now. “This is why the figs depend on the wasps for pollination,” Galacti explains. “Why is the fig designed that way?” a traveler wonders. “It seems counterintuitive.”

“Not to the wasps,” Galacti says.

“But every flower that’s pollinated usually needs daylight, right?” someone else questions. “I know there are some nocturnal food or flowering plants, but they’re rare, aren’t they? Unless you live in Alaska, where it’s twilight all day in the winter.”

Targeting the fig, a female wasp (the squad is exclusively female) drops eggs inside the ovules and pollen inside the stigma which are parts of the fig’s flower florets. “See? They have their routine down,” Galacti says.

If the wasps neglect to provide pollen to one or two figs that they’ve “impregnated” with their eggs, those figs will drop to the ground within minutes.

“Uh-oh,” Galacti says. “The wasps didn’t reciprocate. They didn’t fulfill their part of the contract, so the tree is demanding a ‘nonpayment penalty,’ to put it in human terms.”

“You mean because the wasps wanted the fig to be a host for their eggs, but then decided, (if decided is the right word) not to pollinate the figs?” asks the visitor, who first wondered about the nature of figs.

“That’s right,” I say. “Cornell University has observed this give and take, and now you are seeing this relationship between figs and wasps for the first time. There is a season for the wasps to lay their eggs, and there is also a season for the figs to grow.”

The farm expert remembers something. “Actually, there are two seasons for the figs: one in May and June and the other in December and January, although in some climates figs are grown throughout the year.”

“And the fig wasp mating season follows the same chronology (or chronobiology), so the timing of both the fauna and flora parties is just right,” I reply. “Fig wasp and fig tree life cycles are intricately tied together.”

“Where do the male wasps fit in this cycle? I didn’t see any,” our first questioner wants to know.

Galacti nods at the inside view of the normally closed fig. The female wasp has died during our conversation (just hours after laying her eggs), but the fig rapidly absorbs the body. “It’s definitely a different process from your human childbearing, but not so different from other species,” Galacti says.

“That wasp provides nutrients for the fig in addition to the pollination.”

The eggs hatch before our eyes as we contemplate the wasps. Wingless males are born, mate quickly with the females, and then die just as quickly inside the fig after a few hours. The fig is their short-lived home from which they never emerge. On the other hand, the females join the F-15 squadron. It’s a short life cycle, and someone remarks that perhaps some females feel they’ve given enough without helping the figs thrive.

“The fig trees’ instinct is to thrive,” Galacti says. “After all, they are assisting the wasps with reproduction. This is their season; this is their time. In addition, you miss another part of the cycle without the ripening figs.”

We watch as the figs ripen in accelerated time. Animals and birds arrive at the fig tree, eating the figs and discarding the seeds. These “seeds” are actually tiny fruits that comprise the whole fig. By eating the figs, the animals and birds guarantee the existence of future fig trees. This is cross-pollination at its most elegant, and the precision of the arrangement is not lost on anyone.

Likewise, the complexities of the chain of events merit contemplation. The wasps sacrifice themselves and die in order to ensure their own reproduction and the figs’ existence. At the same time, the females have a safe place for their eggs, but the figs punish the wasps if they don’t assist with the flower’s fertilization.

As Galacti says, this is a covenant conducted by beings without our intelligence—the tree certainly does not have a mind, and the wasp has a limited brain. Next time you eat a fig, realize that it is not a fruit, but a flower that never sees daylight! As such, it needs to be pollinated in this strange way.

Likewise, our wheat crop has its own pollination mechanism: the wind. Inside the “spike” or the ear of the wheat plant, humble, inconspicuous flowers wait for the winter, spring, or autumn wind to blow pollen grains from neighboring plants.

These flowers don’t need elaborate color or the ritual mating/pollination sequence of the fig trees because the wind provides it. Wheat is not the only plant with this simple mechanism; the crop in the rice paddies also benefits from wind pollination. And yet there is separateness—an order to things.

The figs cannot be cross-fertilized with the wheat, and the lichens have found their own way of reproduction. At the same time, neither plant could reproduce through, say, a cinchona tree.

Even wheat and barley don’t cross-pollinate, nor do they use the rice in their life cycles.

There are many fascinating relationships between plants, but pollination isn’t among them, no cross-pollination Click To Tweet.

As the wind gently blows through the wheat, we notice the simplicity of the pollination process, specifically the way grains of pollen are blown from wheat flower to wheat flower. It seems to be chancy: why wait to be pollinated by wind? What if there is no wind? There are windless zones near the equator, but wheat does not grow in those areas.

We contemplate the unprocessed, raw wheat and grain as well as the simple rice. “This is the spring harvest,” a woman remarks. “I don’t know how I know. I can just feel it.”

This post is an excerpt from chapter 5.4-5 of Inventory of the Universe.

You need to listen to filmmaker Louie Schwartzberg, who shows us the intricate world of pollen and pollinators. Here are some gorgeous high-speed images from his film “Wings of Life,” inspired by some of nature’s primary pollinators: honeybees, bats and hummingbirds.

Since you read all the way to here… you liked it. Please use the Social Network links just below to share this information from The Explanation, Pollination and Chronobiology in Flora – How it works