Spring Wheat Harvest – How do Seasons Schedule its Growth? 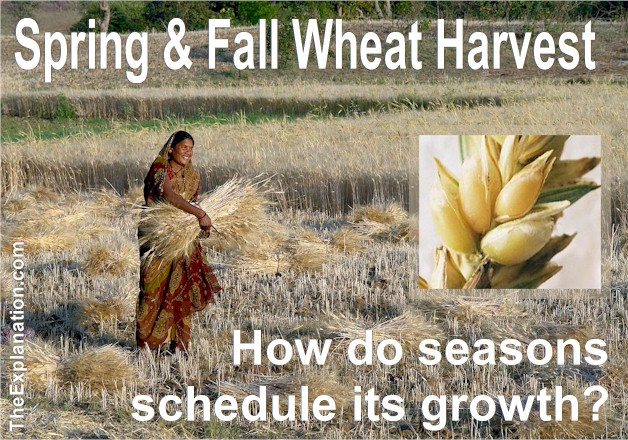 Spring and Fall Wheat Harvest … one of the biggest domesticated crops in the world, and we don’t realize how the seasons schedule its growth. Spring and Fall Wheat Harvest … one of the biggest domesticated crops in the world, and we don’t realize how the seasons schedule its growth.

“Before I tell you about the wheat life-cycle, which has two harvest seasons (one early in the spring, and a much larger one in the fall), let me tell you why that third field was left empty,” Galacti says.
(Inventory of the Universe, chapter 5.6)

Spring and Fall Wheat Harvests ... do you know or realize how the seasons schedule their growth? Click To Tweet

Our farm expert has an idea why. It’s because of crop rotation, which is a planned order of crops alternating on the same field. For example, our barley field previously contained wheat, and now several of our volunteers are planting wheat on the harvested barley field. The ripe spring wheat harvest field previously held corn or soybeans, perhaps. In addition, the fallow field was planted last year with soybeans or turnips to restore the nitrogen in the soil and provide food.

“But now it supports that World Demonstration Garden,” the farm expert says. “Even though that’s unusual, most crop rotations work efficiently: they decrease disease, increase food production, and provide the nitrogen advantage. You can also plant both warm-season and cool-season crops. Farmers have practiced this for centuries as a way to manage farms, and they plant by the rhythm of the seasons.”

Plants practice crop rotation (if anything without a brain can be said to “practice”) on their own, without the extensive planning that humans undertake. For example, if there is a flood in a forest in Europe that devastates the flora, weeds take over the soil to protect it from wind and rain.

After the weeds die, berry plants (usually with protective brambles or thorns) rise up due to seed dispersal from birds. For example, fruit-eating birds in Denmark may have dropped seeds into the flooded or weedy areas. Berries provide food for the forests that will regrow through the efforts of seedcarrying birds and animals such as badgers, mice, and even ants.

Throughout this process, the plants are participating in the water cycle and taking carbon dioxide out of the air. An amazing automatic regeneration, natural and complex at the same time.

It takes concentration to watch as the farm expert plants the wheat seeds. They will sprout in the seedling stage and put down the tangle of roots, which will sprout shoots called “tillers” in the second stage. Next, each tiller grows its own stalk and seed head. We watch Galacti accelerate the growth of one plant so that the tillers will develop hard “nodes” in the third stage, from which the plants will continue to grow upward.

In the fourth stage, the “booting” stage, wheat heads emerge from the sheath of the stalk and immediately progress into the fifth stage, in which they develop flowers. Blowing winds scatter pollen from the male to the female parts of the flowers.

Moist and ripening simultaneously, embryos and endosperms (wheat buds) form and develop into hard wheat kernels. In a remarkable display of timing, all the wheat ripens and matures at the exact same moment. Water evaporates from the leaves and the kernels.

“These stalks are ready to harvest at last,” the farm expert says, but we are too busy scything and harvesting the spring wheat harvest.

The spring wheat harvest is actually considered winter wheat, as it’s planted in the autumn to take advantage of the season’s moisture, which helps the seeds germinate and sprout.

However, the seeds require only moisture when they’re planted, so they are well suited to a cold, dry winter. Cold temperatures slow the wheat’s maturation until after the barley harvest.

Spring sun and rain help the winter wheat mature in order to prepare for the April-to-June wheat harvest we’re currently observing. Most of us have never taken time to consider how one of the first domesticated food crops grows or how seasons schedule its growth, yet wheat is grown on more land area than any other commercial crop. Much of what we eat, including foods we’ve consumed on this journey, contains wheat.

We breathe the air, the purity of the air, and we note that the wheat we’re harvesting thrives on the carbon dioxide we’re breathing out. The wheat conducts photosynthesis and adds biomass in order to grow.

As we harvest the winter wheat we notice that, while the work is hard, we’re learning, so we don’t notice the passage of time. Galacti sets aside some fruits of our labor. “It’s a reminder of what we’ve accomplished here today,” he remarks.

In addition to our discussion on farming, we’ve planted flora that thrive particularly on the carbon dioxide in the air. Even as the teak trees are cleansing the air and using the carbon dioxide for their own photosynthesis, the rest of the World Demonstration Garden is participating in the cycle.

The wheat is turning golden brown as the processes within the plant transfer the water and nutrients up through the plant stalk.

This post is an excerpt from chapter 5.6 of Inventory of the Universe

This video follows the fascinating journey of whole grains and facts about their nutrition.

Since you read all the way to here… you liked it. Please use the Social Network links just below to share this information from The Explanation, Spring Wheat Harvest – How do Seasons Schedule its Growth?