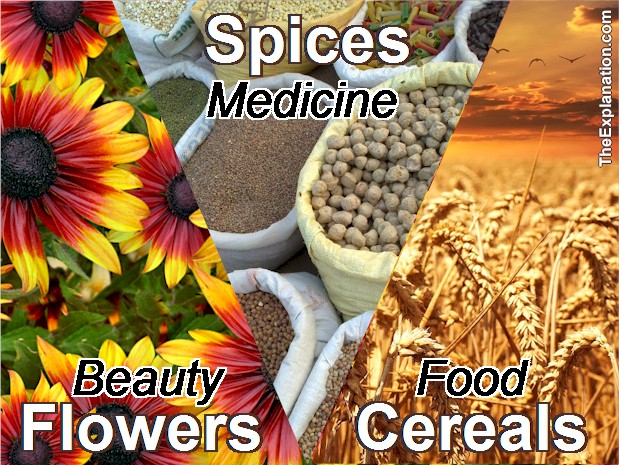 Flora: Flowers for beauty, oxygen. Spices for health, medicine and flavor. Cereal for food and fertilizer.

There are more pieces of the flora puzzle waiting as we prepare to plant the African section beside South America. Cassava from South America crosses the boundaries into Africa, but we won’t stop there. We intersperse finger millet, sorghum, corn, yams, maize, fonio (the Ethiopian grain teff) and palm nut trees with the cassava. Fonio, which few of us have ever seen, is a traditional cereal grain from West Africa.
(Inventory of the Universe, chapter 5.3.2)

In addition to being a highly nutritious and seemingly tenacious dietary staple (it’s actually a relative of crabgrass), it is perfectly suited to the semiarid, nutrient-poor soils in Africa.

It also provides inexpensive fodder for animals, and its straw is mixed with clay to make stronger bricks. Most of our travelers weren’t aware that this grain exists, since we’re used to thinking of Africa as an undernourished continent. In addition, we are just coming to learn about the Ethiopian grain teff, which is a low-risk crop that can grow in drought-ridden or waterlogged soils. Like fonio, it is an excellent food source for humans and animals, especially during the dry season when there is a shortage of feed.

We move on to India’s portion of the world flora garden, where we plant coriander, cinnamon (originally from Sri Lanka), aloe vera, and the turmeric plant. Basmati rice serves as a border, since it adjoins the white rice field next to our wheat field/demonstration garden. We again ponder the diversity as we look at palm nut trees, coriander, and pepper.

We learn that the black pepper tree has flourished in India, its country of origin, for centuries. How many of us ever thought about where the pepper in the peppermills and pepper shakers on our tables come from?

Pepper is a spice that can help promote the production of serotonin and endorphins (the sleep and feel-good hormones) in the brain and also encourage our bodies to absorb nutrients faster. It has sprinkled its way throughout the world, but its origin is India, where it’s suited to the rainfall in the Western Ghats region.

We notice that the pepper plant is climbing up the teak trees Galacti has just transplanted to give the black pepper room to grow. We can again see a relationship in which flora support each other.

As an added benefit, black pepper repels animals, which is why our travelers are grinding up the peppercorns (actually the dried, unripe fruit of the tree) in order to sprinkle them around our crops and repel animals.

“Middle East,” Galacti says, and we note that the Middle Eastern garden has a touch of the Mediterranean because one of our travelers has planted some figs. These also appear in the Middle East. Another unique set of flora from this biome includes oregano, dates, pistachios, eggplant, lentils, chickpeas, thyme, and almonds.

We examine the bean sprout-like fenugreek, which serves as a medicinal herb, a food, and also a spice. Several pigs that have made their way from somewhere in our farm into the Middle East garden stop and eat the fenugreek. One of our members is of Near Eastern origin and remembers the farmers in her town feeding fenugreek to animals that were “off their feed.”

The fenugreek can stimulate milk production in cows and relieve symptoms such as fever, headache, and ear infections. It can also soothe human stomachs the way it does animals’ digestion. It also soothes the soil and is used as a fertilizer in nutrient-poor Middle Eastern locations.

However, we are already achieving “plant overload,” and so we combine the Pacific Rim flora with an Antarctic/Arctic demonstration garden containing representatives of 350 species of mosses and lichens. We are particularly intrigued by the color palette of the red, orange, and yellow lichens.

These lichens from Antarctica are composite organisms that combine fungi with two types of algae in order to make food. As we learned from the nitrogen cycle, algae can take nitrogen from the air and make simple proteins. We haven’t riddled out the nitrogen paradox, however.

While other plant species all over our plot are competing for the nutrients, lichens and their algae components thrive in limited soil. This is a reason why they may be among the oldest organisms on Earth.

A woman in our group from a traditional society is excited to see lungwort lichens and Iceland moss, which she views as natural dye for the clothing she makes and as the medicine that cured the burns on her arm. The lichens also help her husband hunt to trap animals for food, but she most prizes the medicine, since it kept her mother from dying of pneumonia.

As we’ve seen, cinchona bark produces quinine, fenugreek and black pepper have medicinal uses, and even plants we never would have thought to be beneficial (such as the hard candlenut, or kukui in Hawaii) are used in oil to treat eczema and other skin irritations.

Our flora demonstration gardens are a rich opportunity to learn. Variety, climate, sunshine, water, soil conditions—so many factors and processes come into play to produce food for animals and mankind as well as greenery for fertility, air quality, medicinal and industrial purposes with their beauty and presence helping in health recovery and mood control.

Below is a very controversial video. Not from the point of view of facts… but their interpretation. It talks about minds, sensations, sensitivity, (the effect of music on plants) conscience, intelligence and social skills of plants to control the population of animals in its area. It draws the conclusion that because rice has more genes than man… it is more intelligent. The argument used is: ‘Try standing in cold water for a season.’ Well, you need to figure out if such an argument is valid.

I submit to you a thought. The puzzle interconnectivity… all the pieces fitting together in the most incredible way. If, somehow, something upsets nature, flora (and other things as well) react. The question is, does a plant react because of intelligence or is it already programmed to react. For instance ,at about 30′ into this video the question, ‘do plants sleep?’ comes up. We shall be discussing chronobiology. The 12 and 24-hour cycles that plants go through. (There are many other cycles as well as you’ll see). Is a plant intelligent, or is it reacting to tampering with its natural cycle?

The Explanation, Inventory of the Universe. This video, with scientists and researchers, reveals some most outstanding ‘interconnectivity’ that we’re becoming aware of. It shows just how ‘pivotal’ flora is in its role as ‘life supporter.’

This is an excerpt from chapter 5.3.2 of Inventory of the Universe.

Since you read all the way to here… you liked it. Please use the Social Network links just below to share this information from The Explanation, World Flora Demonstration – Flowers, grains: Food, Medicine