Problem Entanglement – Can we Unravel them? 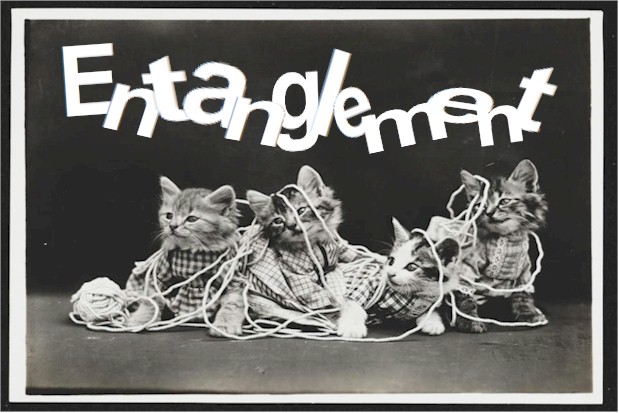 Problem Entanglement is cute when it involves kittens and a ball of wool. But when is involves our lives and complex situations around us… it can be hair raising. Photo Credit Harry Whittier Frees.

In France we have an alcohol problem. It is the number one cause of road accidents and 50.000 people die each year because of alcohol related health issues. It’s not just a ‘health’ issue because it also spills over into serious family clashes if one of the mates is overwhelmed with drinking.

In 1991 Claude Evin the Minister of Health instigated the Evin Law (Loi Evin) to limit advertising of alcoholic beverages (also tobacco). Essentially alcohol publicity is prohibited in cinemas, and on TV. Any messages and images are strictly controlled and are obligated to include a message indicating that alcohol abuse is dangerous to one’s health.

Just this week, the French National Assembly (equivalent of the House in the USA) passed legislation that softens these restrictions. It was an ‘amendment’ to a law proposed by the Minister of Economics, Emmanuel Macron. Both he and the Minister of Health opposed this amendment and suggested to legislators to vote against it. Their counsel was unheeded. Some say lobbying swayed the issue, others say that it is local interests like the influential wine-growing industry that represents a vast chunk of regional income, like in the Bordeaux area, that help vote in favor of this relaxation of the law.

I just heard a report about a judgement rendered on a case involving Dominique Strauss Kahn, with whom most people are familiar because of the New York scandal. He was involved in what’s known in France as the Lille Except for one person who received a one year suspended sentence all the prosecuted, including DSK were relaxed. Again, from The Explanation‘s point of view, the interesting aspect was the Court’s recognition that their involvement is only to do with the ‘law’ and not ‘morals’.  We might want to call that ‘disentanglement’ but isn’t there a tie-in between law and morals? Shouldn’t law be a factor that encourages, not to say, enforces morals?

If law is separated from morals, then what teaches and helps people and societies accept and apply moral behavior? If we want peace and prosperity, don’t we need both laws and morals?

Enforcing or curtail publicity with regard to alcohol and tobacco is not the sole factor as to their increased or decreased use, it is one factor, one measure. But, do all the measures: parental and peer influence, cost, availability etc point in the SAME direction as to the consumption of these items OR do they send opposing and conflicting signals to influenceable adolescents and adults? This latter situation is both the cause and result of ‘problem entanglement’.

A Washington Post article about Ferguson summarized the unfortunate events, responses and follow-up that is needed to right this situation.

Yet perhaps the chief unanswered question is, what kind of leadership will the region need as it tries to heal? In recent months, much has been made of the local leaders’ failures. Gov. Jay Nixon, Ferguson Mayor James Knowles and Police Chief Thomas Jackson were sharply criticized for their absence on the ground, and for the repeated missteps and bungled responses that undermined their coordination and their competence.

And now, as the area attempts to move forward, the leadership job before them will be even harder than managing the immediate crisis.

It will require overcoming the tendency for measures to lose their urgency. A local commission intended to address the “social and economic conditions” highlighted by the Ferguson protests could bring needed changes, but only if its recommendations are taken seriously, deemed credible by the area’s citizens and quickly acted upon. National initiatives, such as the ones proposed by President Obama on Monday, could take years to implement and have been called relatively modest in scope.

This article went on to list the ‘problem entanglement’ issues:

And of course, fixing the systemic issues — generations of racial inequality, a dysfunctional local court system, distrust between police and local communities — that helped spark the unrest is a complex, monumental challenge that could take decades.

These incidents, as with so many others will disappear from news headlines, that is the nature of news, but, unfortunately, they will smolder on for a long, long time. People involved will come and go, decisions will be made, some good, some poor… yes, we hope that it can be resolved, that we can get peel off the onion skins of ALL the aspects involved and get to the core issues and treat them. Frankly, that is not only going to take the involvement of the right people with the right wisdom, but the entire community. If that doesn’t happen, then we aggravate problem entanglement.

The point of The Explanation is not to sound like a broken record of difficulties and wretched problems. it is, however, to go beyond the immediate difficulties and see ‘situations’ as a whole. Everything is intertwined, even more and more so as technology and instant communication march on.

What ‘entangled problems’ do you see out there? What are you confronted with?

Here are just a few words around such issues. Think about them, think about successive decisions that have been taken, think about the debates and opinions, think about what happens when there’s a change of leadership, a change in strategy of how to handle and solve these issues. Are they becoming disentangled or more entangled?

Your comments are welcome below. Get your copy of the free report: Answering the Big Questions in Life. Let’s be upfront, you can’t throw around platitudes, one sentence solutions to problem entanglement. That’s naïve. This report helps you understand the influences that are at the origin of our worldview with regard to the big questions in life… and whether our answers are coherent or not.

Since you read all the way to here… you liked it. Please use the Social Network links just below to share this information from The Explanation, Problem Entanglement – Can we Unravel them?