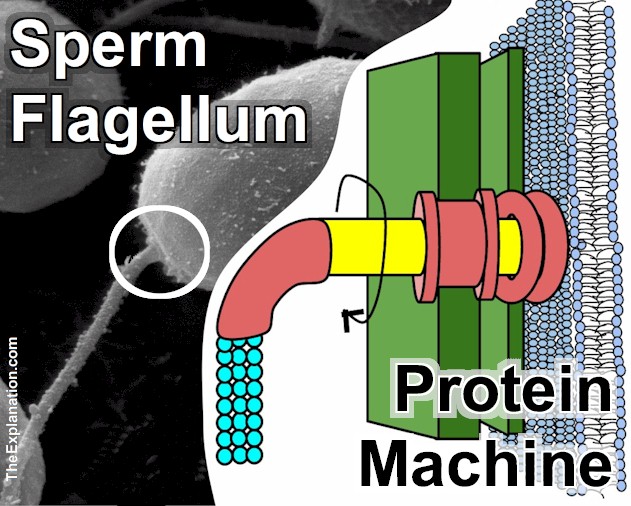 A sperm flagellum which propels the cell towards the ovum actually has a protein machine that acts like a propeller with continuous revolving motion.

These proteins, long chains of amino acids, represent 75 percent of the dry weight of our bodies and must go through an additional step to be crafted or folded in a particular way so that they can form different structures. Both synthesis and folding are essential; in fact, folding allows the protein to perform its specific function in the body.
(Inventory of the Universe, chapter 7.8)

In the cramped confines of a cell where a protein chain of thousands of amino acids is assembled in seconds, thousands of proteins are being constructed simultaneously. On leaving the ribosome factory, a protein is escorted by chaperone molecules to prevent it from entangling with other molecules.

Then the folding pattern is defined by the innumerable attractive forces of atoms within the polypeptide chain; think of these atoms as making up a mechanism like that of a 3-D printer. Some chains of one hundred amino acids can fold in one ten-millionth of a second (a microsecond), with others able to fold in the thousandths of seconds (milliseconds) to configure their final complex structure.

By comparison, to simulate just fifty milliseconds of folding would take even the most powerful computer about thirty thousand years. There are many fascinating aspects of protein synthesis, but this practically instantaneous folding into thousands of elegant 3-D geometric figures is something I find mystifyingly intriguing.

Here’s an article about Anton a supercomputer that set a speed record for protein folding. Worth a read to understand the gulf between man-made ‘machines’ and what billions and billions of machine proteins in your body accomplish second by second for your entire lifespan.

I suggest you watch a video that I provide a link to in the references at the end of the book and. The phenomenon of protein folding:

Why these specific shapes? These three-dimensional structures can be compared to machines that are the workhorses of our bodies. For instance, we talk about osmosis or semipermeability of a cell membrane, which allows certain amino acids to enter.

There’s a protein that is actually shaped like a pump, with its attachment to the cell wall that controls such comings and goings.

Interestingly, this pump is one of twenty thousand similar protein machines, and it’s the continual modification of the shape that actually makes each machine perform its action.

The #protein pump is one of twenty thousand similar protein machines that maintain all the activity in your #body ... like a smooth-running airport Click To Tweet

In other words, the amino acid really moves like a pump. Today we can watch these “machine proteins” in motion. In this post, you’ll see a couple of links to protein folding videos.

Galacti adds an analogy that puts proteins in a new light. “Compare how proteins labor in our bodies to the multitude of machines it takes to run an international airport smoothly: escalators and signs for channeling passengers, passport and security controls, baggage transfers, verified stickers for each flight, freight loaded into containers and aboard planes, and flight controls are all automatically triggered and perfectly coordinated.

Think about plane arrivals and departures, use of runways depending on wind, handling delays, lost children, and schedules. Even such mundane but essential items like airport washrooms need to have their plumbing, faucets, and other parts repaired and maintained. The list goes on and on.

The millions of parallel protein machines constantly modify their shapes in a very precise way to power your body, each turning on and off and performing its action on command when your brain consciously or subconsciously sends a signal.”

The variety of possible proteins and the billions of JIT combinations of amino acids and folding configurations that serve as enzymes, hormones, and cell and body machinery is something we’ve never considered—and this is just in one cell providing DNA instructions!

We ponder each cell replicating this process every second and the additional realization that each gene can produce multiple proteins within the cell. However, one cell can’t be important to human life—or can it?

This post is an excerpt from chapter 7.8 of Inventory of the Universe.

Below is a video that is a must watch. Ken Dill skillfully illustrates and explains the concept of protein folding. As I’ve said there are many processes in processes that are synchronized and inter-related to make our universe run smoothly. But, protein folding, to me, is one of the most fascinating processes of all. To understand how your body works and functions, the continuous factory that it is, watch this 16-minute video:

Here’s an eight-minute animation of the remarkable workings of an inner cell. Get a glimpse of the hundreds of protein machines–the result of just right protein folding–that are the heart and core of a perfectly functioning body.

Since you read all the way to here… you liked it. Please use the Social Network links just below to share this information from The Explanation, Protein Folding Machines Keep Your Body Running Smoothly