About seasons: it’s a gorgeous September day in Paris 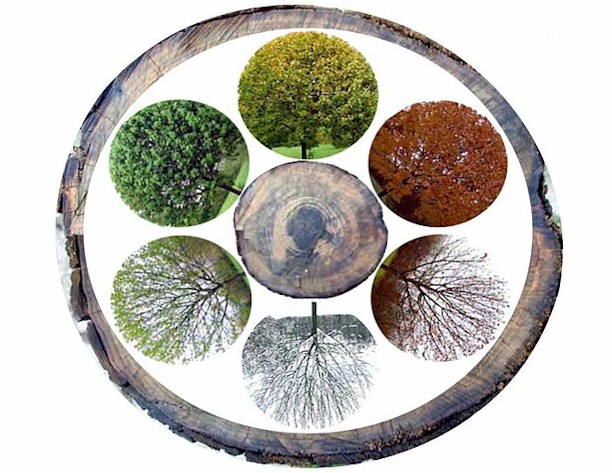 I live in the suburbs of Paris, France and it’s Thursday 18th September 2014, just four days from autumn and we’ve got a cloudless sky with one of the most beautiful days we’ve had all year! It is getting a little colder in the morning and the sun is setting noticeably earlier as the days shorten, announcing autumn. The season is changing, and I ran across the above image of a tree going through its seasonal changes. I was out in my garden noticing that my neighbor had picked most of his homegrown vegetables (of which he offered me some yummy string beans) and taking in the growing amount of falling leaves that will shortly end up as compost.

We look forward to seasons, something is in the air at all seasonal changes. Of course it’s part of the water, land, flora, fauna cycles… but it’s also part of man’s cycle.

One full year, everywhere on earth, swings man through the awakening, going outdoors of spring, the lazy balminess of summer, the back to school/work and Cooling of autumn to end with the cold but invigorating winter. Depending on his latitude, man is affected more or less by seasons with those in the temperate zones experiencing definite seasonal changes.

Without going into details, seasons are the result of the tilt of Earth’s axis.

Seasons represent one of the ‘recurring phenomena’ on Earth, like day and night when man NEEDS eight hours of sleep in total dark and quiet for ‘best rest’ of his body and mind.

Similarly, nature and that pictured tree as well as other flora and fauna need the four distinct seasons to: bud, grow, be pollinated, develop and produce seed and flowers, shed their harvest, rest and ready themselves for the next cycle of seasons.

Often nature documentaries will follow various plants, animals and locations… through their seasonal adaptations. Seasons tell time and are accompanied by a life story. With annual plants, their entire history from seeding to wilting lasts about 7 months.

Did you notice that the calendar which most of us are aware of, with planet movements, counts four seasons but ecologists count six seasons.

In the above ecological calendar, the longest and ‘deadest’ season is Hibernal, it lasts four months. All the other five growing seasons are compacted into the eight remaining months.

On Earth, seasons are intimately related to the life cycle. They are much more than timepieces. Seasons tell a story about life. There are all sorts of stories that revolve around the seasons, but ts there a key story, if so, what is it?

The Explanation will get more and more interesting as we go deeper and deeper into life related subjects. Sign up in the right column to receive notifications of new posts and not miss out. I’m interested in your comments below.

Since you read all the way to here… you liked it. Please use the Social Network links just below to share this information from The Explanation, About seasons: it’s a gorgeous September day in Paris