Evidence the Big Bang is Our Origin. Is there Undeniable ? 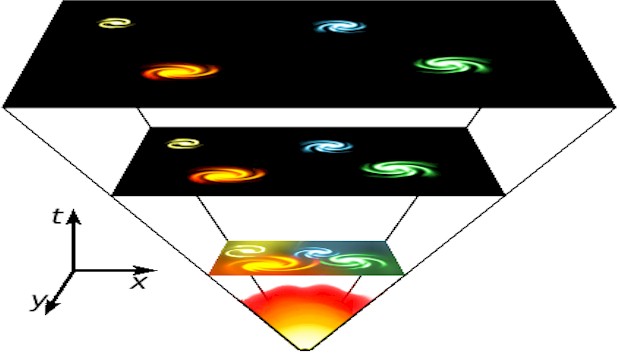 Only 49% of Americans believe the Big Bang is the real origin of the Universe. What about the remaining 51%… what do they believe? A lot of the 51% believe in their Christian faith which, from their Bible understanding, suggests a 7 day creation going back 6000 years. These are statistics for the United States of America that will be different elsewhere.

Beyond ‘belief’ what is the reality of the Big Bang? Can we separate the facts from fiction?
In scientific circles, the theory of the Big Bang is an accepted theorem. Here’s is a very short list of some points, not all by any means on the pros and cons of the Big Bang question. You might care to look into more detail which I do cover in the first book of The Explanation series entitled Inventory of the Universe.

Proof of the Big Bang

All the above scientific points and many others fit into and are part of the overall Big Bang Theory, It is the ‘totality’ approach that lends reliability to the theory. There are however holes and conflicting data. The question is whether this clashing information is contradictory or whether it needs further explanation and clarification.

Questions about the Big Bang:

The present situation is that there are many, even a majority of scientific proofs to accept the Big Bang origin of the Universe BUT… there are plenty of grey areas that have to be worked on. The framework is definitely there, but some fine points still have to be straightened out.

One overriding point I suggest you keep in mind is that Big Bang is scientific information of the workings and physical functioning of our Universe. It’s like looking at a working atomic power plant and describing how the buildings, machinery, engines, electronics function to do what they do. And man, with his mind and his intelligence, is capable of doing that. Not that he doesn’t make mistakes and miscalculations along the way. He does, but he is capable of analysis and correction to reach an ultimate: This is how it functions.

What Science can not do is tell us where it all came from, why it started, whether there’s any real purpose for its existence. And, when it comes to the Universe, whether man, you and I, were programmed to be here and what our role is. Science cannot go beyond trying to figure out how our environs function.

As we saw, a vast percentage of people don’t believe in the Big Bang undoubtedly because it can’t answer these last questions. What about you? Can these non-scientific questions really be answered? If we want harmony, peace and prosperity, surely they need answers that can satisfy not just one half the population but everyone. That is the ultimate goal The Explanation has set for itself. Stay with me as we broach these big questions.

Since you read all the way to here… you liked it. Please use the Social Network links just below to share this information from The Explanation, Evidence the Big Bang is Our Origin. Is there Undeniable ?