The Spirit Power of Creation is the Theory of Everything 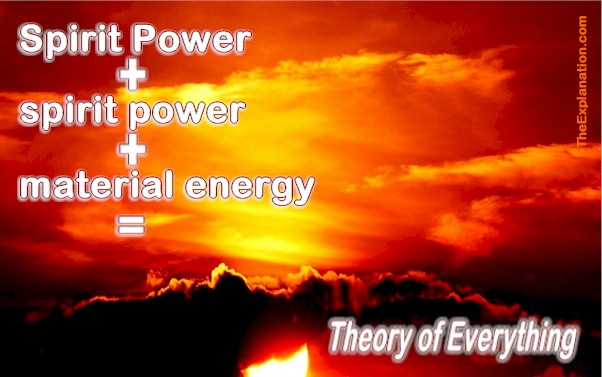 Mind-Body Problem Solved reveals the answer to a much deeper question. Spirit power, human spirit power, and material energy power. Here’s the theory of everything.

Ruach and the Creation of Everything is the title of this Section of the book Mind-Body Problem Solved. It is fitting to conclude with God’s Spirit Power because it characterizes the Theory of Everything. That’s the pot of gold scientists wish to find. Well, I won’t give you the mathematical equations, I don’t have a clue. But, if we want a Theory of literally everything then we must consider the spiritual world, which Science of course can’t do.
(Mind-Body Problem Solved, Chapter 34 – Table of Contents)

From the Bible, The Explanation has revealed the following.

These three keys define the focus of the entire Bible story, humans, as summed up in Genesis 2:7.

I’m going to make a rather provocative statement because of its importance. Your life, now and in the future, depends on your belief in the above three elements. Now, depending on how every human treats their MIND and BODY depends their peace and prosperity. The next Section of this book on psychology will expand on this. In the future because how humans work with the HOLY SPIRIT, SPIRIT MIND, and MATERIAL BODY depends their eternal life of peace and prosperity. The final section on spiritual conversion will expand on this.

For Christ also has once suffered for sins, the just for the unjust, that he might bring us to God, being put to death in the flesh, but quickened (G2227) by the Spirit:

The Holy Spirit quickens. See UnlockBibleMeaning.com for the meaning of quicken.

Christ’s body died (3rd element) but He was given back spiritual and spirit life by the Spirit (1). Just like His earthly life and ministry was by the Spirit. Mary was found with child of the Holy Spirit (Mat. 1:18), God  gave Christ the Spirit without measure (John 3:34). The Spirit (1) gives physical life (3 body and the Universe), the Spirit give spiritual life (2), and the Spirit (1) raises from the dead and gives Eternal Life.

How the Holy Spirit (1) works with human spirit (2) and material energy (3) is fundamental to understanding and faith. This equation includes EVERYTHING.

16 The Spirit (1) itself bears witness with our spirit (2), that we are the children of God:

These 3 elements, God’s Spirit, human spirit, and material energy represent the sum total of EVERYTHING. God’s realm, consciousness, mind, and our material world are fully interconnected.

This final chapter in the Section Ruach and the Creation of Everything proposes an alternative way of establishing the Theory of Everything, including both the entire physical Universe with its matter and the spirit power domain with neshama and ruach. The Explanation will go a step further and include the Holy Spirit (Ruach), which is part of God’s spiritual realm.

We have Bible evidence the Holy Spirit, the spirit in (hu)man(s), and the material energy all flutter, shake, beat in rhythm, and vibrate on specific frequencies. For the physical world, we can calculate them. For the invisible spirit world, we cannot; all we know is there’s no limit to the range of frequencies in the spirit realm.

I’m not expecting you to understand all of this. All we’re doing here is showing that there’s a relationship between the spiritual and the physical and that it has to do with energy waves in the form of frequencies.

The dust, neshama, and ruach of Genesis 2:7 have a minimal presence in the entire electromagnetic spectrum. But we function perfectly within that tiny range. At the original creation in Genesis 1:1 and during re-creation week in the rest of Genesis 1, God spoke, and the Spirit Power fluttered His sayings into existence. It energized and restored the physical energy packages that, through animated quarks, atoms, molecules, and cells, gave rise to all the inanimate objects and living beings on Earth.

The fluttering Spirit Power created energy packages of vibrating matter. Do you see the connection between fluttering and vibrating? That’s the common denominator of the Theory of Everything.

In Genesis 2:7, God breathed neshama into a dust body. Human thought-frequencies work with our human body and our human senses’ frequencies. All of this is perfectly coordinated by the transducer work of the brain. Humans, through their neshama, are on the same frequency as all other humans with whom they can exchange, reason, and communicate.

Likewise, through our neshama, we can be on the same frequency with God and exchange and communicate with Him. I’m calling them thought-frequencies because psychology talks about brain waves, but biblically, The Explanation has demonstrated that thoughts are mind-based, not brain-based. We can refer to mind-waves and mind-frequency. Of course, I don’t know what that frequency is, it’s spiritual, but it’s real. The consciousness and mind-waves communicate with the brain waves which liaison with the frequencies of our physical senses that, in turn, connect with the frequencies of the material and immaterial world around us; this is the Theory of Everything.

Look at the diagram with the range of frequencies, from the lowest (10-16 Hz)  represented by the most significant distance in the Universe, its diameter, to the highest (1035 Hz) represented by the tiny smallest distance, something like a quark or maybe the composition of Dark Energy or Dark Matter. We can’t grasp the extensiveness and tininess of the dimensions and frequencies discussed here.

Realize that BOTH ENDS of this graph REMAIN OPEN. Humanly, we’ve reached the absolute limit of what we can investigate, both the immensity and the petiteness. A good portion of this is mathematically established theory, which we are not even in a position to verify.

The open-endedness extends from gargantuan enormousness to infinitesimal smallness. For humans it is beyond our scope, for God, it is child’s play. From what science gathers physically, we’ve reached out to the edge of the known Universe, the lowest frequencies. At the other end of the frequency spectrum, we’ve also peered into the highest frequencies, but we don’t know what those minutest of minute elementary particles are. We do know they represent large packages of energy. However, unlike the edge of the Universe, we don’t know where the physical Universe starts on the high-frequency minute-sphering energy packet side of the spectrum.

But I do know that at both ends of this frequency spectrum, there’s a spiritual spectrum where the Holy Spirit carries on at both lower and higher frequencies. The Holy Spirit is the Spirit Power, Energy God used to create and transform the physical Universe. It is the Spiritual Force that encompasses the entire physical energy of which the Universe is composed. It is also the ultimate Force working with the spirit in humans. That’s what God told Job. God’s Energy is behind physical and spirit energy.

31 Can you bind the sweet influences of Pleiades, or loose the bands of Orion?

32 Can you bring forth Mazzaroth in his season? or can you guide Arcturus with his sons?

33 Know you the ordinances of heaven? can you set the dominion thereof in the earth?

34 Can you lift up thy voice to the clouds, that abundance of waters may cover you?

35 Can you send lightnings, that they may go, and say to you, Here we are?

36 Who has put wisdom in the inward parts? or who has given understanding to the heart?

All those questions reiterate what God, through the Spirit Power, accomplished in Genesis 1. And verse 36, Who has put wisdom in the inward parts? or who has given understanding to the heart? refers specifically to Genesis 2:7; breathing the spiritual neshama-consciousness and attributing ruach -mind that confer wisdom and understanding on humans. The physical and the spiritual are joined together by and with ONE Creator. There is the Theory of Everything. The Energy of God assembling the energies that make the Universe and Humankind function in such a fantastic way.

What is puny man that you, God, should consider him asked the psalmist?

3 When I consider your heavens, the work of your fingers, the moon and the stars, which you have ordained;

God’s Holy Spirit Power, with spirit neshama and ruach on the human plane, and all material animate and inanimate entities have a common denominator. That is fluctuating packages of energy. Regarding the physical Universe, we express this in terms of frequencies. God has endowed humankind and the Universe with many of His capacities, on a much lower human level, as Psalms 8 tells us. Nonetheless, this interrelationship of the spiritual and the material, the animate and inanimate, our present and future states fit wholly and neatly into the Theory of Everything.

Since you read all the way to here… you liked it. Please use the Social Network links just below to share this information from The Explanation, The Spirit Power of Creation is the Theory of Everything