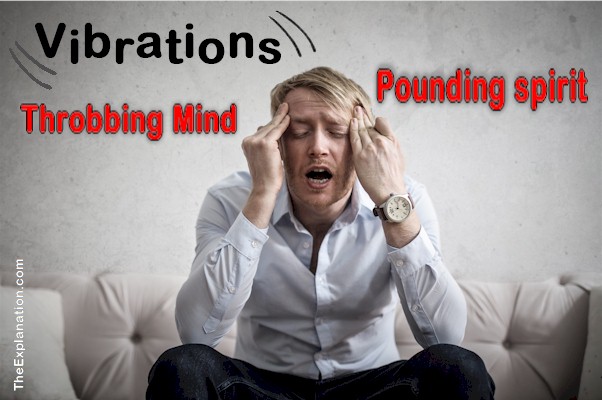 Vibrations are the surprising common denominator of everything that exists. Both visible and invisible. Here’s the impressive evidence.

Vibrations are like the regular beating of a drum, the pounding surf on a seashore, or a throbbing headache. When you feel your heartbeat, you’re in touch with a pulsating vein and can measure so many beats per minute. In fact, every atom and electron of your body is in continual movement. So is your mind.
(Mind-Body Problem Solved, Chapter 33 – Table of Contents)

Louis Victor de Broglie introduced the idea of vibrations and energy fields some 100 years ago, in 1924: “we proceed in this work from the assumption of the existence of a certain periodic phenomenon of a yet to be determined character, which is to be attributed to each and every isolated energy parcel.” Science has come a long way since then. We now know that our quantum-sphering material and immaterial world is likewise constituted of energy or vibration packets.

Vibrations of the spirit in (hu)man(s)

From a biblical point of view, The Creation in Genesis 1:1-2 reveals the relationship of the spiritual (God) to the material world. We saw that the ruach moves, flutters, and shakes from the biblical Hebrew. The Explanation associates this with vibrations and frequency. What about the spirit in humans, that is the mind, that INVISIBLE element, that science can neither see nor measure? Does other biblical Hebrew vocabulary confirm its vibrational nature? Yes.

And it came to pass in the morning that his spirit (H7307 – ruach) was troubled (H6470); and he sent and called for all the magicians of Egypt, and all the wise men thereof: and Pharaoh told them his dream; but there was none that could interpret them to Pharaoh.

Pharoah had two strange dreams (about the seven years of plenty followed by seven years of famine). When he awoke, he was perturbed. Genesis says his spirit was troubled. Put that in modern language and you get his mind was racing. Dreams take place at the consciousness level and our minds react accordingly. What does the Biblical Hebrew troubled mean?

Note the rhythmic pattern of H6470, the dreams were causing Pharaoh’s mind to pound. He maybe had a throbbing headache when you can literally feel your temples beating or your ears ringing. This is specifically referring to vibrations. We can almost say his mind was pulsating. Of course from a purely logical point of view that is nonsense: the mind is invisible and humanly we cannot attribute a visible phenomenon like pulsating to an immaterial essence.

But, the Bible does! Pharoah’s spirit moved in a beating regular, orderly (H6471 translation) way, like a bell (H6472 translation). I’ve put Strong’s numbers and the KJV translation to emphasize this is not Sam Kneller’s interpretation. This is what Biblical Hebrew tells us.

Here’s the point to take away from this chapter. The same word paam, used to describe the spirit in man, describes the movement of God’s Spirit. This is the link between Spirit (God’s) and spirit (human’s).

And the Spirit of the LORD began to move him [Samson] at times (H6470) in the camp of Dan between Zorah and Eshtaol.

You know the story of Samson and how God used him to battle the Philistines. From time to time, the Spirit had him accomplish feats.

God’s Spirit moving Samson refers to regular intervention. Strong expressed it wonderfully in H6470 with beat regularly; this is picked up notably in H6471 with the notion of time and its repetition, twice, thrice and steps. When we walk, we do so with a regular gait. A bell (H6470) doesn’t have to be struck regularly, but often is when used to tell time. Paam (H6470) is also used in Psalm 77:4 when David prays to God, “You hold my eyes waking: I am so troubled (H6470) that I cannot speak.” Often when we’re troubled, we have spasmodic breathing and a marked beating of the heart. Again, the concept of increased and more amplified frequency.

There are many ways to express the idea of move (push, budge, propel, advance…). The Biblical Hebrew has not just used ONE verb, but TWO. I think it is safe to say God’s Spirit and the human spirit advance in such a way. I believe that Biblically we can attribute this characteristic to S/spirit in the spiritual world.

The answer is quantum fields, discussed in the last chapter. Sphering energy pinpoints fill every nook and cranny of the Universe emitting waves on all possible frequencies. God’s Spirit is obviously NOT a quantum field, that’s absurd, but there is communal ground between the spiritual and the physical. What I am saying is that scientists are dumbfounded to realize the material world is composed of energy packets. What we call electrons, quarks, leptons, and consider to be particles are ALL packets of immaterial energy. The way they move around is via the fields with which they’re associated.

The material world is composed of energy packets that are in continual movement in the form of waves. When you sing in the shower, the air vibrates over your vocal cords, and you produce sound waves. If you’re good enough, your song vibrations will be heard via sound waves emitted as radio waves. Keep in mind that these are all regular beats. We’ve all played with magnetic waves and used electricity in the form of electromagnetic waves. The air is filled with light, TV, radio, Wi-Fi, microwaves, mobile phone, and other waves. Even smell is via waves, in fact, all five of the human senses result from vibrations.

We sense different colors and the gamut of sounds because the waves vibrate at different speeds and have different amplitudes. As you know, this refers to the frequency, which is calculated as vibrations per second. One vibration per second equals 1 Hertz (Hz). Below you can see that we humans have a hearing range of about 15-20 kHz. The diagram shows that 7 Hz and below are annoying and even dangerous. Brain waves are about 0.5 Hz to 42 Hz, so those infrasounds we can’t hear are within the range of our brain waves and can still hurt us.

Notice that a dog whistle is in the 23-54 kHz frequency range, and we can’t hear that. Whereas wind turbine noise is below our hearing frequency, dog whistles are above our range. A lot of animals have a much broader range than humans. 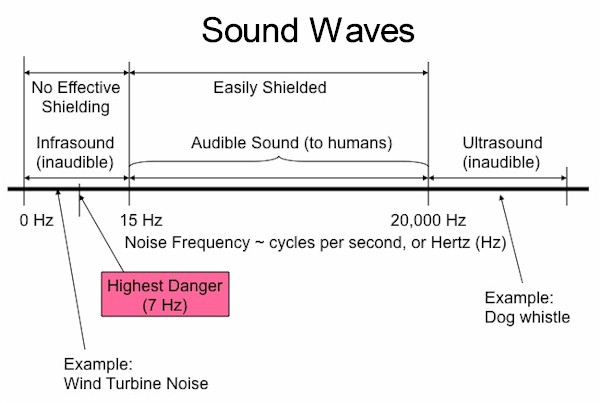 We’re indirectly discussing sound waves because that is how our human senses capture information. We like to say we humans are stardust. Now we must realize that dust is energy packets moving on quantum fields. Humans are waves, and we capture information via waves. God’s Spirit moves like waves, and He breathed the neshama in the first human and formed the spirit in him as well.

I submit to you that there’s a relationship between the spiritual world and the material world; the Spirit’s movement and human movement in the largest sense of the term. We are waves and as humans, we exchange waves of different frequencies with each other and the universe. When we pray to God whether vocally or in our minds, there’s a definite exchange between the human and the Spiritual.

Here’s another diagram with a much more extensive range of frequencies showing the shortest and longest that involve us. Notice that although we’re affected by all these frequencies, there are only two groups indicated on the graph that we sense, we hear radio waves and see visible light waves. The fact is, even within the useable range of frequencies, human senses capture just a very, very small portion of the wavelengths and frequencies. 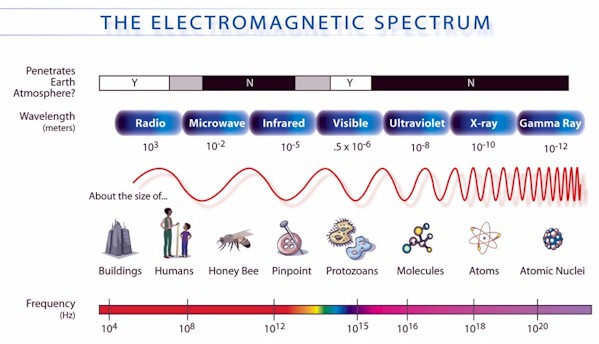 The movement of God’s Spirit represents the spiritual world. We now recognize the material world isn’t as material as we thought. The movement of waves characterizes our world and we are composed of trillions of packets of energy, each vibrating at a particular wavelength. Our earthly world is much more spiritual than we ever realized.

I want to leave you with one thought to which we shall return. Notice the Frequency bar at the very bottom of the above image; these are the frequencies with which humans are concerned. On the left, from lower than 10 to the power of 4 Hz, which is 10000 cycles per second, to the right end of the bar with far beyond ten followed by 20 zeros. From a very low frequency to a very high frequency.

But, here’s the point. That bar, with even lower and higher frequencies, is without limit at both ends! There can be both higher and lower frequencies ad infinitum. On the above electromagnetic spectrum, human senses only occupy the radio (hearing) and visible (seeing) frequencies and wavelengths. I want to be careful how I say this because God and His Spirit are in the spiritual world and are not concerned, in that sense, with the electromagnetic spectrum.

But the Spirit flutters, shakes, and beats regularly. Hmm, sounds like some sort of vibrational frequency? Humans are made in the image of God. There’s a definite relationship, some sort of meeting of frequencies, between the spiritual and physical worlds.

God’s Spirit paamed, moved Samson at regular times, Pharaoh’s mind paamed, was troubled, pounding with questions, and quantum sphering emits regular vibrations; we could easily use the verb paam, orderly movement, or regular agitation beats to describe it accurately. God’s Holy Spirit (with a capital S), the human mind, the human spirit (with a small s), and our entire physical Universe are characterized by vibrations, frequencies, and wavelengths. We are bringing the Spiritual, the spiritual, and the material worlds into coherent completeness.

Since you read all the way to here… you liked it. Please use the Social Network links just below to share this information from The Explanation, Vibrations. A Troubled Mind Pounding with Throbbing Temples