The Aral Sea Story – How Humanity Uses and Misuses Water 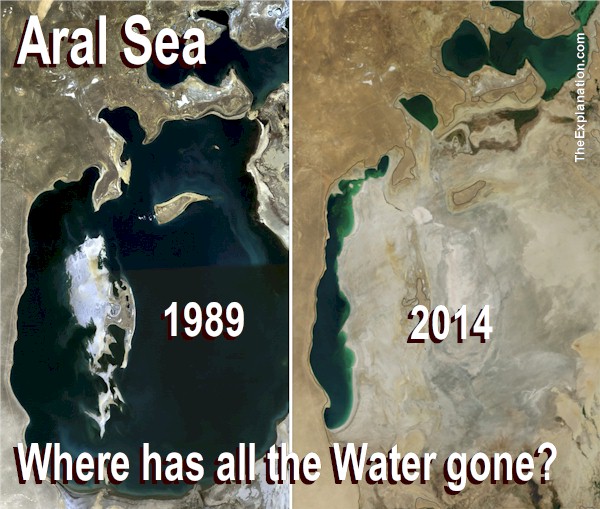 The Aral Sea is just one example of water shortage and humanity’s role in wasting this prime commodity.

The Aral Sea in 1989 and 2014. Diverting water has wasted this Sea and wreaked havoc with the livelihoods of those generations which depended on it.

“Next on the menu, food from Kazakhstan and Uzbekistan, and water from the Aral Sea, and souvenir T-shirts for everyone,” Galacti says, as the structure of the Water Cycle Café expands to accommodate the ancient lake. The problem is, the Aral Sea is shrinking, its water pumped out of the Water Cycle Café into cotton fields worked by Uzbekistan farmers.
(Audit of the Universe chapter 3.2)

During the past 60 years, the Aral Sea has diminished to one-fifth of its historic size and former volume. The mighty sea in our Water Cycle Café fractures into three smaller bodies of water totaling 13,000 square kilometers—ponds compared to the Aral Sea’s 64,500 square kilometers in 1957. Kazakhstan has turned the Northern Aral Sea around and whereas its shoreline was 100 kilometers from the port of Aralsk it is now only 20-25 km away, depending on the season of the year.

In Uzbekistan, cotton farmers and cotton producers have withdrawn and diverted the waters (much as the ancient Khmer did) through a network of channels to produce cotton, their national oqoltyn (white gold), for international export and local livelihood. In essence, Uzbekistan is one of the world’s leading cotton fiber manufacturers, along with India, China, America, and Pakistan.

The fate of the Aral Sea water goes something like this: the water diverts to soak the cotton fields for fibers to make T-shirts like the one Galacti is wearing that takes 2,720 liters of water to produce. As changes in the Aral Sea alter weather patterns, the growing season for cotton shrinks to 170 days (200 days are average), endangering the cotton crops as unproductive farmland increases.

As a side effect of wasting water, desertification converts 45,000 square kilometers of land to barren waste that yields 100 million tons of saline-laden dust that creep into the lungs of children and livestock, causing pneumonia in children and suffocating cattle. In Aralsk, Kazakhstan and Muynak, Uzbekistan, towns on the Uzbekistan-Kazakhstan border, villagers with respiratory illnesses, anemia, kidney and liver diseases, cancer, and tuberculosis from drinking polluted water, leave their homeland in hopes of reversing worsening health.

The story is a little more encouraging as we look to the southwest of the Aral Sea and change the menu.

In Israel, the major sources of water, such as the Sea of Galilee and the Coastal Aquifer, which provide fifty percent of the water to Israeli households, were mismanaged. In essence, lead and other pollutants seeped into drinking water; dead fish lined dry bed areas of rivers, sea pollution closed beaches, a growing population increased the demand for water, and decreased the water available for agriculture. Thirty-three years ago, the problem was so severe farmers faced losing their farms. At present, Israel has reversed its national trend of pollution, salination, and overconsumption of water. The country’s Water Authority and significant companies located in Israel have worked in concert to correct the water deficiency and misuse.

The country now recycles 80 percent of its wastewater or 400 million cubic meters. Using the figure of 1600 cubic meters of water per ton of cereal grains, specifically wheat, it is enough to produce 250,000 short tons of grain. That’s nearly a quarter of all domestic wheat consumption in Israel from 2011 to 2012 (900,000 tons).

Although drought is challenging the nation’s wheat production, Israel is the only nation that has doubled its water productivity in agriculture, reducing its per-hectare water use in its crop fields by 37 percent and using highly treated wastewater for irrigation. In addition, seawater desalination plants transform water from the Mediterranean into potable water and treat brackish groundwater. Israel’s water reclamation success is so great that it now sells water-cleaning tablets to UNICEF, which uses them in humanitarian aid to Syria.

We eat Israeli wheat at the café to celebrate Israel’s accomplishments. However, even with this positive news, we view sobering visuals of experts predicting in 2009 that in 50 years, the world’s water supply will collapse, can we possibly create water, and from what?

The Water Cycle Café offers a demonstration of water bottles that can create water from evaporation and condensation in the air, as well as other nifty inventions.

Scientists have extended their imagination globally to address the problem of water shortages. First, a collaboration by a corporation involving scientists in America and Ireland is creating a nanotechnology bottle that extracts water from the air to refill itself, based on the biology of the Namib Desert beetle in Africa. However, in operation now, the Waterboy, an American invention, is extracting water from the air in Manila, Philippines.

The US-Philippines team has chosen Manila because plastic water bottles clog the drainage systems in the city, disrupting the water cycle and causing major flooding during typhoon season. To address this problem, the WaterBoy takes condensation/vapor from the air to produce water, cutting down on 11,000 half-liter plastic bottles that would otherwise wind up in landfills and drains. That’s enough bottles to build almost two’ bottle schools’ (two classrooms each) using plastic bottles and other construction materials in Guatemala and El Salvador, half a world from the Philippines. While the ‘bottle schools,’ conceived of as a way to reuse throwaway productively plastic, can educate and assist, a better option might be to eliminate the trash.

WaterBoy takes condensation/vapor from the air to producing up to 30 liters of water/day, eliminating over 11,000 half-liter plastic bottles per year Click To Tweet

What about the water we do have? What are we doing with it?  Aside from industrial uses, water has three main functions in human life: transport, cleansing, and nourishing (this includes animals, crops, and drinking water).

This blog post is an excerpt from chapter 3.2 of the book Audit of the Universe

Since you read all the way to here… you liked it. Please use the Social Network links just below to share this information from The Explanation, The Aral Sea Story – How Humanity Uses and Misuses Water