Water to Transport People and Goods or a Giant Garbage Patch 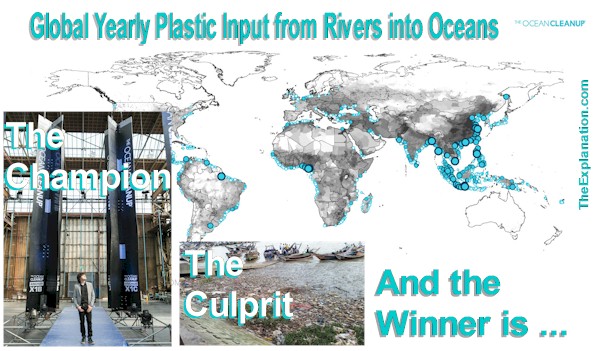 Vegetable patch or garbage patch? We’ll take the former anytime. But, humankind is creating the latter in our oceans, of all places.

Garbage patch of plastic. Simply put, water transports more than ocean vessels—in plants and in most living creatures it carries nutrients, chemical reactions take place through water transport, and water facilitates travel. One of the functions of a river is to transport nutrients and minerals and raw metals in sediment, such as tin, gold, calcium, platinum, silica, salt deposits, and so forth to the soil and to oceans and lakes, similar to the way water in the body functions.
(Audit of the Universe, chapter 3.3)

However, as a direct result of humankind’s inventiveness and our ability to transform these same raw materials into usable commodities like various forms of temperature resistant, resilient and dense plastics, our rivers and waterways now transport various but numerous products of our throw-away societies around the world.

When it comes to plastic objects–you name it, we even now have 3D printers creating replacement body parts–not just for cars but for the human body. Coupled with this, we’ve developed more ways to divert water, such as pipes and canals, which transport our sewage and junk via streams and rivers. Ultimately, reaching deltas and estuaries only to wash out to sea where the saltwater both breaks this trash into minuscule irrecoverable size chunks as well as swelling our garbage laden oceans.

“The ocean currents transport stuff that ancient peoples could not have dreamed,” Galacti says. “Shipwrecks and debris were common, and cargo and debris washed up onshore. But now, with globalization, you can transport plastic bottles, which would have been unheard of a century or two ago.”

UNESCO has designated them collectively as a symbolic federal state called Garbage Patch. These garbage patches/gyres are plastic smorgasbords of water bottles, beach balls, plastic forks, DV cases, Styrofoam containers, plastic bags, and other trash blown into the ocean from landfills or even dumped overboard by oceangoing ships.

Although plastic endures, its components break down rapidly in water. Galacti points to a Styrofoam container and, with his microscopic vision, observes its polystyrene molecules, heavier than the water molecules, break down and dissolve in the ocean, creating small fragments called nurdles. Most of the plastic, however, can last for decades or longer.

We feel buried in all this plastic, about 50,000 pieces of trash per one square mile of the ocean or given the 614,517,609 square miles of ocean, 7 trillion penny-sized fragments of debris or enough to fill the U.S. Sears Tower three times. What does this avalanche of plastic mean for the water, for animals, and humans?

Consider fish and birds such as the albatross. Albatross chicks in the Pacific ingest five tons of objects such as a plastic cigarette lighter from Japan, a plastic child’s toy, and bottle caps. As a result, many of these chicks die because of the space the plastic takes up in their stomach. Or, they have punctured lungs and ingest harmful chemicals that attach to the trash.

As for the fish, primarily small filter feeders such as herring, tilapia, and goldfish, they suck in the nurdles, about the size of fish food pellets. In so doing, they ingest all the harmful chemicals such as BPA, PCBs, and phthalates, which kill the fish or change their sex from male to female and vice versa. If the fish survive their phthalate (cancer-causing chemical) diet, the plastic toxins get passed on to birds, larger fish, sharks, and humans that consume fish.

In 2013 a visionary 18-year-old, Boyan Slat, launched Ocean Cleanup, an organization dedicated to ridding the Oceans of the truckload of plastic, specifically targeting these monstrous garbage patches.

They have developed technology with buoys and skirts to garner vast quantities of this trash and concentrate it for easier removal, bringing it onshore for treatment and recycling into needed raw materials. Ocean Cleanup has done many tests in the North Sea where oceanic conditions are much more severe than in the Pacific. Their plan is to deploy the first experimental cleanup system in the Pacific in 2018. They project being able to rid that garbage patch of 50% of its harmful contents in 5 years. The least that can be said is here’s a concerted effort to try to overcome this blight.

We can’t put the responsibility for trash and pollution in the ocean solely on seafarers. The vast majority of the plastic is disposed of or tossed away on land. We add some 5,000 tons of plastic solids, the equivalent weight of 65 space shuttles, to the oceans every day. Now it’s time to not only start removing it but stop feeding the garbage patch.

We add some 5,000 tons of plastic, the weight of 65 space shuttles, to the oceans every day. Click To Tweet

Is the bottle half-full or half-empty, or in this case, are the world’s oceans getting trashier or cleaner?

This blog post is an excerpt from chapter 3.3 of Audit of the Universe

Since you read all the way to here… you liked it. Please use the Social Network links just below to share this information from The Explanation, Water to Transport People and Goods or a Giant Garbage Patch